Gallagher scores on both sides of ball to boost Radnor 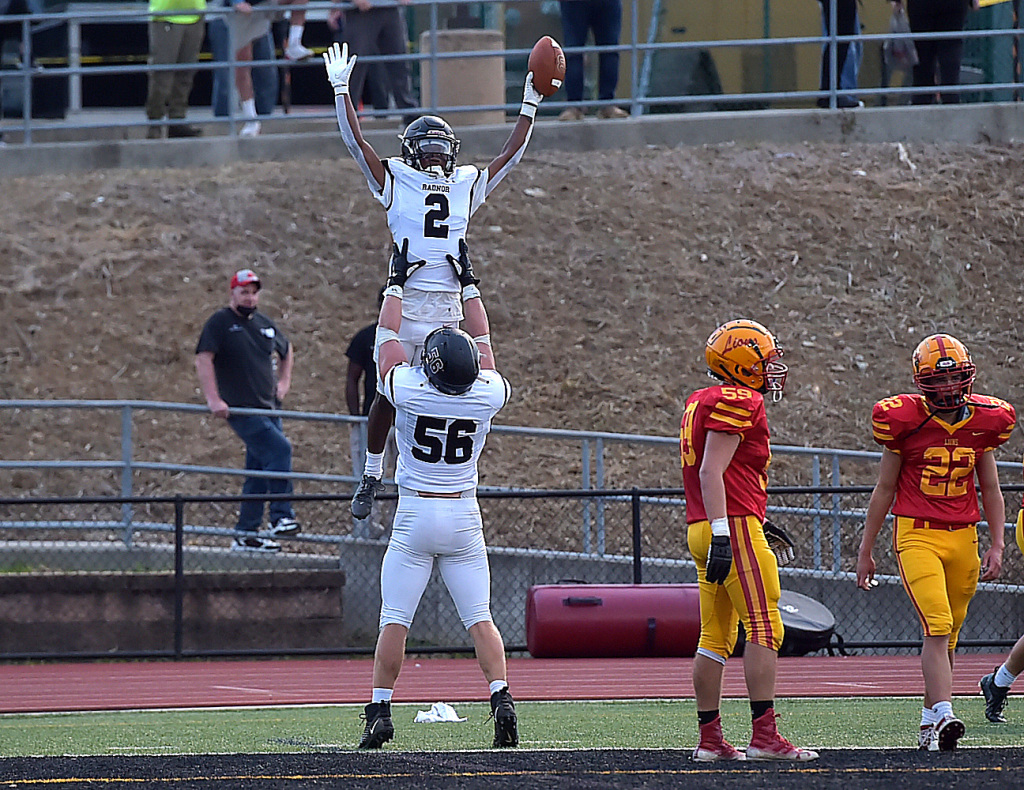 Radnor's Amir Byrd gets a lift from lineman Jack Condran after Byrd scored in the first half against Penncrest Friday evening. The Radnor Raptors went on to a 35-7 victory.

This week, the Radnor High senior stayed inside when it was playtime.

Gallagher caught a touchdown pass in the second quarter as an inside linebacker, then grabbed scoring strikes from his tight end position in the third and fourth quarters to help visiting Radnor open its Central League schedule with a 35-7 victory over Penncrest at Louis Scott Stadium Friday night.

The win was the first for the Radnor Raptors following the school’s decision to change mascots at the conclusion of the 2020-21 school year.

Amir Byrd’s six-yard sprint late in the first quarter had put the visitors on top. Two plays into the second quarter, Gallagher picked off Penncrest’s Nick Chelo, who went all the way at quarterback for the Lions while Jimmy Cage was resting a shoulder injury. Gallagher won the 45-yard dash to the end zone for six more points.

“I just started playing inside linebacker this week,” Gallagher, who is headed to the University of Notre Dame to play lacrosse, said. “I just saw the pass and got there to get it.”

Radnor’s Jude Wallin is chased down by Penncrest’s Zach Puckett in the first half Friday evening. (Pete Bannan/MediaNews Group)

Gallagher and Damian Falcone (95 yards rushing on 11 carries) made plenty of tackles as Radnor (1-1, 1-0) shut down Penncrest (0-2, 0-1) in the first half. The Raptors went 55 yards in five plays for their first TD of the second half. Quarterback Jude Wallin teamed with Gallagher on a 16-yard scoring play, with Gallagher making the catch while on the seat of his pants in the end zone.

“We did better this week, but I know I still have things to work on,” Wallin said. “The offensive line played well tonight.”

The Wallin-to-Gallagher combination had a five-yard scoring connection early in the fourth quarter, and Wallin’s short toss to Amir Byrd with 5:45 to play turned into a 22-yard play and six points as the Raptors turned on the mercy clock.

“We were very frustrated with what happened to us last week,” Gallagher said about Radnor’s overtime loss at Oxford. “We had a good week of practice and played better in this game.”

For Radnor coach Tom Ryan, his goal remains “to improve every week.

“Our offensive line was very improved today,” Ryan said. “With this extra week of practice, things have been coming together better.

“Coach (Ryan) Smith and his (Penncrest) team did a great job against us. Their linebackers were giving us fits.”

Mike Burke was the Lions linebacker doing the most to frustrate Radnor’s offensive plans. Brennan Kaut, who did not have a carry in the first half, picked up 59 yards on 10 rushes in the final two quarters.

A 21-yard pass from Chelo to Dylan McDougall (four catches, 50 yards) with 29 seconds left prevented Penncrest from being shut out.

“We didn’t win the football game,” Smith said, “but I was proud of the way we played with enthusiasm and energy. We just have to work at practice and get better and give our chance to win some football games.”