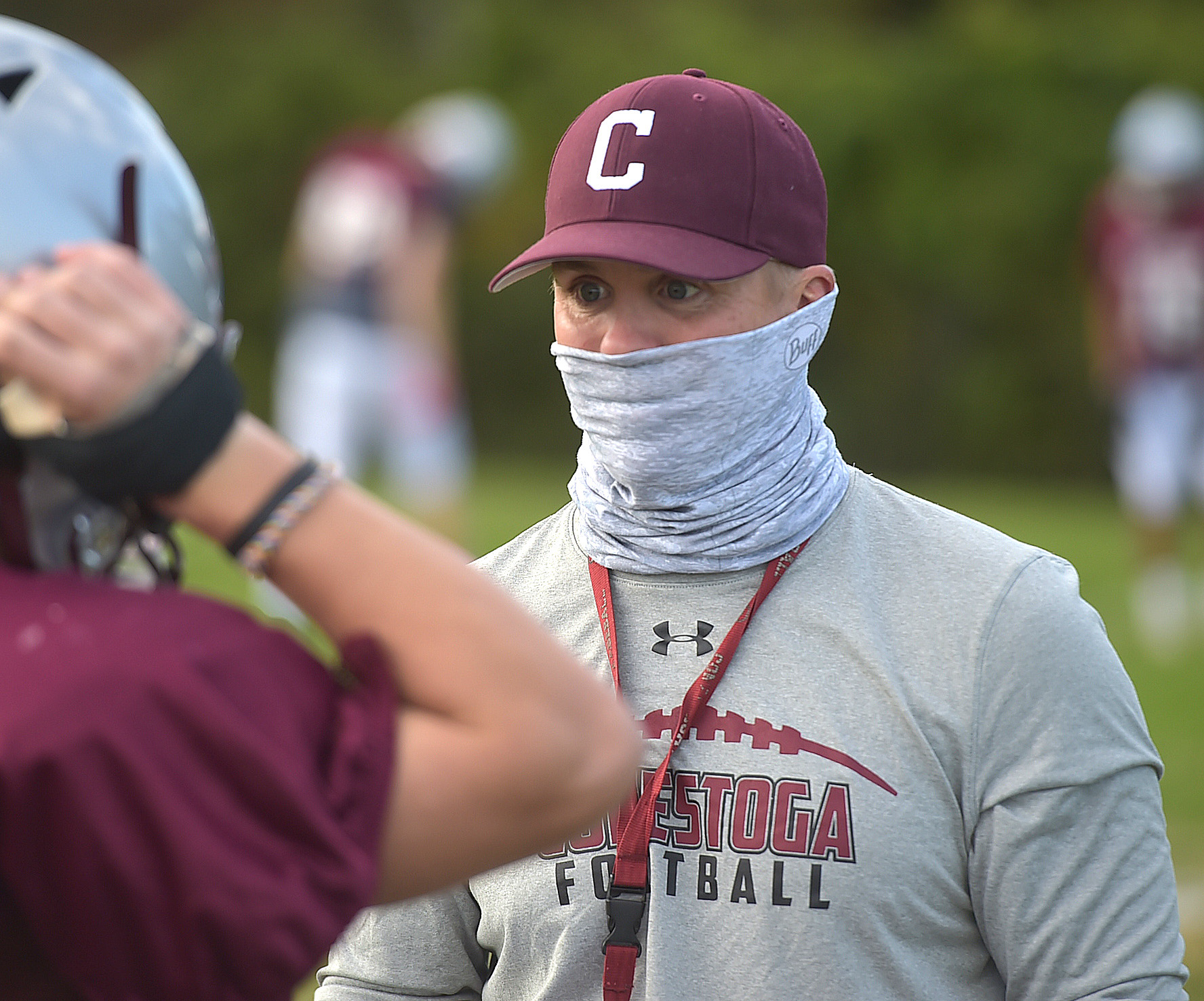 TREDYFFRIN >> Resilience paid off for Conestoga in a 17-14 overtime win over Owen J Roberts Friday evening in the Pioneers’ season opener at Teamer Field.

A weather-related delay pushed back the start of the game for 45 minutes, then, on OJR’s first play from scrimmage, standout running back Avrey Grimm broke free for a 94-yard touchdown.

But the Pioneers kept bouncing back, scoring two touchdowns in the final 7 1/2 minutes of regulation.

“The key for us tonight was perseverance and the kids believed,” said Conestoga head coach Matt Diamond. “We have a saying around here for a success equation – event plus response equals outcome. I told them, ‘You don’t always control the events, like the weather before the game, the delay with the officials (due to bad weather), but your response is 100 percent in your control. I told them, Respond, respond, respond,’ and they did that and I’m so proud of this football team.”

After Grimm broke free to give OJR a 7-0 lead, the visitors held that lead until early in the fourth quarter. The Pioneers were pinned on their own 6 yard line, but Conestoga quarterback Calvin Shirley lofted a long pass down the right sideline that standout receiver Peter Detwiler grabbed for a 37-yard gain. Five plays later, Shirley hit Patrick Reilly down the right sideline for a 47-yard gain to the OJR 1 yard line. Shirley scored on a quarterback sneak, and with 7 ½ minutes left in regulation, the game was tied at 7-7.

Just one minute later, Grimm broke free down the left sideline for a 59-yard touchdown run to give the visitors a 14-7 lead with 6:14 left.

Then it was Conestoga’s turn to bounce back again. On fourth-and-3 from the Pioneers’ 39 yard line, Conestoga went for the first down, and Shirley hit Reilly with a short pass down the left side. Reilly made a couple of nice moves and eluded tacklers for a 61-yard touchdown. Jonah Stein’s extra point tied the score at 14-14 with 4:20 left in regulation.

“[Shirley] settled in, and did a good job, and that was a big fourth-and-3 conversion,” said Diamond. “Patrick Reilly came up big for us as well.”

Neither team moved the ball appreciably in the remaining 4:20 of regulation, and the game headed to overtime. Conestoga got the ball first at the 10-yard line, and on fourth down, Stein booted a 30-yard field goal to give the hosts a 17-14 lead.

Then it was Owen J Roberts’ turn. A five yard penalty against the visitors was followed by a couple of short runs by Grimm, then an incomplete pass. OJR’s 31-yard field goal attempt was blocked, and the Pioneers had their opening-game victory.

The Pioneers’ defense held strong Friday, and linebacker Mike Austin made some timely stops throughout the contest.

“He made some great stops tonight,” said Diamond. “I told him tonight it would take 48 minutes. Well, it turned out to be a little more than that (laughs).

“We’ve been waiting two years to get back to (full capacity) fans, and we didn’t disappoint them. Hats off to Owen J Roberts, who played a heck of a game, but I’m so proud of our kids, we’ve been knocking on the door. I told our kids, ‘Don’t be timid, go in and bust that door in,’ and I’m so proud of them.”

For Owen J Roberts, Grimm finished with 238 yards in 21 carries. But the visitors had trouble putting together a sustained offensive drive in the first half – on their second possession series, they committed three false start penalties.

In the third quarter, holding a 7-0 lead, Owen J Roberts made a gutsy fourth down call when they went for the first down on fourth-and-1 from their own 47 yard line. Grimm pounded up the middle for that vital yard, and the first down, but the drive ended six plays later on a pass interception by Detwiler.

OJR head coach Rich Kolka, whose squad opened the 2019 season with a 28-0 win against Conestoga, said, “I think we learned tonight that we need to play a complete football game to win it. I think we made a lot of mistakes on offense in the first half, especially with the penalties and dropping passes. Then we took the [14-7] lead and we made too many mistakes on defense. We made mistakes all over the place.”