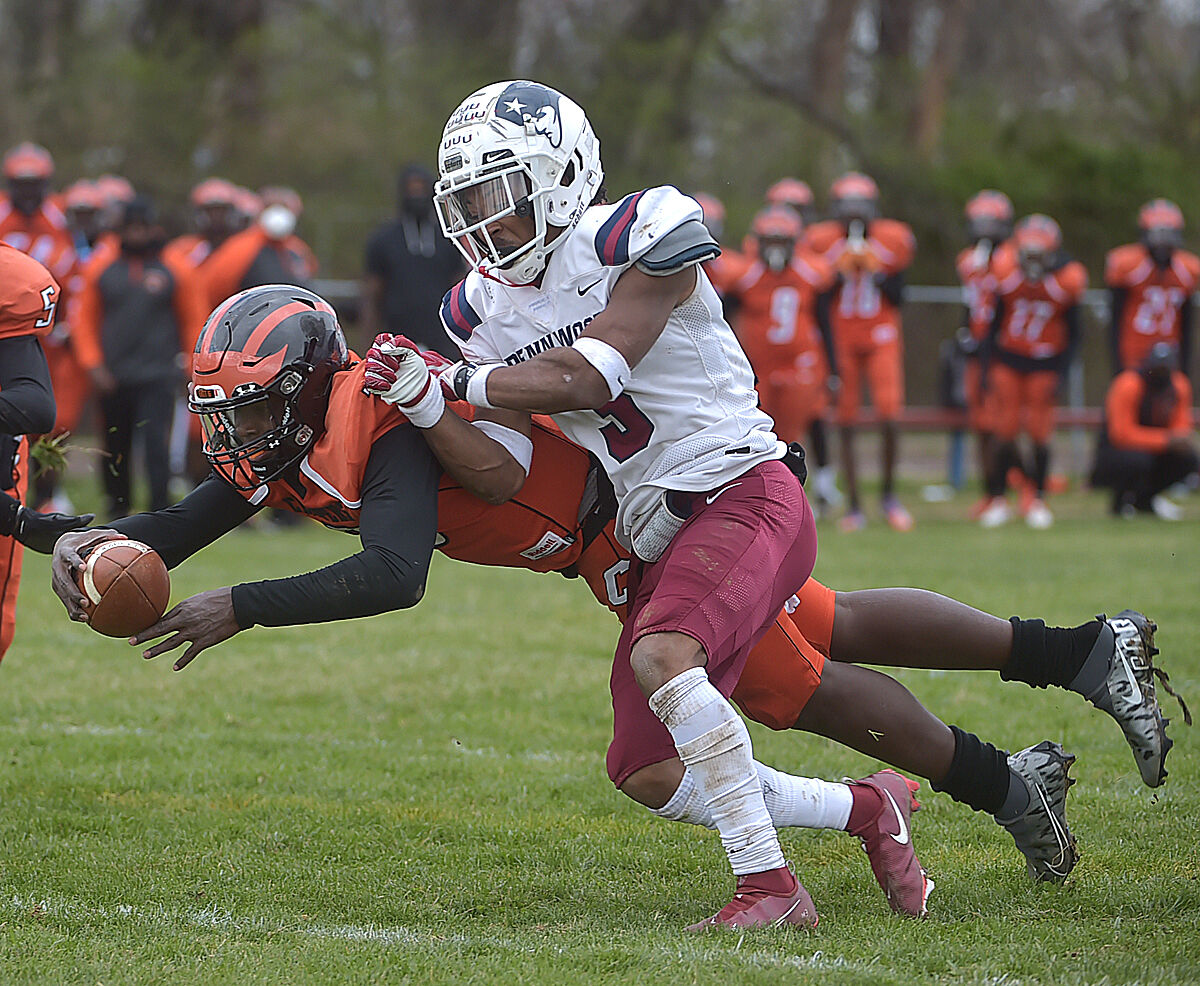 Chester quarterback Isaiah Freeman dives across the goal line past Penn Wood's Malik Brooks during a game last month. Freeman ran for a touchdown and threw for one as Chester beat Harry S. Truman, 26-18, for the United X Championships Saturday. (Pete Bannan/MediaNews Group)

Trailing at halftime isn’t something Chester has gotten much experience with this season.

But in a week unlike any other – an “emotional storm,” head coach LaDontay Bell called it – to cap a season unlike any other, a two-touchdown deficit is fairly low on the Clippers’ scale of adversity.

With a significant defensive adjustment and the leadership of quarterback Isaiah Freeman, Chester rallied Saturday afternoon, scoring the final 20 points of the game to earn a 26-18 win over Harry S. Truman in the United X League championship game.

Truman led 18-6 at halftime, thanks to three touchdown connections between quarterback Terrell Delp and Sincere Thomas. But Chester adjusted and took the lead with 2:47 left in the third quarter on Freeman’s four-yard touchdown run.

The game was supposed to be played last week, with Truman already on the bus before a positive COVID-19 test in the program caused a no contest declaration. Bell said that 11th-hour cancellation “pummeled the motivation and the momentum of our locker room.” But after regrouping Monday, he and Truman coach Ben Johnson jumped through the hoops needed to get the game rescheduled, a decision finalized Wednesday.

Chester was slow to warm to the game, giving up three scores in the second quarter. Delp, who missed Truman’s last game with an injury, hit Thomas for a 58-yard touchdown to open the scoring. They capped the half with a 24-yard connection with seven seconds left, Thomas collecting six catches for 148 yards in the first half for Truman (2-2).

In circling the wagons at halftime, Bell and his staff made two changes. The first was to deploy Darron Miller, who’d caught a 22-yard score from Freeman for the only Clippers score of the first half, as Thomas’s shadow, the lanky linebacker shifting to the secondary to keep Thomas under wraps.

The second was a larger question for his Clippers’.

The second-half shutout, from a team that didn’t allow a point in its first four games, showed how well Chester (5-1) did that. It gave the offense time to operate, with Freeman leading the way. Cy’Heem Bacon trimmed the deficit by recovering a fumble in the end zone, Freeman trying to plunge in from the 1. The score was set up by Freeman hitting Jason Stone on a long completion, Chester’s modified version of the Philly Special with a double-reverse and a Cymeer Bacon lateral to Freeman.

Freeman put Chester up for good with a draw for four yards to paydirt, then Anton Sterling added a one-yard score. Freeman in particular was outstanding, and not just between the lines.

“To see his maturity, to talk to the players away from the huddle, away from the football field, means a lot,” Bell said. “He’s been one of the captains. I understand that the quarterback is one of the captains anyhow, but he was just there for leadership. This young man is truly a leader: Talking to the players, understanding the play calls, rallying the team together, always encouraging.”

This one (and hopefully only) spring football season has offered to many lessons in perseverance and resilience. This last week has been the capstone on that, and Bell didn’t pass up that teaching moment, on something only tangentially about football.