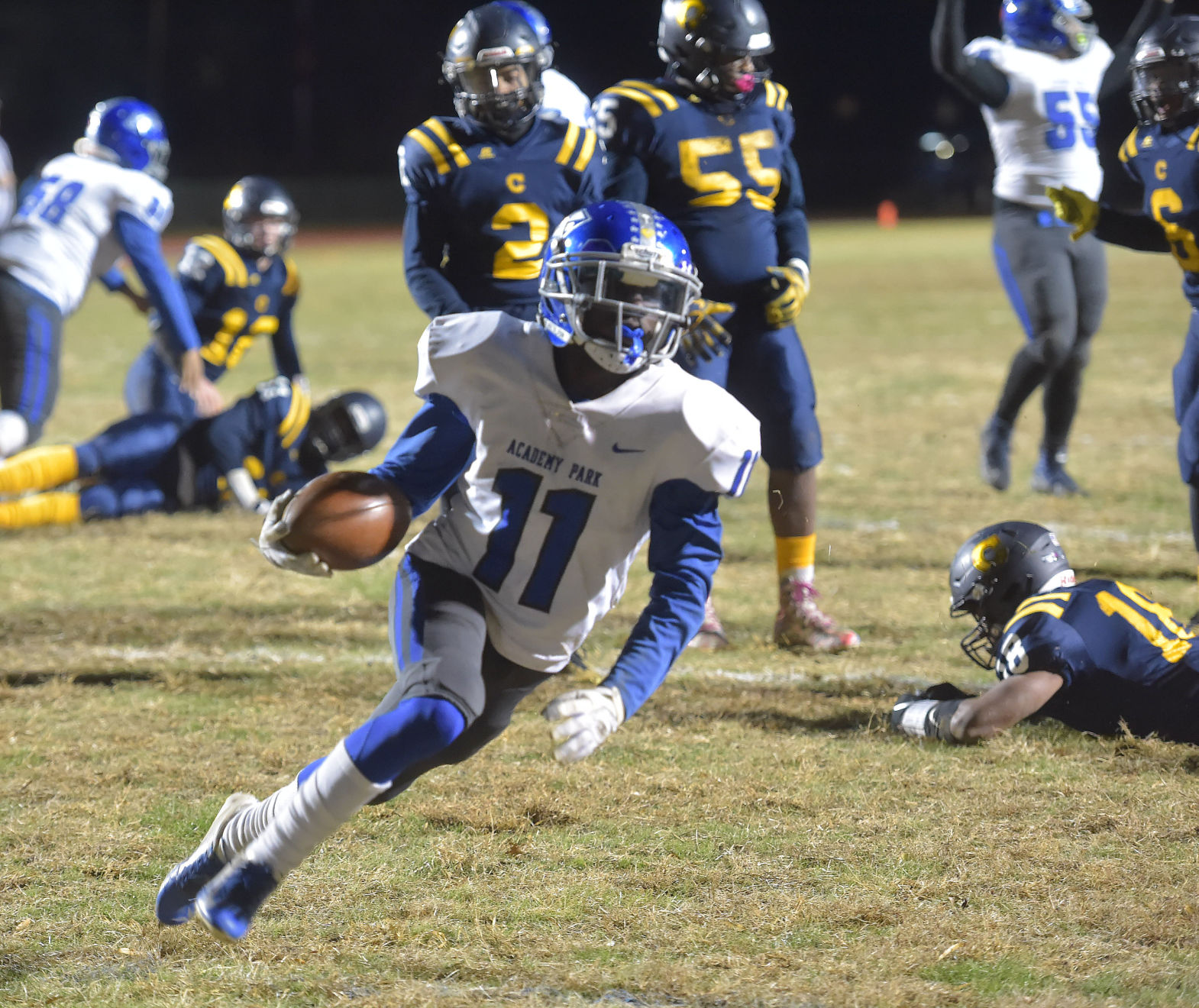 CHESTER — Academy Park’s Anthony Rodriguez heard all about Chester’s dominance this season. The Clippers were undefeated and hadn’t allowed a point in their four games prior to Saturday’s clash of Del Val League rivals.

Rodriguez believed the Knights would be the team to end the Clippers’ streak of not being scored upon.

“In my mind, this could be my last game, so let’s go out with a bang and show them that we can do it,” the senior quarterback said. “And we wanted to leave her with the win.”

AP, Chester and Penn Wood all finished 3-1 against Del Val opposition. Whether there will be banners or championship jackets remains to be seen. The United X League title will be determined next week between Harry S. Truman and Chester, which, due to tiebreakers, will host the championship game.

Rodriguez connected with junior wide receiver Eric Willis for the go-ahead touchdown pass in the fourth quarter. Moments later, freshman Camir Jones intercepted an Isaiah Freeman pass and returned it to the five-yard line. Ibrahim Sanogo then ran across the goal line on the next play to put the game out of reach.

“The ship has fallen,” Sanogo said, poking fun at the Clippers’ “ship has sailed” mantra. “We always believed. They’re a good team, but we’re AP. We were ready for them.”

Coach Jason Vosheski lauded his players for putting forth their most complete game of the season.

“It usually takes three or four games to get acclimated and to get everything down. But like I told them, we had our best week of practice,” he said. “It’s not even about the execution; it’s more about the atmosphere and energy, it’s everything. The kids bought in this week and they played great.”

The Knights poured cold water on Chester’s senior day and avenged a difficult loss at Chester in 2019.

“It was the point thing, the fact that it was Chester, and the way last year ended. All of that,” Vosheski said. “Some of the guys that were on that team I think had a bad taste in their mouths. But I think they were more happy about beating Chester than the zero points thing, because most of our kids probably didn’t even know that.”

Rodriguez had a pair of long touchdown runs, the first a 22-yard scamper with 3:37 to go in the first quarter, the first points allowed by the Clippers this year. Later in the first, Chester’s defense made a play when Darron Miller scooped up an AP fumble and sprinted 25 yards to the end zone.

Two minutes into the second period, Rodriguez scrambled down the Knights sideline and covered 64 yards for another touchdown.

“Every game that we have, our mindset is to go out and win, no matter who we play,” said Rodriguez, who completed 7 of 14 passes for 77 yards. “Like I told our guys in the beginning, we’re going to play our hardest from start to finish and that’s exactly what we did.”

The score stayed that way until the final minutes of the game. Rodriguez threw a perfect strike to Willis, who was left wide open in the end zone, and the duo connected again on the two-pointer.

“We put in a lot of work together in the offseason,” said Willis, who had five catches for 55 yards. “We have that bond, that connection, so he’d know where I’d be at. I told him what I was going to do, and he trusted me. I trust him, too.”

Sterling had carved up opposing defenses all season, but the Knights held the senior to 22 yards on 13 carries.

“Our linebackers and defensive linemen did a great job,” Vosheski said. “That kid’s good, and he’s a four-year starter, and he’s a bowling ball, and if he gets a head of steam he’s tough to stop. So, us getting him in the backfield was key.”

Academy Park managed to piece together a successful 4-1 season, even though the odds have been stacked against them from day one. AP is the only Delco high school that opted for all-virtual learning for the entire 2020-21 school year, meaning student-athletes were barred from entering the building to use the weight room and other resources. This fact placed the Knights at a disadvantage over their Del Val brethren, but they never made excuses.

“It hurts leaving my brothers,” said Rodriguez, who also plays baseball for AP. “I was super excited coming in here and winning this game. We went out on top.”