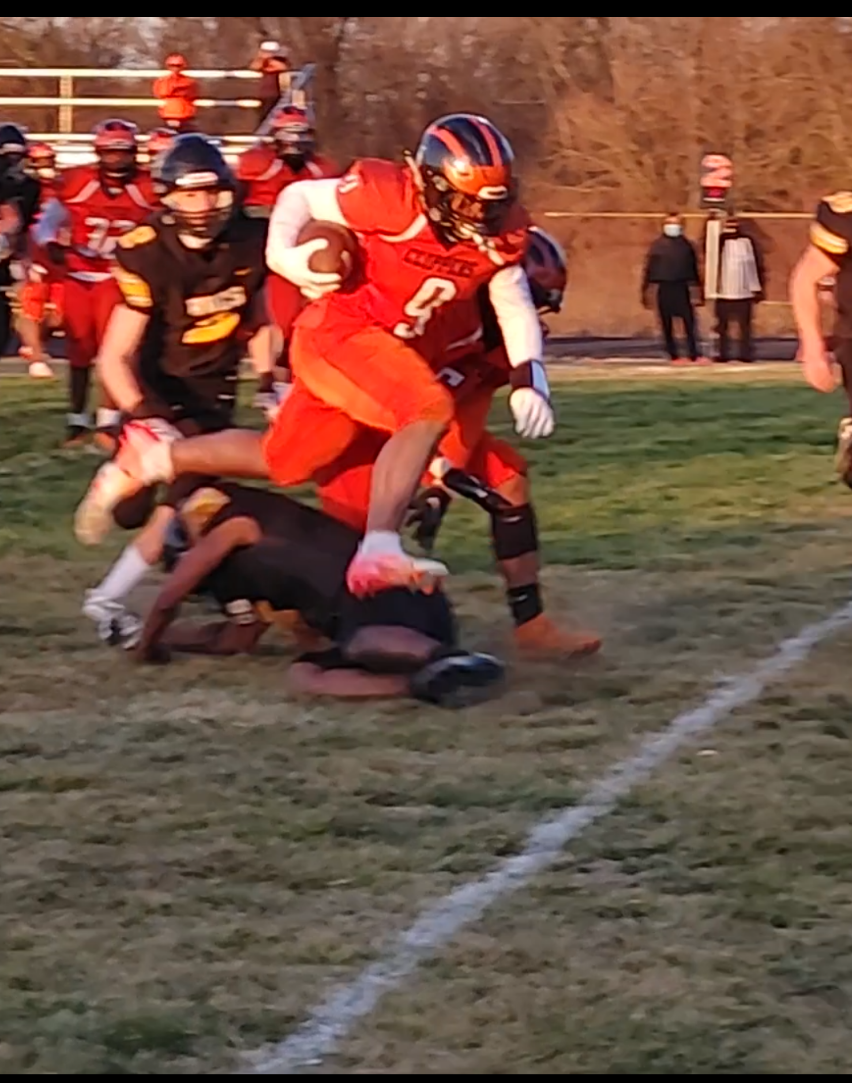 Chester's Anton Sterling bulldozes his way over the Interboro defense for his third touchdown run on Saturday. Sterling and the Clippers rolled to a 30-0 win.

First, the defense was dominant. The Bucs had no chance containing the Clippers’ speed and strength. It was a mismatch from the opening kick.

“Just look at the score,” senior Jakai Boegertey said, referencing the 30-0 shellacking at South Avenue Athletic Complex. “We all came out here and competed and we got the win.”

“We had a short time to be where we’re at right now, only two weeks to be ready,” added linebacker Kenny Winters, who transferred from Bishop McDevitt in Harrisburg prior to the school year. Originally a Chester kid, Winters was involved in several tackles and sacked Interboro quarterback Abu Kamara in the end zone for a safety.

“The scoreboard says it all,” he added.

The second thing the Clippers can feel happy about is knowing they have a workhorse at running back whose sole purpose is to run over defenders. Anton Sterling carved up the Interboro defense to the tune of 115 yards and three touchdowns.

“I want to be stronger every time I play,” Sterling said. “No matter who I play, I want to get stronger and run through everybody. That’s my idea.”

Chester coach Ladontay Bell was understandably emotional after leading his group back on the field for the first time since Oct. 26, 2019, when they defeated Interboro, 60-13. On Saturday the Clippers spoiled the head coaching debut of Dennis Lux, who is replacing legendary Bucs coach Steve Lennox.

The coronavirus pandemic forced the Del Val League to cancel its fall sports seasons. The league joined forces with Father Judge, Norristown, Cheltenham, Harry S Truman and Reading to form the United X League this spring. The season will run for six weeks.

Bell was proud how his guys stayed together during an offseason that never seemed to end.

“I thought about my seniors,” Bell said. “During this last year I was getting phone call after phone call, with them asking me, ‘Coach, are we having a season?’ I said, ‘Guys, I don’t know, but be patient. And be ready.’ And they did that.

“There were times I would go out in the community and see those guys working out and staying prepared. I started calling the guys and they would just say to me, ‘Coach, we’re just waiting to get the go. We’ll be ready.’ Once I told them the word ‘go’ they’ve been locked in and focused. I’m proud. I could see it today that they were really focused.”

The Clippers held the Bucs to minus-10 yards of total offense. Interboro didn’t manage to get a first down until midway through the fourth quarter. The Chester defense was buzzing all day. Boegertey led the attack, recording double-digit tackles. Dorian Miller had an interception from the secondary. Offensively, the Chester running game produced 214 yards on 44 carries.

“I was really impressed with the guys’ tempo. In the beginning we were a little shaky and at halftime we made some adjustments. Overall, I was pretty impressed with Week 1,” Bell said. “There are some things we definitely need to work on because we have a nice opponent with Chi coming up and that’s going to be a game that’s very intense and very heated. We’re planning to be prepared.”

As expected, the play wasn’t pretty in the beginning. Interboro was called for four unsportsmanlike conduct penalties. Several times the Clippers had trouble getting off clean snaps out of the shotgun. First-year starting quarterback Isaiah Freeman, a Strath Haven transfer, settled in and was 7-for-16 passing for 70 yards, including a 29-yard touchdown to William Smith on a screen play. Freeman also scrambled for 62 yards.

“Once we started to get the feel of the game in the second half, the offense started rolling,” Freeman said. “We had a couple of mishaps in the first half, but other than that, it felt good to get back out here, to play with the guys and just have fun.”

In other United X League games:

Penn Wood 14, Academy Park 13 >> Malik Brooks scored both touchdowns for the Patriots in a game in which no fans or media were allowed to be on hand at Academy Park due to school district coronavirus restrictions.

Brooks’ short scoring scamper with 2:19 left in the third quarter put the Patriots in front.

Tahriq Marrero caught a TD pass from Anthony Rodriguez with 2:44 left, but the Knights missed the extra-point attempt.

Christian Suber had an excellent game at defensive end for the Patriots.

Chichester 27, Father Judge 19 >> Zach Taylor threw two touchdown passes and Staring Reeves returned an interception to the end zone in the fourth quarter to lead the Eagles to the Friday night win.

Taylor had scoring connections with Ramir McDowell and Zaquan Burton. Bryen Hamm ran for a touchdown.