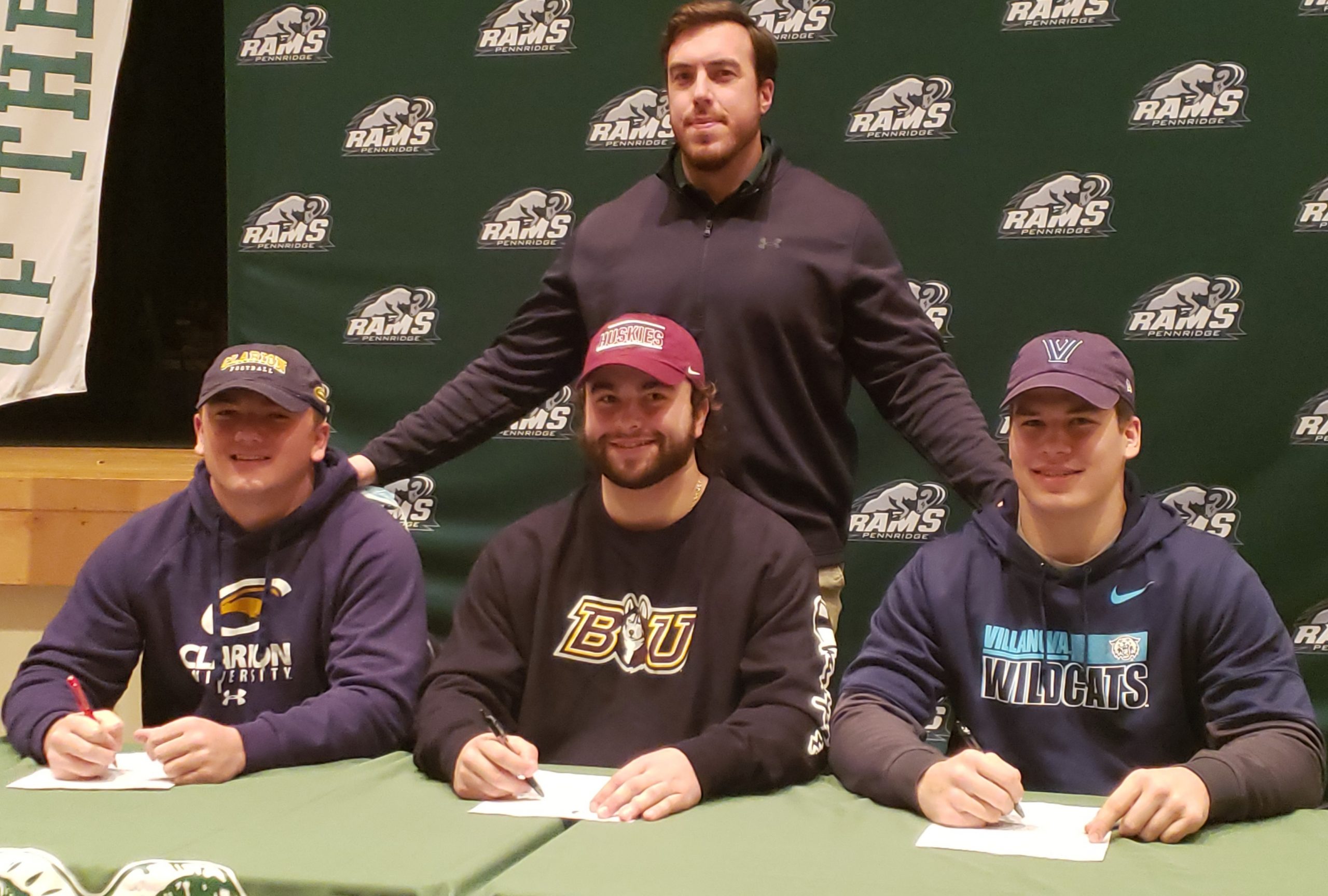 EAST ROCKHILL >> When Shane Hartzell, Jake Tarburton and Jack Ferguson are side-by-side, it typically means trouble is coming for anyone in their way.

Wednesday, however, the trio were all smiles. They were among 13 seniors signing their National Letters of Intent at Pennridge High School.

The three football players all earned Reporter/Times Herald/Montgomery Media First Team All-Area honors in the fall. Hartzell was recognized for his play at linebacker while Tarburton and Ferguson received top billing on the defensive line.

“Great day today,” Pennridge football coach Cody Muller said. “Seeing three great kids, three great leaders and football players take their ability and their talent to the next level and taking advantage of the opportunities, which is awesome.”

Hartzell, who was named the All-Area Player of the Year, will be attending Villanova. He committed last summer after missing most of his junior season with an ankle injury.

“(Villanova) is a great balance of academics and athletics,” Hartzell said. “The area, the atmosphere they have going on there, the team – it’s everything I wanted in a college.”

Tarburton decided a few weeks ago that he will be taking his talents to Clarion. He has family around the school and the coaches and atmosphere around the program made it his top choice.

Ferguson also made his decision in recent weeks and is going to Bloomsburg.

“(Bloomsburg) was a school I could see myself if I wasn’t playing football I would still want to be there and go to school there,” Ferguson said. “That was the main thing – it felt like home in a way and the culture there.”

The three friends, who have been playing football together since they were eight years old on the Green Jackets pop warner team, were all relieved to put pen to paper and officially lock in their college decisions.They are leaving the program after one of the best seasons in Pennridge history. The 2020 Rams went 7-1 and reached the District 1-6A championship game.

“They’ve been big for us the last three years,” Muller said. “Just building the culture and establishing what we want to do year-in, year-out. It started with a lot of these guys that you see here today as well as the rest of the senior class. To see these three go on to be able to play at the next level and take the opportunity – they’re going to three great colleges and those teams are getting three great football players.”

“We have a lot to celebrate this year,” Pennridge Athletic Director David Babb said, “a lot of outstanding teams, outstanding athletes and a lot of big changes are coming. It’s an exciting day and it’s also a sad day because a lot of our athletes are leaving and we wish you guys were here for another year or so, but you’re moving on to bigger and better things.”