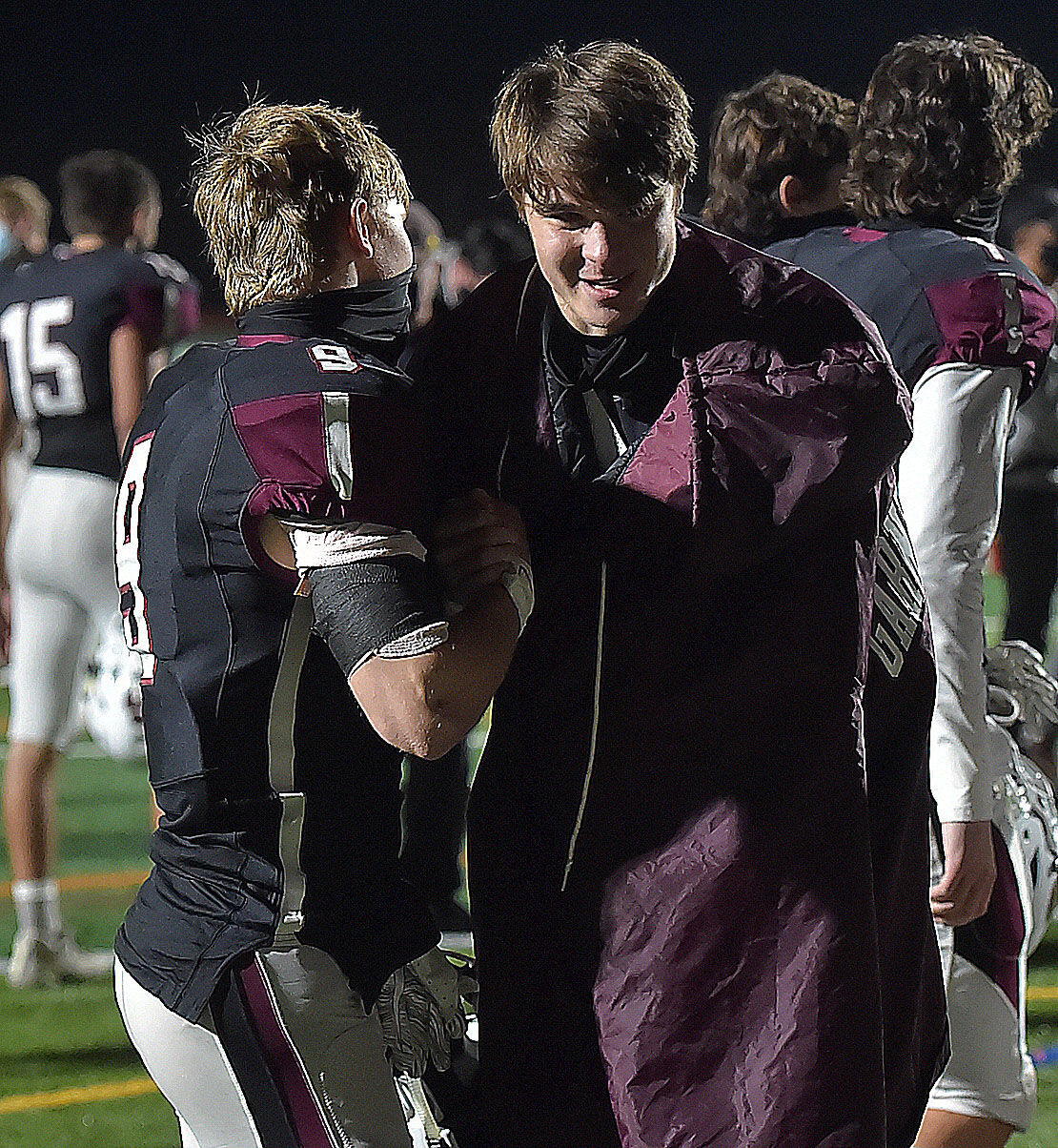 Kevin McGarrey can imagine worse ways to end his high school career. He went out scoring the biggest touchdown of Garnet Valley’s season.

The play was a quarterback keeper, and the senior was off and running, a 60-yard jaunt to the end zone. It happened in the biggest game of his life — the Central League championship in November — and his objective at the time was to provide a much-needed spark for his GV mates. McGarrey’s incredible scoring scamper snapped the Jags out of an early malaise against Marple Newtown.

The sheer joy of McGarrey’s dash ended in misfortune when he was tackled in the end zone, incurring a serious shoulder injury along the way. It ended McGarrey’s night.

The bright side? Garnet Valley rallied from a two-touchdown deficit, thanks to the light provided by McGarrey’s touchdown, as the Jags went on to rout the Tigers, 52-30. McGarrey was able to watch the remainder of the game on the sideline, shoulder in a sling, and witness the Jags put the finishing touches on a 6-0 season.

Weeks later, upon reflection on the play that effectively ended his playing career, McGarrey offered a positive outlook.

Indeed, he will take his football play with him for the rest of his life.

“It’s something that I won’t forget,” he said.

Haverford running back Jimmy Wright runs past Ridley defenders Friday night in a 33-3 win for the Fords. (Submitted Photo/Paul Bogosian)

McGarrey was one of the Jags’ MVPs and senior captains. It’s rare to see any Garnet Valley quarterback rank among the Delaware County leaders in passing, but McGarrey was an exception to the rule. He threw for 509 yards, good for seventh in Delco, and seven TDs. He also ran for 185 yards and three scores.

A case could be made that McGarrey was the most valuable QB in the Central League, even though he was voted second team by coaches and Conestoga’s (1-4) Michael Costigan was selected to the first team.

“Right when (the injury) happened, even before I knew I was hurt, I knew at that moment the entire team was going to be hyped up,” McGarrey said. “The energy absolutely skyrocketed when that happened and I knew they were going to get the job done for me.

“We were down 14-0 at the time, and I knew we had to score. On that particular play nothing really snapped in my head. I knew if I didn’t score somebody else on the team would, because everyone is capable of doing something great.”

GV scored the next four touchdowns and had seized control at halftime. McGarrey watched with pride as junior Max Busenkell stepped in his place at quarterback and completed 8 of 9 passes for 167 yards and two TDs. Busenkell had never played quarterback on varsity prior to that night.

“He was amazing,” McGarrey said. “I knew he would come in and lead us.”

The All-Central League football team, voted on by the league’s head coaches, was announced last week.

The strong Garnet Valley contingent included Reynolds (running back), Gallagher (wide receiver), Sam DiTrolio (center), Zach Libertore (kicker), Alex Nicolaides (linebacker), Will Wrzesniewski (linebacker) and CJ Wood (defensive back), who were chosen to the Class 6A first team. The Jags were far and away the best team in the league, outscoring the opposition, 291-56.

Other Class 6A first-team honorees included:

Mario Tascione and Jimmy Wright of Haverford (4-2) were voted for their efforts on offense and defense. Tascione, a two-way lineman, and running back/defensive back Jimmy Wright helped the Fords placed fourth in the league. Wright finished second in Delco in rushing with 797 yards and 11 TDs. Chris Dempsey (tight end), Casey Gilroy (wide receiver) and All-Delco Will Higson (linebacker) made first team, as well.

Nate Desmond (offensive line/linebacker) was Ridley’s top performer on both sides of the ball. The Green Raiders (3-3), who claimed sixth place in the league, also were buoyed by first teamers Blaise Harris (defensive line) and Jack Wills (defensive back).

For the first time the All-Central League teams were separated by Class 6A and Class 5A, with coaches from each classification choosing a first and second team as well as honorable mentions.

The future is bright at Penncrest (2-4). The Lions ended the season on a high note with an upset win at Upper Darby. Connor McCarney and Nick Chelo were voted first-team offensive line and defensive back, respectively.

Seth Fliszar (tight end) and Matt Krebs (defensive back) of Harriton (0-5) also were selected to the first team.

The Reporter/Times Herald/Montgomery area standouts earn spots on 5A, 6A All-State Teams
Haverford High’s Will Higson is Main Line Boys Athlete of the Week