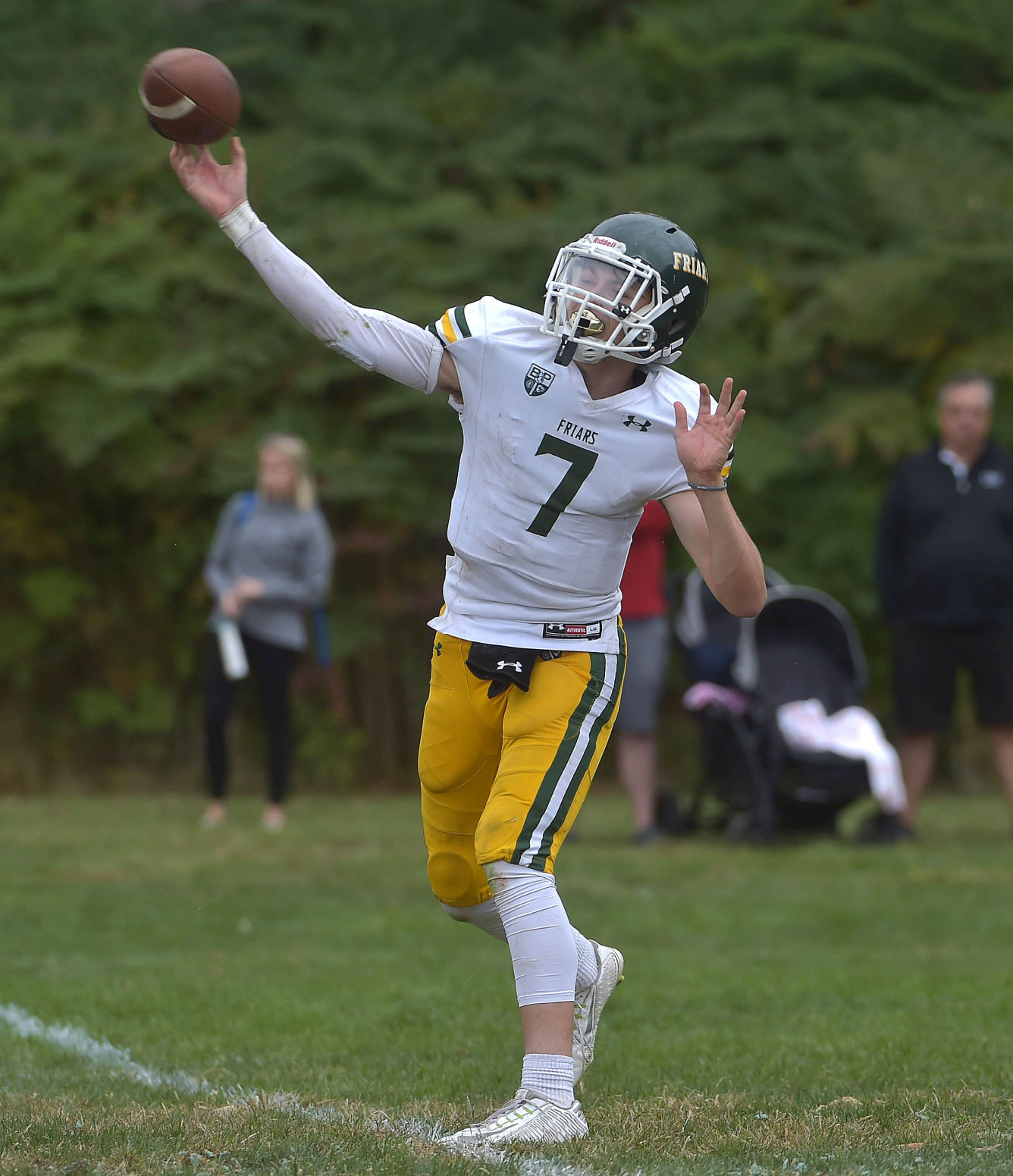 UPPER DARBY — The hope, back when the 2020 season started, was for Bonner-Prendergast to play a football game this week. The fear, about a month ago, was that the Friars’ time as a team would end not on the field but in a meeting in the school’s gym, not at the hands of an opponent but by a positive COVID-19 test for a player.

Lansdowne Avenue on Wednesday night was a far cry from HersheyPark Stadium. But as consolation prizes go, a victory over the reigning PIAA Class 5A champion isn’t a bad one.

Bonner-Prendergast wrote their own ending, using four touchdown passes from Kyle Lazer and three turnovers from an aggressive defense to top Archbishop Wood, 38-25.

It’s not the PIAA Class 4A final that the Friars dreamt of playing in, an aspiration that vanished with a positive COVID-19 test just after Halloween and another the following week to delay the restart. Bonner-Prendie (4-0) was supposed to be back on the field last Friday against Archbishop Carroll, until the Patriots – who won a states game in Class 3A as Neumann-Goretti’s COVID replacement – had to end their season early with a positive test.

Archbishop Wood was the backstop to all this, the last schedule contingency for a talented Bonner team to get one last game. Playing like it was their state final, the Friars made the most of it.

“It’s been really stressful after we couldn’t play in our first state playoff game,” senior Ayden Garnes said. “That just blew everything out for us. We wanted to bring a state championship back to this school, and we didn’t get to do that. That was a big blow for us as a team. But we came back last week and this week and knew this was our state playoff game. We showed them everything we’ve got and came out with the win today.”

The victory is the first in program history over Wood, according to the archives on tedsilary.com, a matchup history that encompasses 10 meetings since 1991. It came in the apotheosis of what this Bonner team can be: Playmakers on offense, defense and special teams, all firing in unison.

There was Lazer, the quarterback handed the reins to the offense midway through his sophomore season and given the chance to grow, capping his career by going 12-for-19 for 225 yards and four touchdowns. There was Garnes, who caught two touchdowns and nabbed an interception near the goal-line on a half-back pass by Cardel Pigford. There was Mason Peterson, who not only ran 17 times for 110 yards but had a momentum-shifting 97-yard kick return late in the first half to put Bonner up for good.

Collectively, it was the best version of the team that coach Jack Muldoon envisioned in the preseason.

Garnes and Lazer’s first scoring hookup came in the second quarter, Garnes beating his defender and leaping to haul in a 24-yarder in the corner of the end zone before the safety converged. Then, Lazer recovered a botched snap on the first drive of the second half, found his feet and threw the ball up for grabs. Garnes obliged, outjumping a defensive back, then shaking another for a 44-yard score.

“I’m going to keep backing up, and I know I can go up top on a lot of kids,” said Garnes, who caught seven passes for 149 yards. “So he threw the ball, and I did what I do, just go up and go get it and get in the end zone.”

“Between him and just any other weapon, I know if I have some pressure on me, just throw it up to them,” Lazer said. “They’re going to make a play for you. He’s just one of the best dudes out here, and I just have to give him a chance. It’s sad we only had four games out here, but I think we made the most of it.”

Lazer hit James Welde on an 11-yard score, a jump ball that the 6-6 Welde won along the sideline in the end zone with 10:16 to play. Lazer sealed it by hitting Ibrahima Diallo across the middle on a five-yard score with 5:06 left.

Wood’s hopes took a massive hit at 1:42 of the third when Kaelin Costello was injured. The workhorse back had 22 carries for 135 yards and was the main source of the Vikings’ offense.

The affect wasn’t immediate, though. Quarterback Max Keller, who missed a series earlier when his helmet flew off on a massive Nasiim Rhodes-Nelson hit on the release of a throw intercepted by Daniel Johnson at the 12, used the next snap to connect with Ryan Woertz on a 54-yard go route for a touchdown. With 86 seconds left in the third, Wood was within 24-19.

“As everyone knows, Kael is a big part of this team,” Keller said. “Kael fights for every yard he gets, he’ll never give up and just to see a teammate, a brother, go down like that in his final game, it sucks but you have to keep fighting.”

The lead seesawed in the first half, thanks in part to Bonner bungling five of six point-after attempts. Rushing touchdowns from each side – Peterson from the six, Luke Cantwell the two – knotted the game at 6 one play into the second quarter. Wood took its only lead when Pigford snared a Keller pass with one hand from eight yards out with 1:24 left. But Peterson returned the ensuing kickoff 97 yards to the house, putting Bonner up 18-13. A Diallo pass breakup in the end zone as time expired on the half made sure the Friars took the edge into halftime.

Garnes extended it with his long touchdown. And while Keller found Pigford (five catches, 76 yards) for a five-yard score as time expired, Wood was picked off three times in the red zone, including by Derrick Jackson with two minutes to play to effectively seal the game.

It wasn’t the way the Friars had hoped the season would end. But in their de facto championship game, they made the most of it.

“It’s a second chance at something, and this was our state championship game,” Lazer said. “We came out here, executed a game plan, played our butts off and everyone was ready to go.”

“I feel like we really could’ve won the state championship,” Garnes said. “We had the players, we had the team, we had everything. And it got taken from us. And we put everything out here that we were supposed to show in the playoffs.”

Wood gets tricky with Pigford throwing but Garnes with the pick! Returns it 35 yards. Penalty on the return then deadball
Bonner ball at its 48 pic.twitter.com/XOPT3HbMwm