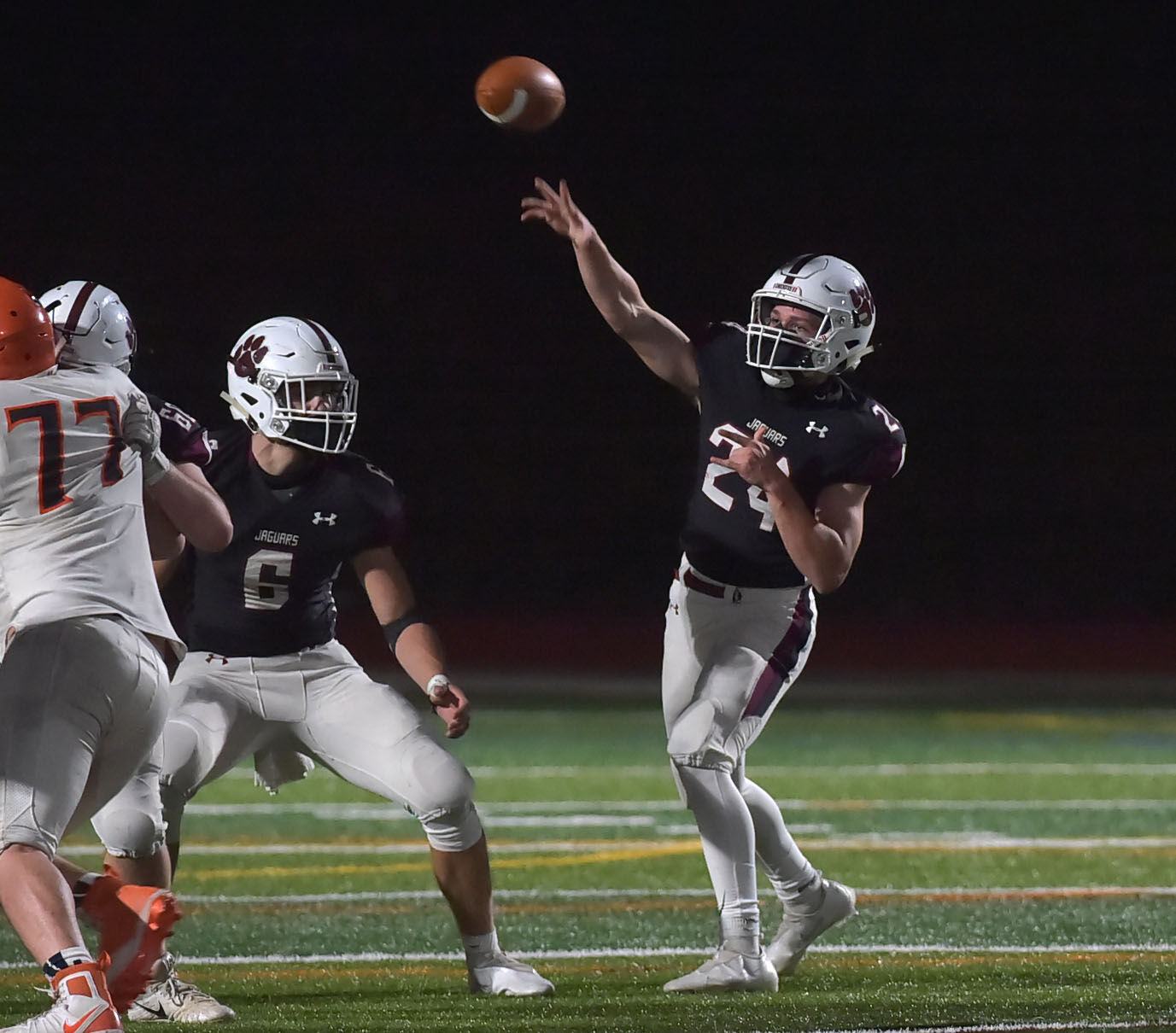 Garnet Valley's Max Busenkell stepped in as quarterback after Kevin McGarrey was injured in the first half and led Garnet Valley to a 52-30 win over Marple Newtown in the Central League final Wednesday. (Pete Bannan/MediaNews Group)

Later in the first quarter, when senior quarter Kevin McGarrey was injured in the end zone, tackled at the completion of a 60-yard scoring run, the Jags were fired up. McGarrey suffered a serious upper-body injury and did not return.

The quick strike by the Tigers and loss of McGarrey fueled Garnet Valley’s furious offensive explosion. Down by as many as 14 points, the Jags rallied to score the next four touchdowns. What appeared to be a competitive game turned into a laugher by the fourth quarter, with coach Mike Ricci’s team cruising to a 52-30 victory.

Garnet Valley quarterback Kevin McGarrey, right, is tackled as he crosses the goal line by Marple Newtown’s John Capello in the first half. McGarrey was injured on the play and didn’t return. (Pete Bannan/MediaNews Group)

Winners of 25 consecutive league games, the Jaguars completed the shortened season with a perfect 6-0 record.

Junior running backs Shane Reynolds and Sean Gallagher powered the offense after its slow start. Reynolds exploded for 142 yards and a touchdown on 27 carries, while Gallagher amassed 214 yards of total offense.

“Kev’s going to put his body on the line, no matter what, and he’s a big team guy,” Reynolds said. “It really lit a fire under us because I know whenever I’m back there on offense I can look to Kevin. I knew we were going to get this done for him. Seeing him upset after he got hurt, I think we really kicked it into another gear.”

Gallagher finished with 90 yards on the ground and five catches for 124 yards. He caught a pair of touchdown passes, including a 75-yarder on a quick slant in the third quarter. And for good measure, he threw a halfback pass to Matt Marowski for a five-yard TD in the final stanza.

“I knew after they scored their second touchdown (in the first quarter), I looked around and I saw a bunch of warriors on our team,” Gallagher said. “We weren’t fazed at all.”

After Shane Mulholland played a series as the back-up quarterback, Ricci called on junior Max Busenkell, one of the team’s standouts in the defensive secondary. Busenkell hadn’t played the position in a live setting since his freshman year, yet flourished when the Jaguars were desperate for someone to take control of the offense. He completed 8 of 9 passes for 167 yards and two touchdowns.

“At first I was a little nervous, but at the end of the day, I know the backup quarterbacks prepare like we’re ready to start,” Busenkell said. “Even though Kevin gets most of the reps in practice, we stay prepared. You know, something like this happened to us a few years ago when Ryan Gallagher had to step in as a sophomore, and it’s something you see with the backup quarterback time in and time out here.”

Busenkell didn’t want to let McGarrey down, either, and knew the responsibility of leading the offense fell on his shoulders. Ricci had the utmost confidence that he would do just fine under such immense pressure.

“Anytime something like that happens where your leader goes down, people rally around in support. The guys love Kevin,” Ricci said. “As one of our coaches said, what a hell of a play to go out on. … It was a big play, a play we needed to have happen, and he made it. And, yeah, you could see the whole team rise up to play for Kevin.

“This was Max’s first time I think he ever really played quarterback for any stretch of time on varsity. We’re fortunate that we have two guys in Shane Mulholland and Max Busenkell who can play the position, and we said all along that we have three varsity quarterbacks. Kevin did such a good job that we didn’t really use the others too much. Shane’s done a good job for us and Max came in tonight and did a great job. He really stepped up and played really well.”

The Jags were taken by surprise on the first play from scrimmage. Quarterback Joey Paoletti threw across the line of scrimmage to Brian Joslin lined out wide. Joslin reared back and connected with Michael Schumacher for a 64-yard touchdown. Paoletti’s one-yard keeper later in the first quarter extended Marple’s stunning early lead to 14-0.

McGarrey provided the spark the Jags needed on his final play of the game. He took an option and sprinted 60 yards, but was tracked down by a hustling John Cappello in the end zone. GV’s players, coaches and fans were livid at the officials for not calling a late hit on McGarrey, but in defense of Cappello, he was just trying to make a play.

“I don’t think it was anything intentional,” Ricci said. “It was just something that happened.”

Garnet Valley grabbed the lead in the second quarter on a Reynolds scoring scamper and two-point conversion run, making it 16-14 at halftime. Gallagher hauled in his first touchdown catch, and senior running back Brian Bradley scored from a yard out in the third to extend the Jags’ lead to 30-14.

Marple Newtown’s superb junior running back, Charlie Box, accounted for both of his team’s touchdowns in the second half. He broke several tackles to run 15 yards to the end zone, then caught a 25-yard pass from Paoletti with a minute to play. Box ran for 51 yards on seven carries and had six catches for 66 yards.

Will Wrzesniewski returned an interception 55 yards late in regulation for the Jaguars.

GV had its toughest game of the season against the Tigers (5-1). The Jags scored 291 points in six games (48.5 points per game) and produced 546 yards of total offense, including 358 on the ground, Wednesday evening.

Brian Bradley takes the pitch and dives over the pylon. 2pt play is good. @GarnetValleyFB in control 30-14 2:24 3Q #delcofootball pic.twitter.com/Ie3R1dORuC

For the seniors, they can forever say they were part of the wildest season in school history. Back in August, they were uncertain if they would have a senior season due to the coronavirus pandemic, but they pushed through it, stood together and went out as champions.

“The parents, the administration, the coaches … they fought for us each and every step of the way. And they got us out here,” senior lineman Brendan Henry said. “All of our thanks goes to them. We would not be out here, getting the Central League championship for a third year in a row without them giving us an opportunity to play.”

Garnet players celebrate as the last seconds tick away in their Central League Championship over Marple Newtown. (Pete Bannan/MediaNews Group)

Malvern Prep star Lonnie White is used to winning on the field, but his family will always be what he fights for most
In ‘our state championship game,’ Bonner-Prendergast goes out as winners