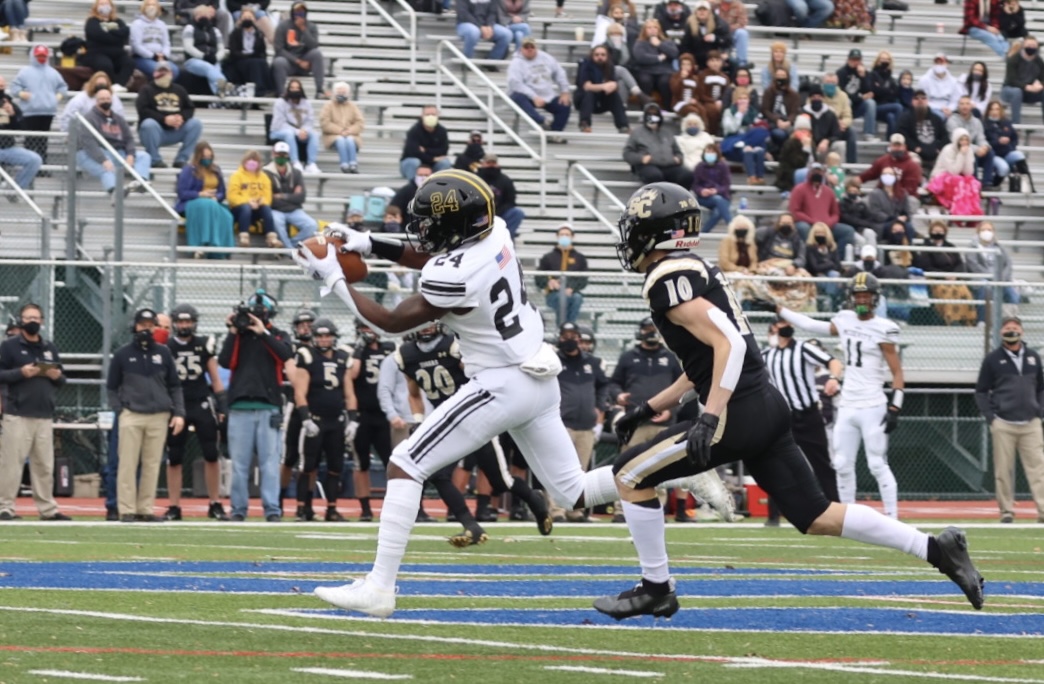 SELINSGROVE >> Bishop McDevitt scored on just the third play from scrimmage Saturday afternoon, but soon after, the wheels began to turn for powerful Southern Columbia.

The Tigers moved forward with a powerful ground game – with 198 yards produced by pile mover, Gavin Garcia – and pulled away to a 42-14 victory over the Royal Lancers at Selinsgrove High School.

Southern Columbia, going for its fourth consecutive state title in Class 2A, advances to next week’s final in Hershey.

“We saw some things that we wanted to attack and that’s how we jumped out,” McDevitt coach Mike Watkins said. “We struggled to execute after that so it was reaching for things to try to find a way. We shot ourselves in the foot with some penalties and field position became a problem. You can’t get one dimensional against a team like that.”

Bishop McDevitt celebrates after a fumble recovery in the second quarter against Southern Columbia during their PIAA-2A semifinal on Saturday, Nov. 21, 2020. (Geanine Jamison/For MediaNews Group)

Bishop McDevitt turned its first possession into a quick touchdown.

Isaac Khyrie caught a deflected pass for a gain of 28 to move the Royal Lancers in deep.

The Royal Lancers forced Southern Columbia to punt it away on its first series, but midway through the second quarter, Garcia took the handoff from quarterback Liam Klebon and was gone – 58 yards for a score and the Tigers pushed ahead 7-6.

A two-yard run by Braeden Wisloski later made it 14-6 Southern Columbia heading into the second quarter.

Garcia nearly duplicated his first touchdown run, this time going 52 yards for a score on a play in which he pushed through a group of defenders and broke free, making it 21-6 Tigers at the break. Garcia racked up 146 yards on nine carries in the first half.

The second half would belong almost entirely to Southern Columbia.

The Tigers padded their lead with touchdown runs by Garcia (34, four) and a 53-yard pass from Klebon to Wisloski. Garcia finished with four touchdowns on the day.

Corey Wright Downing on the carry for Bishop McDevitt against Southern Columbia during their PIAA-2A semifinal on Saturday, Nov. 22, 2020. (Geanine Jamison/For MediaNews Group)

With the running clock in the fourth quarter, McDevitt closed out the scoring with a five-yard run by Keon Kenner and a two-point pass from Santo to Mekhi Watson.

“We didn’t wanna quit. We didn’t quit all year,” Santo said. “We wanted to keep playing until the end and we did. It didn’t go our way today.

“We fought through a lot of adversity and distractions this year. It’s a big family here. We’re all brothers. And I’m just glad I was able to be involved.”

Said Watkins, who directed McDevitt to its first state semifinal appearance: “All this group has done all year is battle. They did everything we asked. We made our place in history. The school’s never been here. The community kind of rallied around us. I think we were able to capture the spirit of the McDevitt community and that’s something I’ll always remember.”