Mercury Week 8 Football Review: Highlighting the best from the 2020 season 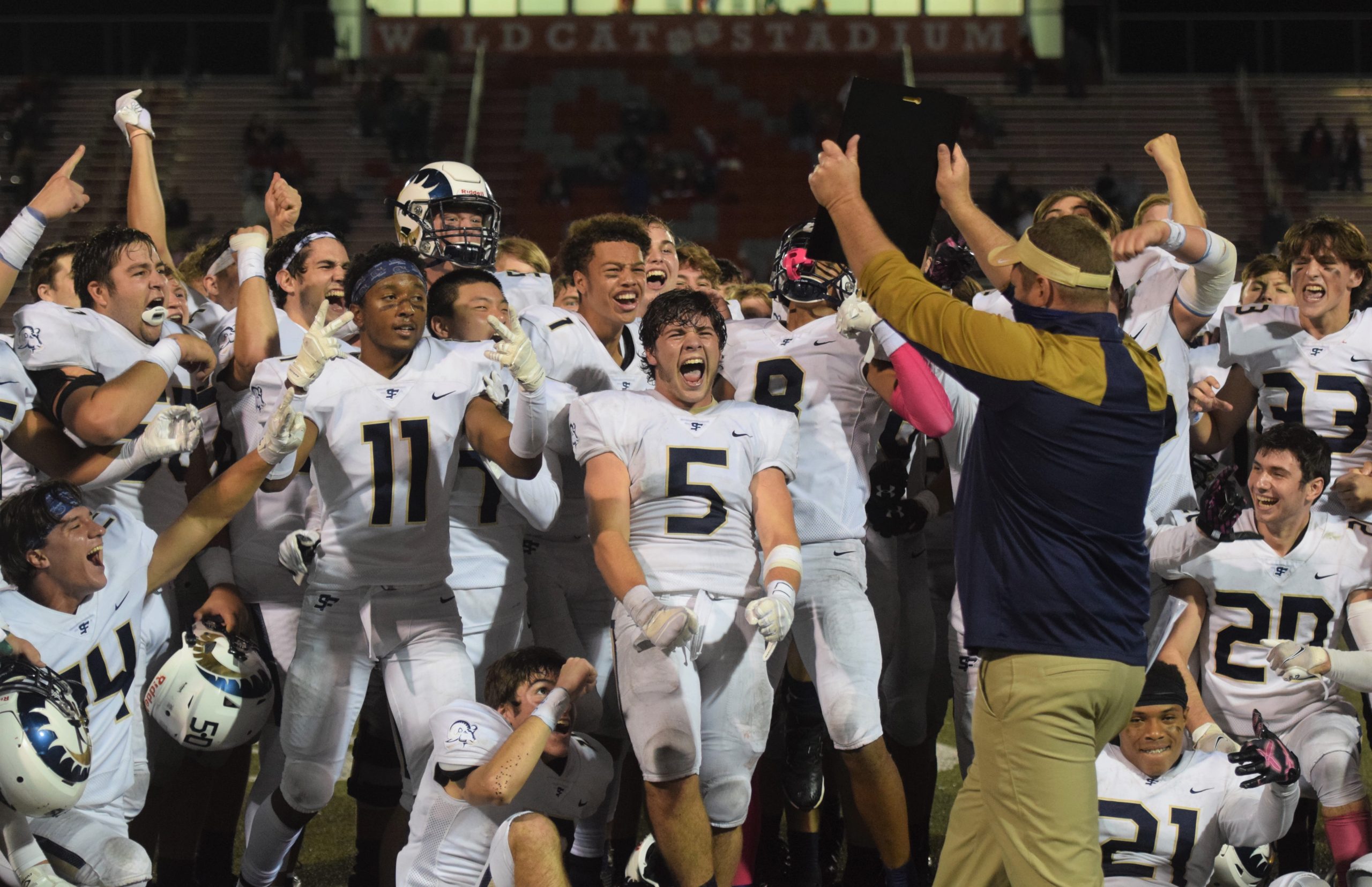 Unquestionably, the highlight of the 2020 high school football season was just that – the fact there was a season at all. Throughout October and November, we covered area football as we normally would, but it was clear that coaches, players, and fans alike were taking nothing for granted.

Postgame speeches, interviews, and other interactions were inundated with allusions to ‘every game could be our last’ or ‘grateful to be on the field.’ And in the end, there were postponements and some cancellations, but every team in the Mercury area took the field this fall for at least a few games. That’s the real story of the 2020 football season – a community rallying together to pull off a season the likes of which they hope they never have to repeat.

Now to the players, games, and people on the field.

Daniel Boone and Twin Valley set a high bar on the very first night of competition, with the Blazers taking a 43-42 victory in the final seconds of a seesaw contest. The winning points came via a variation on the “Philly Special” on a decisive two-point conversion. Quarterback Carter Speyerer handed to running back Cam Hirshman, who pitched to Krystian Hornberger for a potential end-around. Instead, Hornberger found an uncovered Speyerer in the left corner of the end zone, giving Boone a thrilling opening win.

The very next week, Methacton and Upper Perkiomen played a competitive, nip-and-tuck game for about 47 minutes and 30 seconds before an explosion of big plays led to a fantastic finish. Mike Merola found Justin Gumienny in the end zone to give the Warriors their first lead with 35 seconds to play, a margin that grew to 18-12 following a two-point conversion. Upper Perkiomen quickly moved into Methacton territory, where a roughing-the-passer penalty gave the Indians one untimed down from the Warriors’ 26. Quarterback Hunter Flack found Logan Simmon across the middle, with only Methacton’s Jude Wozniak between Simmon and the end zone. When the dust settled, it was Wozniak who saved the opener for the Warriors at about the three-yard line, giving Methacton a 1-0 record and ultimately sending the squad onto their best record in six years.

After a first half that looked like the same old story, Spring-Ford turned their District playoff game with Souderton into a fourth quarter nail biter with big plays in all three facets of the game. Trailing 20-3 in the early fourth quarter, the Rams’ Nasir Cooke stripped Souderton’s Evan Kutzler, with Josh Hellauer falling on the fumble in the end zone to cut the Indians’ lead to 10. On their next possession, Ryan Freed found a wide-open Zach Zollers down the middle for a 45-yard score with about seven minutes to play. Souderton responded with a commanding touchdown drive, but sophomore Gage Swanger returned the ensuing kickoff 91 yards to narrow the deficit again to 27-24.

Unfortunately for Spring-Ford, that was where it would end, as eventual District 1 champion Souderton prevailed. It was little consolation to the Rams that they provided Souderton with their toughest matchup of the season – and the most exciting fourth quarter of high school football this season.

Perkiomen Valley’s Ethan Kohler had a few games that could’ve made this list, but we’ll go with week two’s showing, featuring 19-of-22 passing, 212 yards, and four touchdowns through the air as the Vikings downed Upper Perkiomen for their first win of the season.

Upper Merion freshman Jalen Alexander pounded his way to a 261-yard, three-touchdown night in a victory over Phoenixville on Nov. 7.

Upper Perkiomen’s offensive breakout against Owen J. Roberts in week four was led by junior Logan Simmon, who carried 17 times for 222 yards and a pair of scores. The running back added a 27-yard reception as the Indians claimed their first win of the season, 31-14.

In that same contest, OJR’s Dante DeNardo racked up 13 receptions for 147 yards and a score.

Boyertown’s Zach Davis had to wait until week six to make his debut, but he showed everyone what they’d been missing with 11 tackles, 1.5 sacks a forced fumble in the Bears’ 33-6 win over Pottstown.

True, the Golden Panthers of Pope John Paul II only got to play three games this season due to delays, postponements, and cancellations. But they made the best of those games, topping Conwell Egan of the Philadelphia Catholic League before thrashing traditional division rival Upper Merion and toppling 6A Perkiomen Valley. For a team coming off a 2019 District One Class 3A championship, the year’s squad made their own mark by garnering the school’s first-ever win against a 6A opponent. The Golden Panthers didn’t qualify for Districts in their new 4A classification due to their number of games played, but you’d be hard-pressed to find anyone unwilling to consider them in the conversation for the best 4A team in the area.

Pressed into service just days before the start of the season, Owen J. Roberts’ Michael Reed showed sustained improvement at quarterback throughout his sophomore campaign. Completing 57 percent of his passes and compiling three touchdowns through the air, Reed gained valuable experience and gave coach Rich Kolka that between himself and classmate Will Whitlock, the Wildcats will be strong behind center for the next couple years.

Perkiomen Valley split their backfield duties primarily among three players, two of whom were sophomores Rasheem Grayson and Leo Hunsberger, who showed diverse skill sets in the Vikings’ 6-2 season. The two backs head a loaded sophomore class that hopes to help catapult the Vikings back atop the PAC in 2021.

Boyertown got freshman Ryder Gehris’ first two career starts under his belt in wins over Pottstown and Pottsgrove at the end of the season.

Pope John Paul II’s signature victory at Perkiomen Valley was covered earlier but merits repeating. Coach Rory Graver talked before the game about his desire to see the Golden Panthers move into the upper echelon of area programs, and the importance of being able to compete with 6A schools in order to accomplish that goal. The 34-22 win certainly accomplished those goals and more.

You could forgive Upper Perkiomen and coach Tom Hontz for feeling a little overwhelmed when various delays saw them brought into a round-robin with five 6A schools for the PAC season. The Indians persevered, however, finishing with a 2-3 record and coming three yards away from another victory in the aforementioned opener with Methacton.

Phoenixville arguably navigated more twists and turns on their journey back to the playing field this season than any school, but the journey was validated as the Phantoms claimed victories over Upper Perkiomen and traditional rivals Pottstown. Interim coach Anthony Ciarlello made the most of limited preparation time to have the Phantoms competitive each time they took the field, ending with a more-than-respectable .500 record.

Methacton punctuated their first winning season since 2014 with back-to-back wins over Pottsgrove and Council Rock South at the end of the campaign. Justin Carfrey emerged into one of the area’s top running backs, while the stout Warriors’ defense played up to their considerable potential, surrendering only a single touchdown between the final two contests.

Spring-Ford’s defense was the story of the PAC season, not allowing a single point in the first half and racking up three consecutive shutouts in the middle of their schedule. Choosing a single standout from the group was difficult, but Naphtali Stine led the area in interceptions (four) while Ryan Horvath’s 38 tackles (10 for loss) would likely be among the leaders – if not the top mark – in that category. Even in the season-ending loss to District champion Souderton, the Rams overcame some early struggles and held the Big Red to 231 total yards for the contest.

When Pottsgrove opened their season with Senior Night against Upper Merion, it was strange to hear the announcement that senior kicker/punter Luke Kaiser was not in attendance. A three-year member of the Falcons football team, Kaiser had emerged as the area’s premier two-way kicking threat over his career.

It soon became clear, however, when Kaiser emerged in the late third quarter. Turns out he’d been at Upper Perkiomen, playing goalie and claiming his fourth shutout of the season in a 1-0 Pottsgrove win on the soccer field. He returned in time to lift a booming kickoff that Upper Merion couldn’t corral, setting the Falcons offense up deep in Upper Merion’s territory for what would become the clinching score in a 20-7 victory. It certainly explained his earlier absence.

“That was a really hard decision,” Kaiser admitted. “Coach (Bill) Hawthorne talked to me at practice and told me I should go to soccer. But it’s really hard to leave any team, and I promised my (football) team I’d be back as soon as I could.”

In a perfect encapsulation of the 2020 season, Kaiser kept his word, did his part and contributed to a team effort.

Reporter/Times Herald Football Notes: Early drive sets tone for Souderton in District 1-6A final
HECKENBERGER: COVID is story of season, but it’s the players who will redefine 2020 in our memories