Phoenixville hangs on against resilient Pottstown for 20-13 win 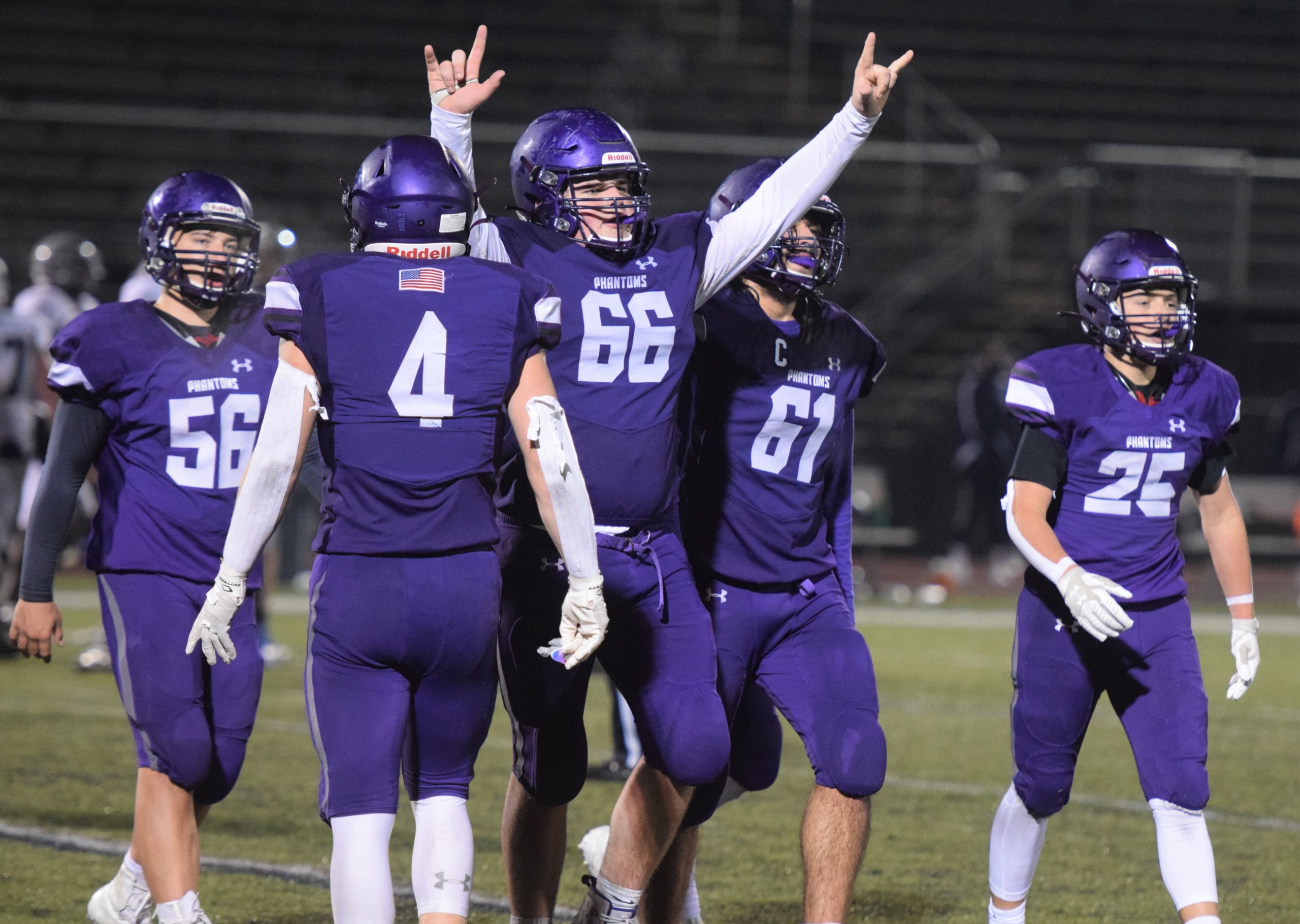 Just 32 yards separated Pottstown from a chance at its first victory of the 2020 season.

The marquee moment of Friday night’s matchup between Pottstown and host Phoenixville wasn’t measured in seconds or yards though.

It was a single play, when Phantoms’ junior Lucas Dimaio intercepted a pass to seal a 20-13 Phoenixville win in the final game of the season for both teams.

Junior Owen Koch ran for 154 yards and three touchdowns, and the Phantoms’ defense held Pottstown to 152 yards of offense in the victory, which gave Phoenixville (2-2) its first .500 or better mark since 2012.

“For us to get a pick and to knee it down and take this ‘W,’ especially on my last time on this field, it means everything to me,” Phoenixville senior Kris Grinstead said. “It means a lot, especially for years to come because now guys have a standard. We’re not the losing team. We’re the team that went .500 this year. Now next year, what can we do?”

Phoenixville’s Kris Grinstead tries to get away from Pottstown’s Rashean Bostic after a reception. (Austin Hertzog – MediaNews Group)

Heading into Friday’s game Pottstown (0-4) had just 28 active players and things got worse Friday with sophomore running back Joneil Oister (14 carries, 74 yards) going down with an injury in the second quarter and starting quarterback Mason Miller getting hurt midway through the third quarter. Oister also served as the team’s backup QB.

Pottstown senior defensive back/wide receiver Jahzeel Watson hadn’t played quarterback prior to Friday night, however, he found himself under center for the last 22 minutes and nearly led the Trojans to a comeback win in his final game.

With 6:28 left in the fourth quarter, Watson capped a 13-play, 64-yard drive with a 16-yard touchdown pass to Rashean Bostic to make it a 20-13 ball game. Watson and the Trojans’ D forced a three-and-out before turning the ball over on downs with 3:01 to play. Pottstown’s defense rallied once again forcing a Phantoms punt with a little more than a minute left.

Bostic returned the short punt 56 yards to Phoenixville’s 32-yard line to give the Trojans a chance with 55 seconds left before Dimaio’s pick on the very next play.

Sophomore Jared Hewitt ran 19 times for 68 yards and a touchdown in Oister’s absence, while Watson chipped in 35 yards on six carries in addition to completing two of his three passes.

Despite being unable to complete the comeback, Watson was pleased with the Trojans bringing the fight to Phoenixville.

“It was very important,” Watson said of the Trjoans’ strong finish. “The first three games weren’t so good, so we knew we had to come out here and knew it was going to be a good game.”

Coming off a lopsided loss last Friday against Upper Merion, Phoenixville jumped out to a 14-0 lead early in the second quarter on two touchdown runs by Koch.

After a Pottstown fumble gave the Phantoms good field position, Koch ran in from four yards out on Phoenixville’s second offensive play of the game. Following an interception from Ali Green, Koch added an 18-yard touchdown run to put Phoenixville ahead 14-0 with 10:18 to play in the quarter.

Phoenixville up 21-7 with 7:35 left in Q3. … Owen Koch shakes one defender and carries another with him into end zone on 13-yard TD run. pic.twitter.com/FL5Qdso09E

Hewitt cut the Phantoms’ lead to 14-7 before halftime with a four-yard second-quarter score, but Koch pushed the Phantoms’ lead to 20-7 with 7:35 left in the third quarter on a rumbling 13-yard touchdown run that saw him shake off one defender and carry another with him into the end zone.

The junior combined for 301 yards and four touchdowns in the Phantoms’ final two games, averaging more than 7.5 yards per carry.

“We just wanted to come out and fight, send the seniors out on a good note,” Koch said. “Just try to win this game and really come out here and finish. Coach’s message this whole week was to finish the game and finish plays.”

“Personally, the last couple games were pretty fun,” he added. “When you score like that and when your team’s doing good and you’re getting into the end zone, it’s always fun.”

Pottstown’s defense contained Koch to 44 yards on 11 carries in the second half to keep the Phantoms from pulling away. Sophomore Chris Chhern had an interception.

After being outscored by multiple scores in their first three games, Friday’s effort was a welcome sight for a Pottstown team that departs only three seniors (Watson, Strimpel and Raymond Boone) from its senior class.

“Even though we didn’t win, I’m excited about the way we played,” Pottstown coach Jeff Delaney said. “It gave us a good momentum boost going into the future because it’s in our hands. If we’re full strength, this is a totally different thing. But they could have folded, and they didn’t. They went up early and we didn’t fold. We responded. … We played the full four quarters.”

Pottstown cuts deficit to 14-7 with 3:07 left in Q2 … Jared Hewitt punches one in from four yards out. pic.twitter.com/whSYIDw8ou

Phoenixville and Pottstown both started their seasons Oct. 23 and were able to play for four consecutive weeks without any cancellations.

Though both teams were banged up with injuries and certainly had plays they would have liked to have back this season, getting to and through Friday night’s season capper was a success in itself for both squads.

“This season was really different,” Koch said. “A lot of it was very last minute, and a lot of it was thrown together last minute too. But we hung in there. We played good, and we ended up with a .500 record, and I think that’s the best thing we’ve had here in a couple years.”

“This season means a lot, especially this being my senior year it means so much,” Watson said. “The fact that we got to play in the first place is a blessing. During the summer nobody even expected that we were gonna play. The fact that we even got to come out here and play these four games has been amazing.”

NOTES >> Phantoms’ freshman quarterback Ty Romance completed 4-of-7 passes for 55 yards, including a 35-yard strike to Ahmid Spivey. Grinstead and senior Dylan New also caught passes … Adam Green booted the Trojans’ first extra point of the season, while back Jack Kelly made two PATs for Phoenixville. … The two teams combined to fumble the ball 12 times with change of possession occurring on four of those plays.