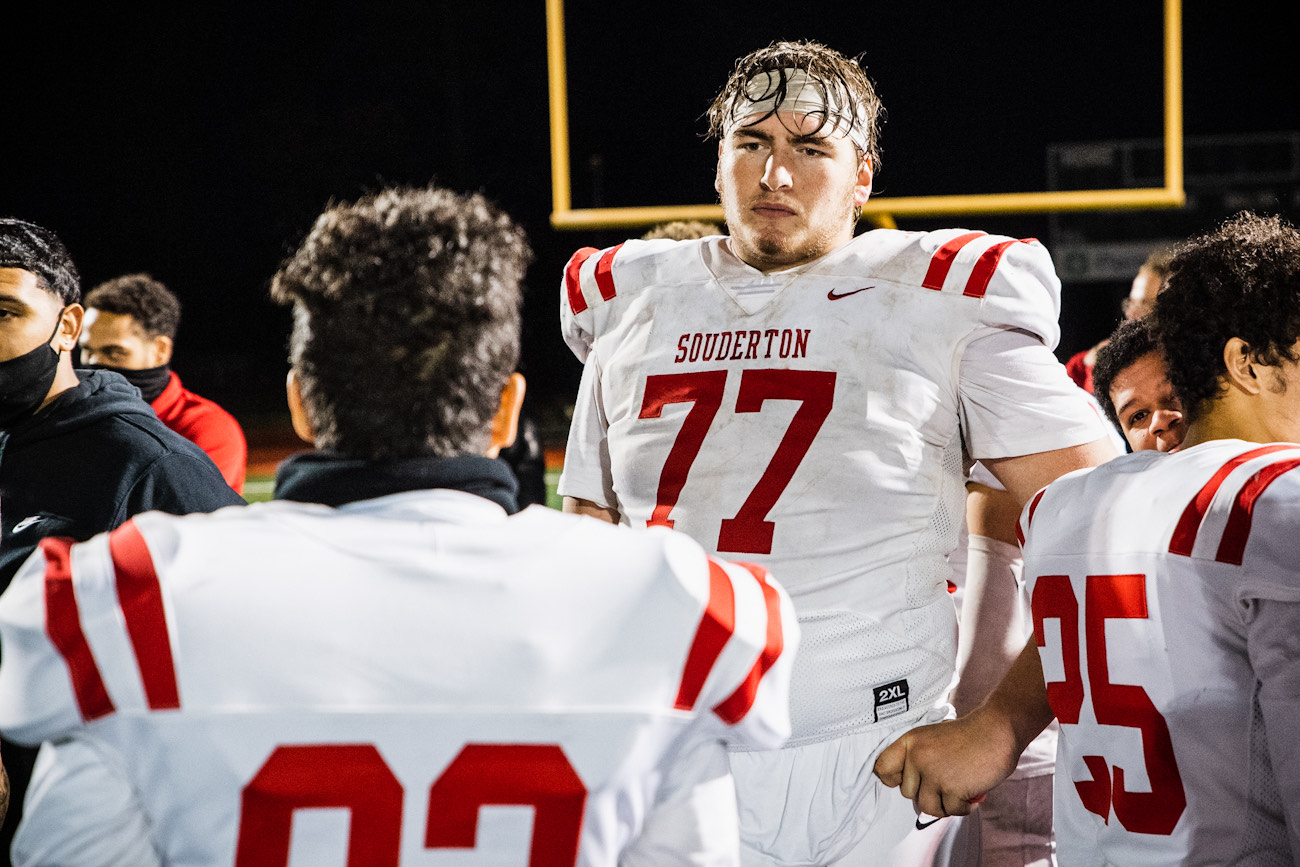 Ben Murawski (77) and the Souderton offensive line helped lead the Indians to a 31-17 win over Pennridge in the District 1-6A final on Friday, Nov. 13, 2020. (James Beaver/For MediaNews Group)

EAST ROCKHILL >> At 6-foot-6 and 342 pounds, Souderton Area’s Ben Murawski is hard to miss on a football field, and certainly difficult to get past.

Murawski was at the heart of Souderton success Friday night, a key part of an offensive line that paved a nice, smooth pathway to the district trophy.

Souderton’s big men have been pushing in the right direction all season, and Murawski — the Indians’ biggest man — is a prime example.

The first flicker of the scoreboard was evidence of that, as Jalen White found an alley and bolted into the end zone to give Souderton a lead it never relinquished in this District 1-6A Final with rival Pennridge.

Souderton’s Jalen White (7) breaks into the open for a long touchdown run that put the Indians up 14-3 in the District 1-6A championship game against Pennridge on Friday, Nov. 13, 2020. (James Beaver/For MediaNews Group)

White was in the end zone again in the second quarter and Souderton (7-0) was off and running.

Murawski grew up playing football but then took a break to transition to basketball.

His build and height brought him back to the gridiron, and he came out for football his freshman year at Souderton.

He took a year off his sophomore year but got back to it as a junior. He feels at home in the trenches.

“Up front, we like to say ‘get everybody involved,'” the senior said. “So we run each side about 50-50. It’s a blast having everybody on the o-line.

“We came a long way from COVID and we all pushed through it. We lost a couple guys this week due to quarantine but we all stuck through it and we played a great game, against a great football team.”

The holes were there for White and the backs and quarterback Evan Kutzler had an uncluttered pocket.

“We struggled the first week of the season and then gradually picked it up each week,” Murawski said. “This game, we were doing super well. We did really well this game. We blocked everybody, had the right assignments.”

The Souderton Indians celebrate after winning the District 1-6A championship game over Pennridge on Friday, Nov. 13, 2020. (James Beaver/For MediaNews Group)

Murawski plays both ways for Big Red, occupying a big spot on both lines. It’s not easy, but he seems up to the task.

“It’s a lot for a big man like me, a lot of conditioning that goes into it,” he says with a smile. “But it’s so much fun playing football. And I’m gonna continue playing in college as well.”

No. 77 and the rest of the seniors are finishing out in style. Under Gallagher’s guidance, the Indians captured the program’s first ever district crown.

“It was really special. Last year was an 8-3 season and this year, we are doing so well with everybody coming back and contributing,” Murawski said. “Our running backs, offensive line, quarterback – we’re all set.”

Big Red’s next obstacle is a big one, St. Joe’s Prep. But maybe anything is possible with players like Murawski clearing the way.

“St. Joe’s Prep…I can’t wait to go up against those guys,” he said.

Sun Valley loses yet another game due to COVID exposure
GEOGHEGAN: In a year to forget, Rustin has season to remember