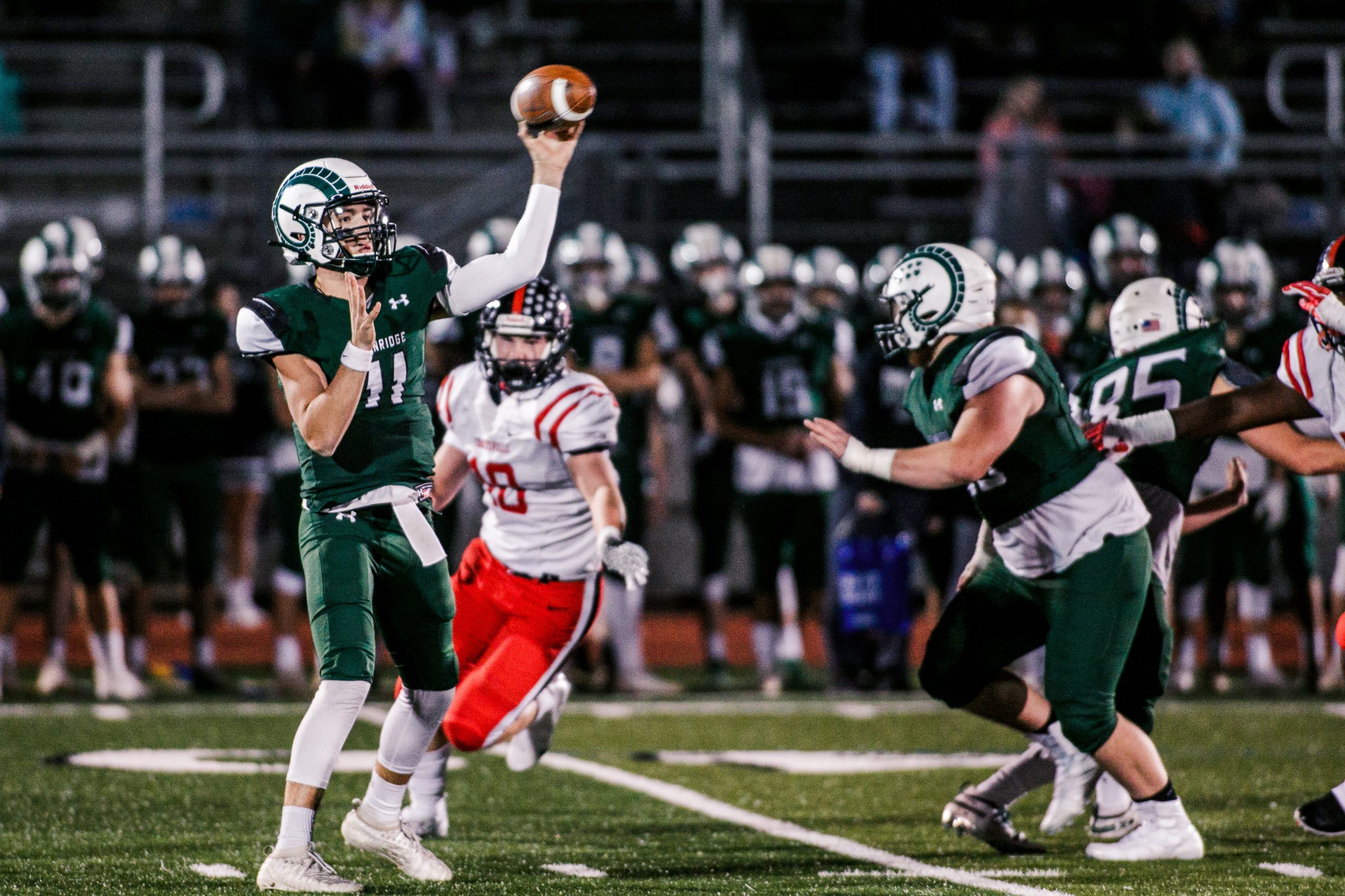 It has come down to two old rivals and many familiar faces, as Pennridge takes on Souderton in the District 1-6A Final Friday night at Helman Field.

The two teams, traveling parallel paths all season, come into the game a perfect 6-0. Top-seeded Pennridge earned a 36-33 win over No. 4 Coatesville last week while No. 3 Souderton prevailed 27-24 over No. 2 Spring-Ford.

The winner of this contest advances to next week’s state semifinals, to take on St. Joe’s Prep.

The ties run deep in this one, as Pennridge coach Cody Muller is a former player of Souderton coach Ed Gallagher.

“He and I have been talking about that for months,” Muller said. “We’ve been saying that we’ll see each other in the playoffs.

“Not to be cocky or too confident, we’ve been looking forward to this rematch for a while on both sides.”

Quarterback Evan Kutzler completed a big 22-yard pass to Sean McGoldrick on a clinching touchdown drive last week for Big Red, sending them to the big one against the Rams.

District 1-6A Final: (3) Souderton at (1) Pennridge
Day/place: Friday, 7 p.m., at Helman Field, Pennridge.
On Twitter: @mpcabrey; @khunter10.
Livestream: PennridgeTV (https://youtu.be/nussWqkeRVo).
Records: Pennridge comes into this a perfect 6-0 with a 5-0 record in the Suburban One League National Conference. Souderton is also 6-0 and 5-0 in the SOL Continental.
Up Next: The winner advances to the state semifinals next week to take on St. Joe’s Prep.
Last Week: Souderton got past Spring-Ford, 27-24 while Pennridge beat Coatesville, 36-33.
Players to Watch: Quarterback Evan Kutzler came through in the clutch last week for Big Red. Jack Ferguson showed his breakaway speed in the ground game last week for the Rams.
Prediction: Souderton 28, Pennridge 27.

District 1-5A Final: (2) West Chester Rustin at (1) Upper Dublin
Day/Place: Friday, 7 p.m., at Upper Dublin.
On Twitter: @ADRobinson3; @emor09.
Records: Upper Dublin is 5-1 overall and 3-1 in the SOL Continental. Rustin is 4-1 overall and 2-1 in the Ches-Mont American.
Last Week: The Cardinals won by forfeit over Kennett.
Rustin won 48-13 over Wissahickon.
Players to Watch: Jacob Rossman and Micah Bootman are tough runners for the Cards. Dayshawn Jacobs rumbled for 258 yards last week on the ground for Rustin.
Prediction: Upper Dublin 23, Rustin 16.

Lansdale Catholic at Bishop Shanahan
Day/Place: Friday, 7 p.m., at Shanahan.
Records: LC is 0-3 overall and 0-2 in the PCL Blue. Shanahan is 3-0 overall and 0-0 in the Ches-Mont National.
Last Week: The Crusaders lost 21-12 to Salesianum. Shanahan won 35-0 over Pottstown.
Players to Watch: Pat Daly roams the secondary for the Crusaders. Shanahan’s Brandon Choi had a big day running the football last week.
Prediction: Bishop Shanahan 21, Lansdale Catholic 14.