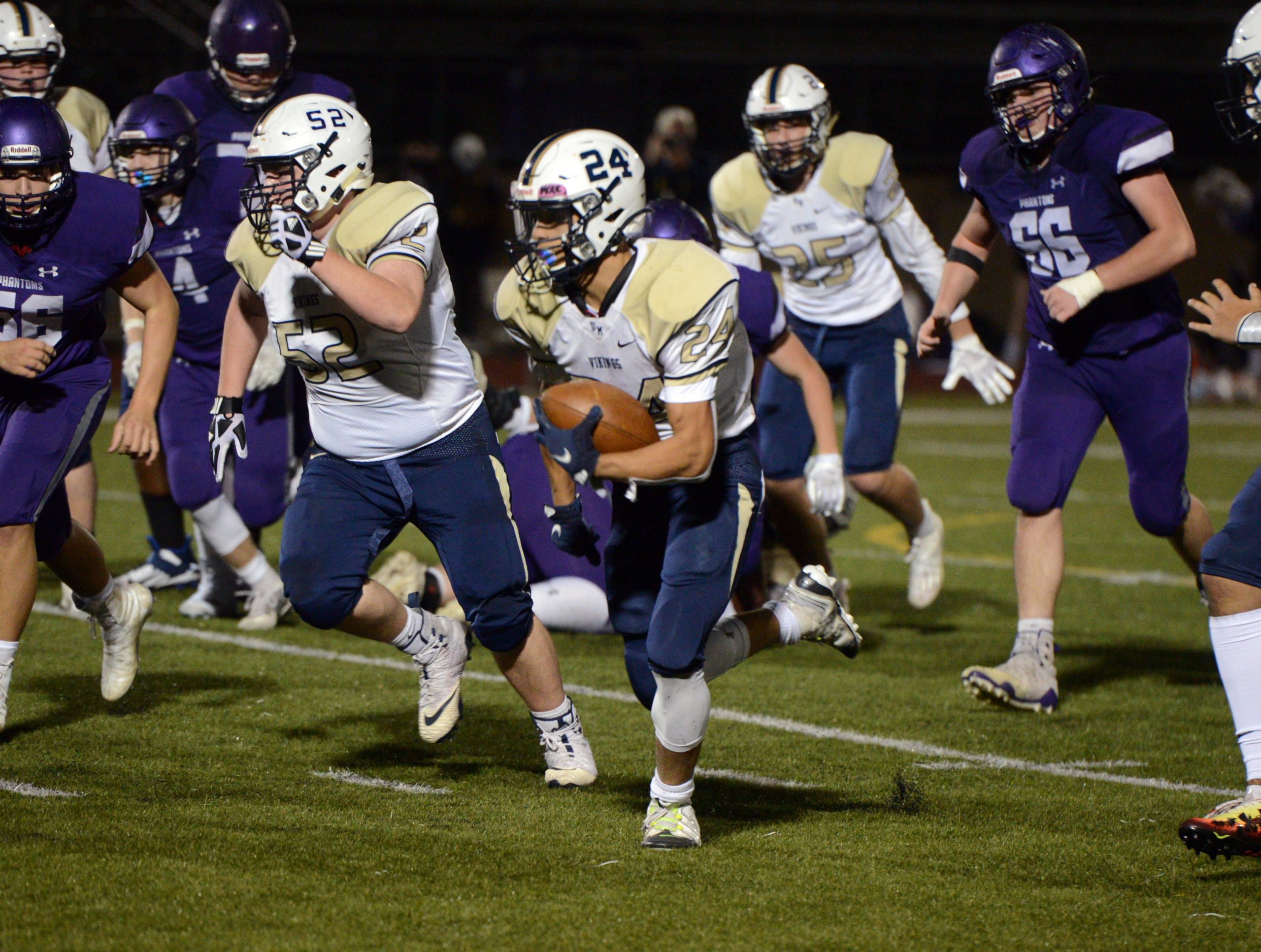 Boyle turned around and pointed to the slogan on the back of his shirt: ‘Pound the Rock.’

“We went into it with a pound-the-rock mentality,” Boyle’s senior line mate Stefano Nikolaou added after the win. “Every play, just four to six yards a carry. Just keep pounding away, pounding away for four quarters. We finished the game and played a nice football game.”

“It’s a great way to do it,” Nikolaou added on getting the first win of the season. “We’ve been waiting for that all season.”

After an uninspired offensive start for UM, junior linebacker Nick Gerace sparked Upper Merion with a 72-yard interception return for touchdown on Phoenixville’s (1-2) first offensive drive. Alexander bounced a run outside to score two yards out with two minutes left in the first half to give the Vikings a 14-0 halftime lead.

Alexander broke off a 43-yard touchdown run on UM’s second drive of the second half to push the lead to three scores and dashed 41 yards on his next carry to set up Seals for a five-yard touchdown run with 28 seconds left in third quarter, sending the Phantoms into the fourth with a 28-0 advantage.

The scoring finished with a nine-yard touchdown by Alexander, followed by a 78-yard touchdown run by Phoenixville’s Owen Koch, who ran 18 times for 147 yards. UM kicker Cyrus Palladino was a perfect 5-for-5 on extra points.

“My head coach would say, ‘Pound the Rock,’ every time,” he added on the team’s mantra leading up to Friday night. “It’s the next play, a fumble, a pick, a touchdown, interception, anything. It’s the next play. We go forward until we get that dub at the end of the fourth quarter.”

UM freshman Jalen Alexander bounces outside for a two-yard TD run. Upper Merion up 14-0 with two minutes left in first half. pic.twitter.com/hvazn9kz8v

Coming off a 20-12 victory over Upper Perkiomen last week, Phoenixville entered Friday night’s contest down a handful of starters, including running back/linebacker Aidan Foley, and things got worse for the Phantoms early in Friday’s game.

Phoenixville starting QB Tre Davis and senior receiver and safety Max Strunk both went down with injuries on the Phantoms’ first drive. Freshman Ty Romance replaced Davis and completed 2-of-9 passes for 15 yards, including a 13-yard completion on his first throw of the game, and had a few deep balls just out of the reach of his targets.

“When you lose those two dudes, it hurts,” Phoenixville coach Anthony Ciarlello said. “And we knew that this is a well-coached team and the Wing-T is tough. We knew it coming. It’s the system we have to beat, and we couldn’t beat the system tonight.”

“(Romance) stepped in, he came in and he took some big hits tonight,” he added. “I’m grateful we have him as a backup.”

After allowing four first downs in the first quarter, Upper Merion didn’t give up a Phantoms’ first down until a long Koch run on the final play of the third quarter, keeping the ball on the Phantoms’ side of the 50 for much of the game.

Nikolaou described the Vikings’ defensive performance as ‘relentless’ and ‘unforgiving.’ Boyle credited Gerace’s interception return touchdown for setting Upper Merion on the path for its first victory early in the game.

“We knew it was going to be a pretty tough game at the beginning like all league games are, but once that happened we had a lot of momentum,” Boyle said. “We knew we could stop them on defense and we knew we could get going on offense. We just needed a spark to help ignite our team.”

Upper Merion 28, Phoenixville 0 with 28 seconds left in Q3 … Alexander breaks off a 40+ yard run and Qwynne Seals punches it in from five out. pic.twitter.com/E3OKBxflT4

The Phantoms hope to regain a bit of health before finishing their season against Pottstown next week. It will be Phoenixville’s fourth contest against one of their typical Frontier division rivals in four games.

“Monday, we show up and we do the little things again because I think we forgot how to do the little things,” Ciarlello said. “Tackling was terrible tonight. We probably missed 30 tackles. Their running backs run hard. We just didn’t finish. We will work on finishing Monday.”

Upper Merion will travel to Muhlenberg next week, hoping to send its seniors off with another win and give a young core another confidence booster heading into next season.

Vikings’ coach Victor Brown is hoping his team will have a chance to replicate the feeling they had after claiming Friday night’s win.

“It’s nice to get a win,” Brown said. “It’s going to be nice to see these guys enjoy it and laugh and smile. More than anything, that’s the reason we came back, so these guys can have some fun. They’ve worked hard, and I’m just happy to hear the laugh and hear them enjoy themselves.”

Garnet Valley shakes off Royals’ jabs, win easy decision
Carroll’s Lamey does it all as Patriots move in state playoffs