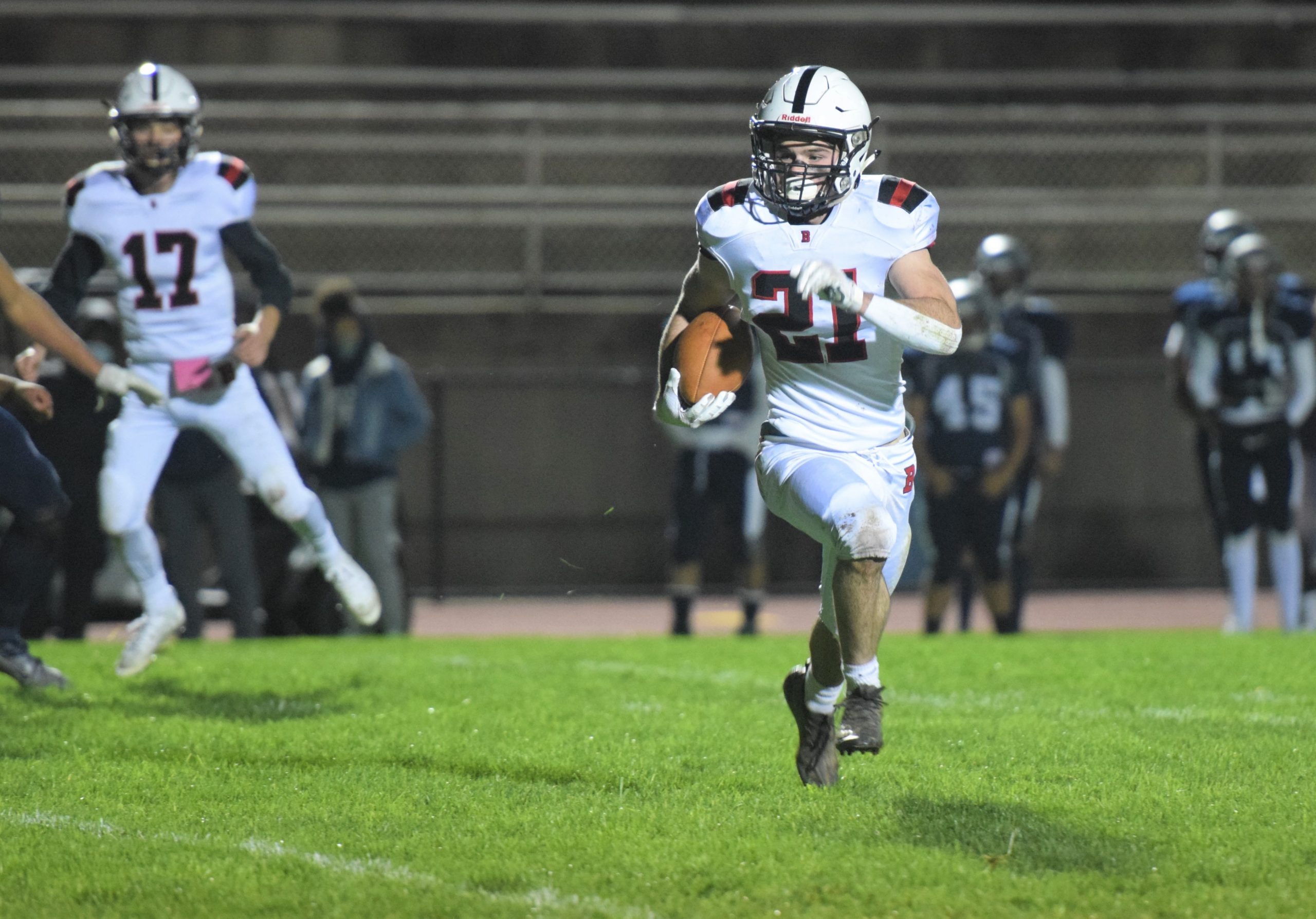 BOYERTOWN >> Jon Myers ran for 143 yards and two touchdowns as Boyertown finished the season with two wins in a row with a 20-9 decision over Pottsgrove Friday night at Memorial Stadium.

The Bears (2-5) forced four turnovers and rushed for 290 yards, including 70 by Ryder Gehris and 61 by Leo Egbe. Rylee Howard rushed for 98 yards and caught three passes for 59 more for the Falcons (2-2), who will finish up their schedule with a home game next Friday night against Pope John Paul II.

“We went through a lot this season,” said Myers. “Everybody had their heads in the right place tonight. The younger guys really stepped up, like (quarterback) Ryder Gehris, who showed great leadership in the huddle all week.”

“You go through a couple growing pains, but the last couple of weeks, they figured it out,” said Boyertown coach T.J. Miller. “I’m proud of them.”

The Bears punted and turned the ball over on downs on their first two possessions. But Brandon Shane wrestled the ball away from a Falcon receiver for an interception, setting the hosts up at the Pottsgrove 14 yard  line, and Myers scored on a 13-yard run two plays later with 1:15 remaining in the opening quarter.

Then Noah Segal recovered a Falcon fumble at the Pottsgrove 48 midway through the second quarter. And again, it took the Bears only two plays to score, with Egbe breaking free at the line and sprinting 47 yards into the end zone.

“We had a lot of confidence, a lot of big plays,” said Myers, a 5-9, 155-pound senior. “The line had a phenomenal game, blocking out on the edge and up the middle.”

Luke Kaiser booted a 33-yard field goal for the Falcons late in the first half to make it 13-3 and Pottsgrove quickly got the ball back on an interception by Ryan Sisko. But Tristan Reynolds picked off a pass for the Bears on the next play to maintain the 10-point lead at the intermission.

Boyertown came up with another big play on defense in the third quarter when Joey Dulin recovered a fumble to end an 86-yard Pottsgrove drive to the Bear 11.

Then the Bears put together their longest drive of the night – 73 yards on eight plays – late in the third and early in the fourth quarter, with Myers scoring on a 7-yard run with 8:27 to go. Pottsgrove scored on the last play of the game on a 10-yard pass from Sisko to Justin Wescoat.

Boyertown wound up with a 289-192 advantage in total yards as the defensive front dropped Falcon ball carriers for losses 11 times. Howard had the biggest play of the night for Pottsgrove, a 65-yard run.

“The defense was lights out,” said Miller. “Up front, giving time to limit the explosiveness of No.8 (Sisko).We were able to sustain some drives and make some big plays.”

The win snapped a nine-game losing streak against the Falcons for the Bears, who took a 20-19-1 lead in the all-time series as a result.

“It was an emotional time, great last game of the season,” said Myers. “Nothing else better than going out with a win.”

“Any time you can end the season with a win, or two in this case,” said Miller. “Time to hit the weight room and get ready for 2021.”

PG-Wescoat 10 pass from Sisko (no attempt)