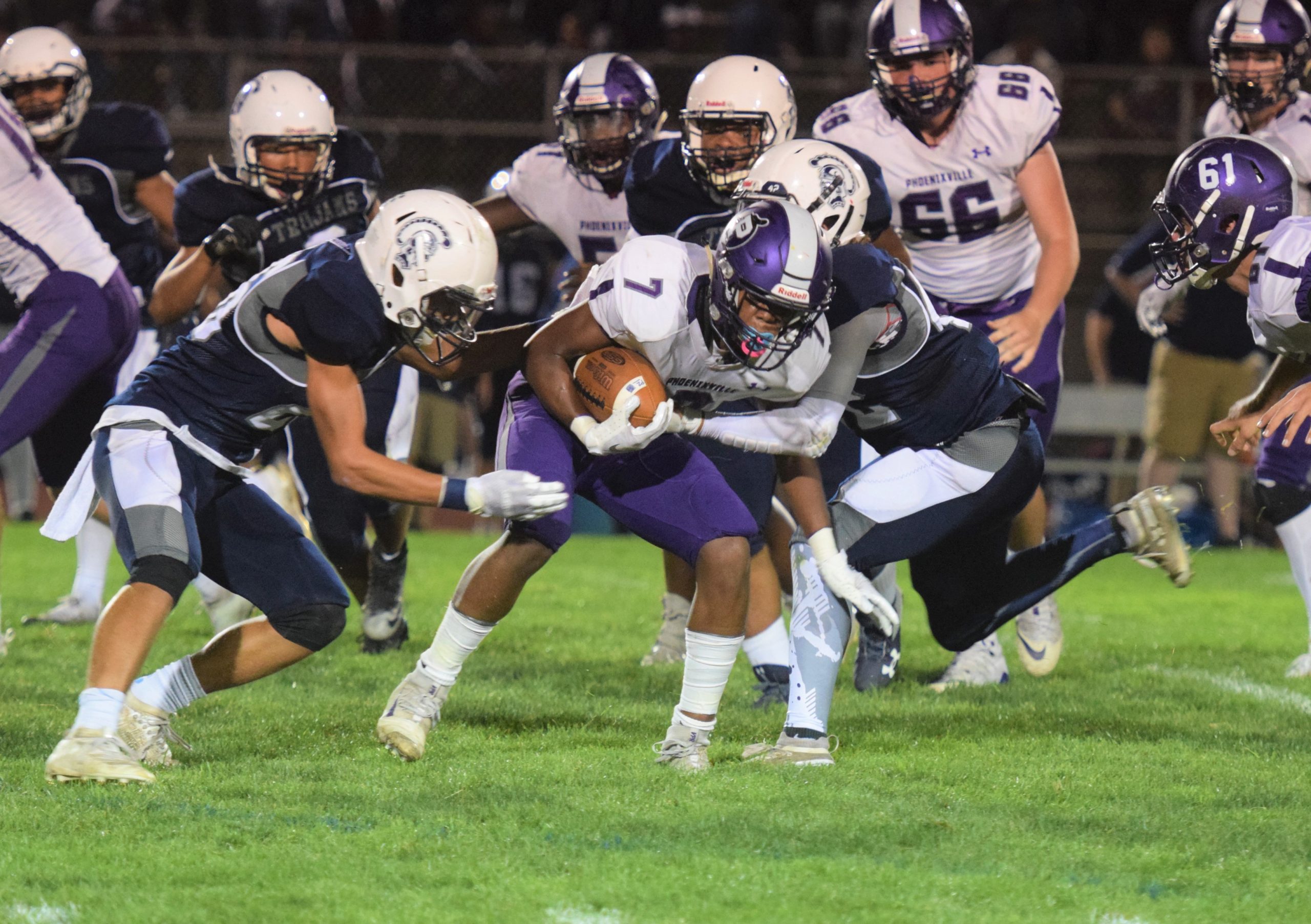 Think about the last time you took a new job. How long did it take you to get up to speed? A couple months? Maybe the better part of a year?

Phoenixville’s interim head football coach Anthony Ciarlello took his new role Sept. 27 – less than five weeks ago. And given the current environment around high school sports, there was no guarantee he’d ever report to work, so to speak.

“At the time, the talk was they might allow us to start again,” recalled Ciarlello. “No promises or guarantees.”

In the end, Phoenixville Area School District did approve a return to play Oct. 13. So it was that the Phantoms, with only about two weeks of true preparation, went to Upper Perkiomen Friday night and claimed a 20-12 victory.

Tre Davis ran for 149 yards and a score, with Owen Koch and Ahmid Spivey adding Phoenxiville’s other touchdowns on the night as they overcame an Upper Perk squad that’s claimed two victories over 6A Liberty Division schools this year.

“I can’t say enough about the resolve of a group of kids – a core group of about 28-30 players – who haven’t lifted since March 12 going out there and putting up a fight on Friday nights,” said Ciarlello.

The sacrifices don’t stop at the football field either. As part of the return to play, Phoenixville’s football players have agreed to continuing virtual learning until at least the end of football season to reduce the possibility of potential exposures. Some may joke about the concept of kids ‘sacrificing’ going to school every day, but with limited opportunities for socialization these days, it’s no small concession.

“Jack Kelly, our senior kicker, came to me and volunteered,” recalled Ciarlello. “He said, ‘Coach, if we have to stay virtual, that’s what I’ll do. This team deserves a chance.’”

The Phantoms plan on playing a four-game slate this season, with contests against Upper Merion next week and a trip to Pottstown on November 13. But Ciarlello has made it clear to the team they can’t think too far ahead right now. “In this COVID-impacted world, all we have is a series of moments,” he reasoned. “We don’t know if we’ll play next week, we didn’t know if we’d play at all this year. So we enjoy every game, every opportunity to play together.”

When Dave Lotier took the Methacton job in 2018, Pottsgrove greeted him with a 34-0 shutout in week two.

Two years later, Lotier’s progress with the Warriors program has a symbolic measure – a 17-6 win over the Falcons on Friday night.

Justin Carfrey ran for 91 yards, while junior Dan Brandi had an 80-yard TD run and connected with QB Mike Merola for Methacton’s other score. Dan Meier led the defense with two sacks.

“I didn’t want to harp on [the 2018 loss to Pottsgrove] throughout the week – why bring up bad memories?” reasoned Lotier. “But in my mind, I had a feeling we might be able to match up with a team like Pottsgrove. We hung in there with Spring-Ford, Perkiomen Valley, the big dogs in our division. It was time to get a win against one of them.”

Lotier has often talked about the progression from the team he took over in 2018 (who’d been winless the previous season) until now and going forward. Next week, the Warriors try for their first winning campaign since 2014 when they travel to Council Rock South.

“We’re treating it like a bowl game in college,” the coach said. “No playoffs for us this year, but if it weren’t for that abbreviated field (only four teams qualified, as opposed to the usual 16) we might’ve been in that conversation. Council Rock South is of the same ilk, they would’ve been on the cusp of a playoff berth. It’s a team from a strong league, and we look forward to the challenge.”

“Their first year was my first year,” he concluded. “Several of them played a lot that year, and they’ve bought in ever since.”

Meanwhile, Pope John Paul II continued the process of cementing themselves as a premier program in the area by topping Perkiomen Valley, 34-22 –the program’s first win against a 6A opponent since the classification was created in 2016. The fact they did it against perennial contenders like the Vikings only furthered the accomplishment.

Quarterback Rocco DiRico threw for 239 yards and a score in just his third career start, enjoying big nights from receivers Justin Kormos, Liam Haffey, and Kese Williams. Williams, just a sophomore, also threw a touchdown pass of his own to Haffey in the early going. Josh Little and Steele DePetrillo kept Perkiomen Valley honest with the running game, with DePetrillo finding paydirt twice and Little icing the contests with a 65-yard score of his own in the early fourth quarter.

The late start to the season means no opportunity for the Golden Panthers to repeat last year’s feat of a District 1/12 title in their new 4A classification, but their season will continue when they host Cardinal O’Hara Saturday before heading to Pottsgrove on Nov. 13. An undefeated season, punctuated with wins against powers like Perkiomen Valley and potentially Pottsgrove, would solidify PJP’s standing in the area’s hierarchy.

“I don’t know if we’re [one of the elite teams in the area] yet,” said head coach Rory Graver. “I still think we’ve got some things to accomplish. But it’s definitely one of our goals, to move into that conversation among the PAC’s top programs.”

Around the Area >> Boyertown broke through for their first win of 2020 against Pottstown, a 33-6 decision in freshman quarterback Ryder Gehris’ first start. Gehris ran for a pair of scores and threw another to Jon Myers, while Zach Davis was all over the field on defense, collecting 11 tackles including 1.5 sacks. The Bears’ defense held Pottstown below 100 total yards of offense.

Spring-Ford completed its undefeated regular season with their toughest test to date, outlasting District 3’s Cumberland Valley by a score of 20-14. As advertised, Cumberland Valley provided a much stiffer challenge than their 1-5 record would’ve indicated, breaking the Rams’ shutout streak that dated back to Week 2 in the first quarter and adding a late touchdown pass. But in between, SF received rushing touchdowns from Andrew Yoon, quarterback Ryan Freed, and Harry Adieyefeh to preserve the victory. Their vaunted defense may not have approached some of the lofty standards set during the 2020 season, but they did hold CV to 174 yards of offense and forced three turnovers.

The Rams advance to the District 1 Class 6A semifinals, where they’ll host third-seeded Souderton of the Suburban One Athletic Conference on Friday night.

Finally, Owen J. Roberts wound down its 2020 season with a 21-0 victory over Upper Merion to finish at a record of 3-3. Avrey Grimm concluded his breakout season with both a rushing touchdown and a defensive score on a fumble recovery, while the Wildcats defense bounced back from a few rough outings to claim their first shutout of the season.

“All year, we kept going at it like we were going to play,” summarized coach Rich Kolka. “We were fortunate our district let us play. We were lucky enough to get six [games] in.”