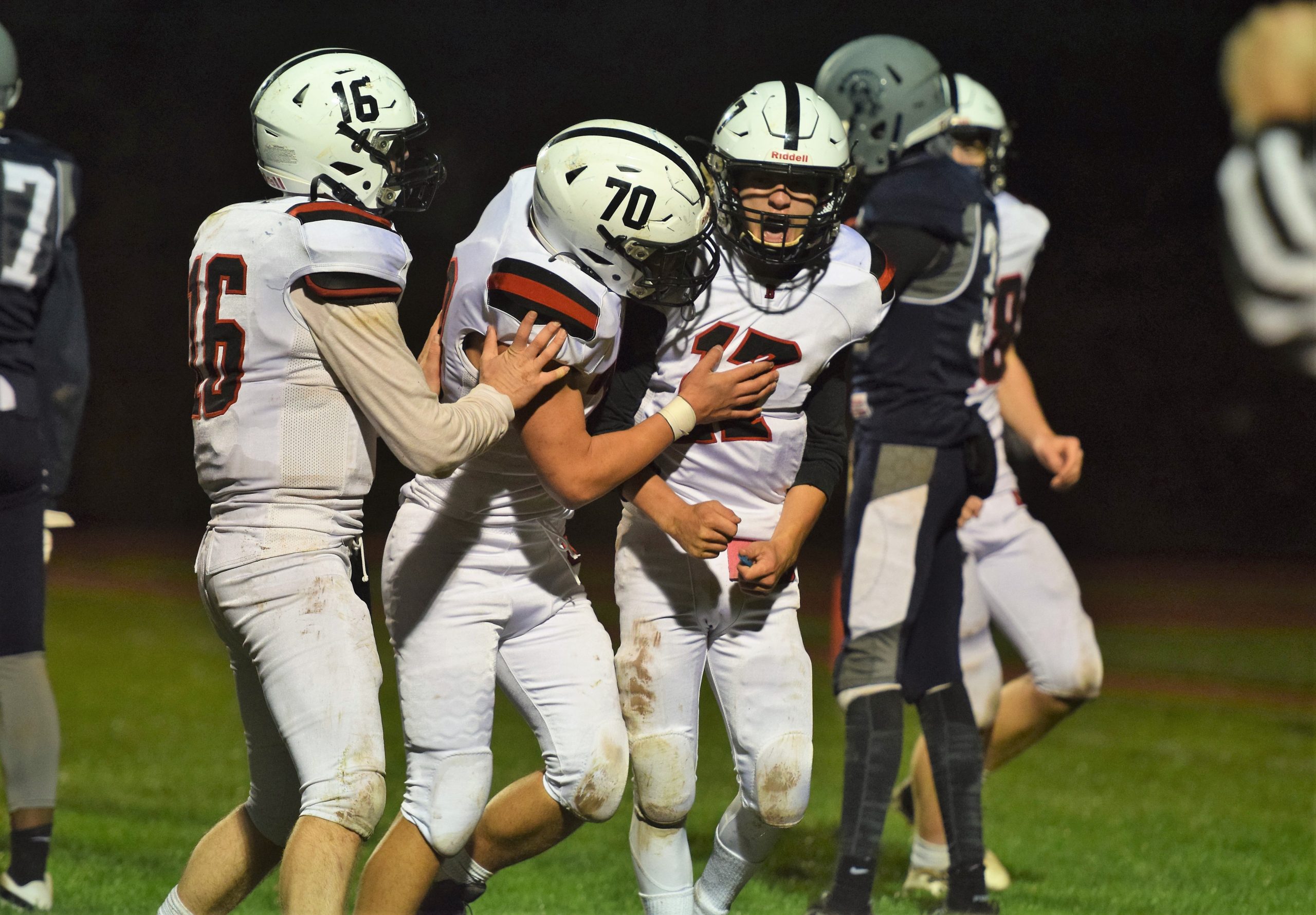 Boyertown quarterback Ryder Gehris, right, is congratulated by Anthony Bauer (70) and Noah Segal (16) after his TD run in the second half against Pottstown. (Austin Hertzog - MediaNews Group)

POTTSTOWN >> At 0-5, the Boyertown football team was in need of a restart.

Or, in the case of Zach Davis and Ryder Gehris, just a start.

Senior running back/lineman Davis and freshman quarterback Gehris made their respective first starts of the season and played major roles in Boyertown breaking its winless funk with a 33-6 against Pottstown at Grigg Memorial Field Friday night.

Davis, playing his first game since an offseason Jones fracture in his right foot, was a menace while playing defensive tackle for the first time and racked up 1.5 sacks, a strip sack and 11 tackles for the Bears (1-5). Gehris, who saw snaps last week before earning his first start as a rookie Friday, ran for two touchdowns and hooked up with senior running back Jon Myers on a 26-yard touchdown pass – his lone completion for the run-heavy Bears – in the second quarter. Myers scored three total touchdowns, including runs of 2 and 5 yards while running for a game-high 77 yards.

Boyertown scored touchdowns on three consecutive possessions in the second quarter to build a 20-0 lead, a decisive stretch in the game.

“The struggles we had this season – we had heartbreaking losses, Perk Valley, Upper Perk was a game we should have won – but this game feels good because of how we battled,” said Myers.

Bears head coach TJ Miller was thrilled to see his group ready to respond despite a winless run through the five-game official Pioneer Athletic Conference season.

“I feel great, our guys feel great,” Miller said. “I’m proud of our guys because they fought through. We’ve been through a lot this year and we fought through it and I’m proud of how we reacted. We have great senior leaders that have bought the ‘Start the Tractor’ culture that when things are bad, you’re going to wake up and start the tractor and get back to work just the same as when things are good you’re going to start the tractor and get back to work.” Boyertown’s Jon Myers rushes to the outside for a touchdown in the first half against Pottstown. (Austin Hertzog – MediaNews Group)

Pottstown senior wide receiver Jahzeel Watson broke out in the second half with six of his seven receptions for 93 yards, all seven completions for sophomore quarterback Mason Miller (7-for-10, 93 yards). Malachi Neely ran for a team-high 51 yards on 12 carries and a touchdown, the junior’s 8-yard touchdown run with 8:36 to play allowing the Trojans to avoid the shutout. Senior defensive end Sincere Strimpel starred on the defensive side with three sacks.

Pottstown coach Jeff Delaney was pleased with the Trojans’ progress despite falling to 0-2 after a season-opening 42-6 loss to Bishop McDevitt.

“We got way better tonight than we were last week,” Delaney said. “We still made mistakes but you saw glimpses of ability when they execute. We’re progressing and we have to keep that in mind. We didn’t even think we were going to have a season.”

While the Bears were practicing all offseason and were playing their sixth game, Pottstown only began practicing Oct. 5 while being shut down by COVID-19 precautions and didn’t know if a season would ever come.

It’s an experience Davis could empathize with. So Friday’s win was a different kind of satisfying for Davis, who could only patrol the sidelines while recovering from the 6-8 week foot injury he suffered in the summer.

“It feels great to be back,” he said. “Just to be able to practice with the guys this week, I completely missed it. I was helping with the JVs while I was out. But being able to come back and play and have the game I wanted to have – I was hoping I would perform like I did tonight – I’m really happy.” Miller’s belief that Davis could have an impact on the line – he’s listed as a linebacker on the Bears’ roster – certainly paid off.

“Zach Davis comes back who we’ve been missing all year and was able to step in and play a nose (tackle) position,” Miller said, “a position he’s never played before, against a Wing-T team and we were hoping he could blow up the guards and he did a good job doing it.”

Davis, who also contributed some hard yards from fullback with seven carries for 28 yards, was joined by Luke Ordway (6 tackles, 2 tackles for loss, fumble recovery) and Joe Slowik as impact players on defense that benefitted from four Pottstown fumbles (9 total), three of which were recovered by sophomore Cole Marinello.

Myers, who boosted his season TD total from one to four Friday, was impressed with the rookie under center.

“We had a freshman quarterback Ryder Gehris step up today and he led us to a win,” Myers said. “He showed amazing leadership during practice this week and it was something where younger kids and older kids looked up to him.”

Joey Dulin (5 carries for 67 yards) and Leo Egbe (15 carries for 60 yards) also contributed to Boyertown’s 224 yards on the ground. Watson and Strimpel are two of only three seniors on the Pottstown roster and participated in the team’s traditional Senior Walk across the field after the game. Watson especially has been a bright light not only on the field, but as a positive leader.

“I’m so proud of him because he could be (discouraged), but he sees it,” Delaney said. “He didn’t think he was going to get a season, so to get this is a gift for him and he’s playing like that. He’s embraced it as a leader to be positive for the guys.”

“Same thing with Sincere – he’s a transfer from Detroit who is only in his third year playing football – and they’re enjoying every little moment. I think for these guys, that’s big.”