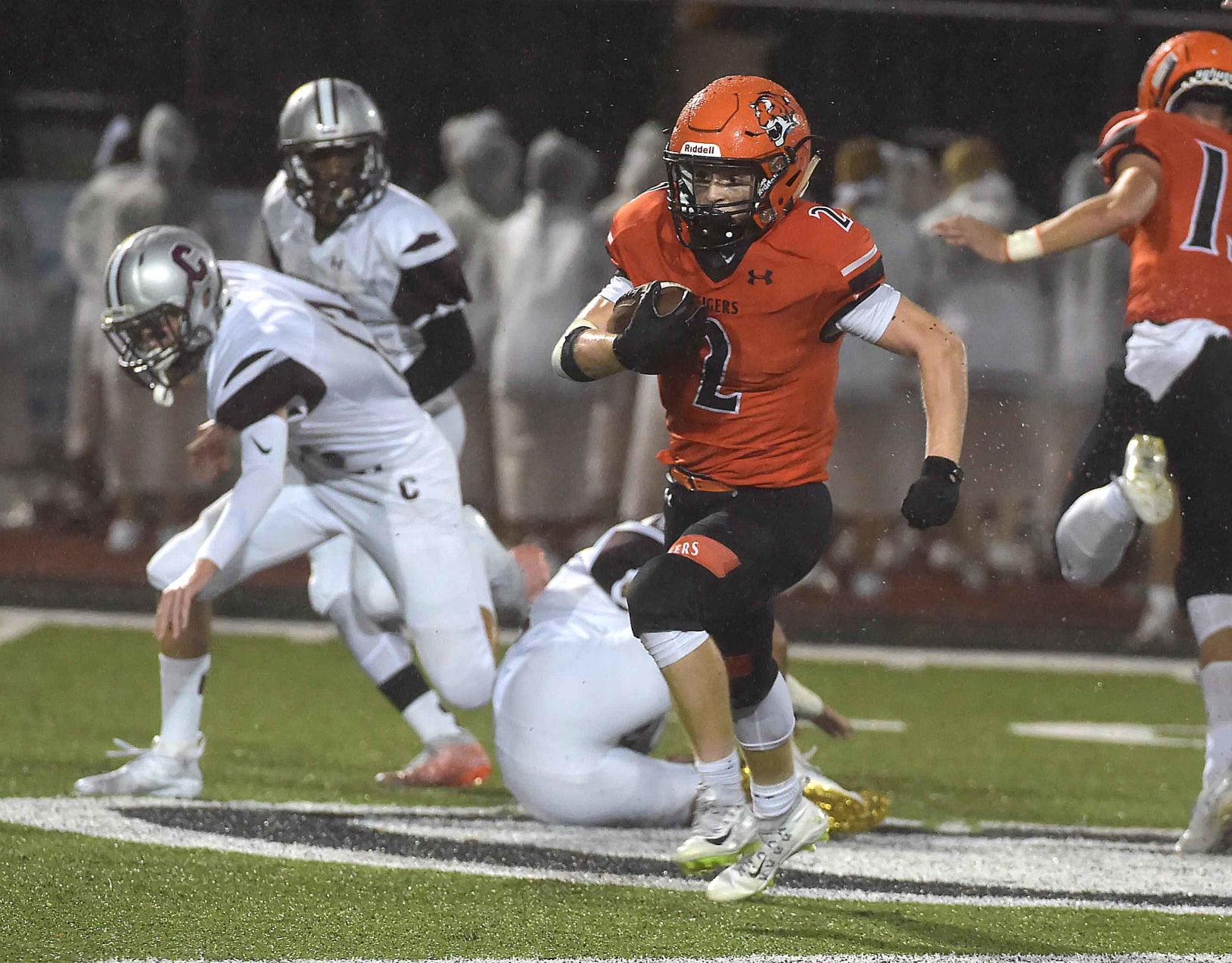 The boys in the trenches were excellent in the fourth quarter, on offense and defense. Co-captain Joey Goodman, who made a key stop in the backfield on Strath Haven’s final possession, knew both lines had to make their individual mark on the game. Oh, and it helps that they are blocking for the most explosive player in the Central League in junior running back Charlie Box.

Box caught a 13-yard pass from Joey Paoletti in the end zone to put Marple in front in the fourth quarter. The Tigers added a safety and held on for 33-27 win over the Panthers, improving to 2-0 this season.

“We’ve all played together since we were at a young age, when we were rivals at middle school at (Sts.) Pius and Annie’s,” Goodman said. “By sophomore year we all hit the weight room and started getting varsity time. Come junior year, Chris Meiklejohn comes over to the O-line and just started playing great and got a starting job this year. Anthony Armento is stepping up at center, his snaps were great tonight. All of us, we keep improving our chemistry and we are coming together.”

It was a difficult challenge for Marple Newtown’s entire defense for three-plus quarters. Strath Haven’s run game had its way, especially in the first half. Haven’s opening drive of regulation chewed up more than 10 minutes of clock. Running backs Jaris Adams, Matt Shuler, Christian Mazur and Chase Barlow were having a field day.

But when they needed a big stop, Marple’s defense penetrated the backfield and forced a three-and-out with four minutes left. CJ Lane stopped Matt Shuler for no gain, then Goodman was able to tackle Shuler on the next play for a loss of three yards. Jack Ryder threw an incompletion on third down, then a high snap that sailed over the punter’s head on fourth down resulted in a safety for the Tigers.

“I saw the play developing, I had the jump on the snap,” Goodman said. “We had it schemed up. They can run it inside to the right or outside to the left. As soon as I saw the guard turn his hips, I broke. it was a big-time play and I had to make it, so I just went for it.”

Marple scored 21 straight points to take a 24-14 advantage late in the third quarter. But Haven kept fighting. Barlow ripped off a 24-yard run to set up a Ryder one-yard sneak into the end zone with 30 seconds left in the third. Shuler intercepted Paoletti on Marple’s next possession, then ran eight yards to paydirt to put Haven on top, 27-24.

Ryan Simpson had a huge kick return to give Marple excellent field position. On third-and-long, Paoletti found Box streaking across the middle of the field and into the end zone for a 13-yard score. The Tigers went in front and never looked back.

“We call that a jerk route, so I’m either running a seven-yard out or fake the seven-yard out when there’s no safety over above, so I just faked it and came straight across,” Box said. “We knew it would be a tough game, but we stuck to our game plan. We’re all brothers on this team and we stuck together and came out with a big win.”

Shuler ran for a team-high 74 yards for the Panthers and Christian Mazur finished with 61 yards.

“I thought we had the game (won), we just had to drive down the field and score,” Shuler said. “I don’t know what happened, I thought it was all in our hands, but we didn’t get it done.”

Pope John Paul II breaks out, breaks through with win over Perkiomen Valley
Springfield scores in waves in win over Harriton