Pope John Paul II breaks out, breaks through with win over Perkiomen Valley 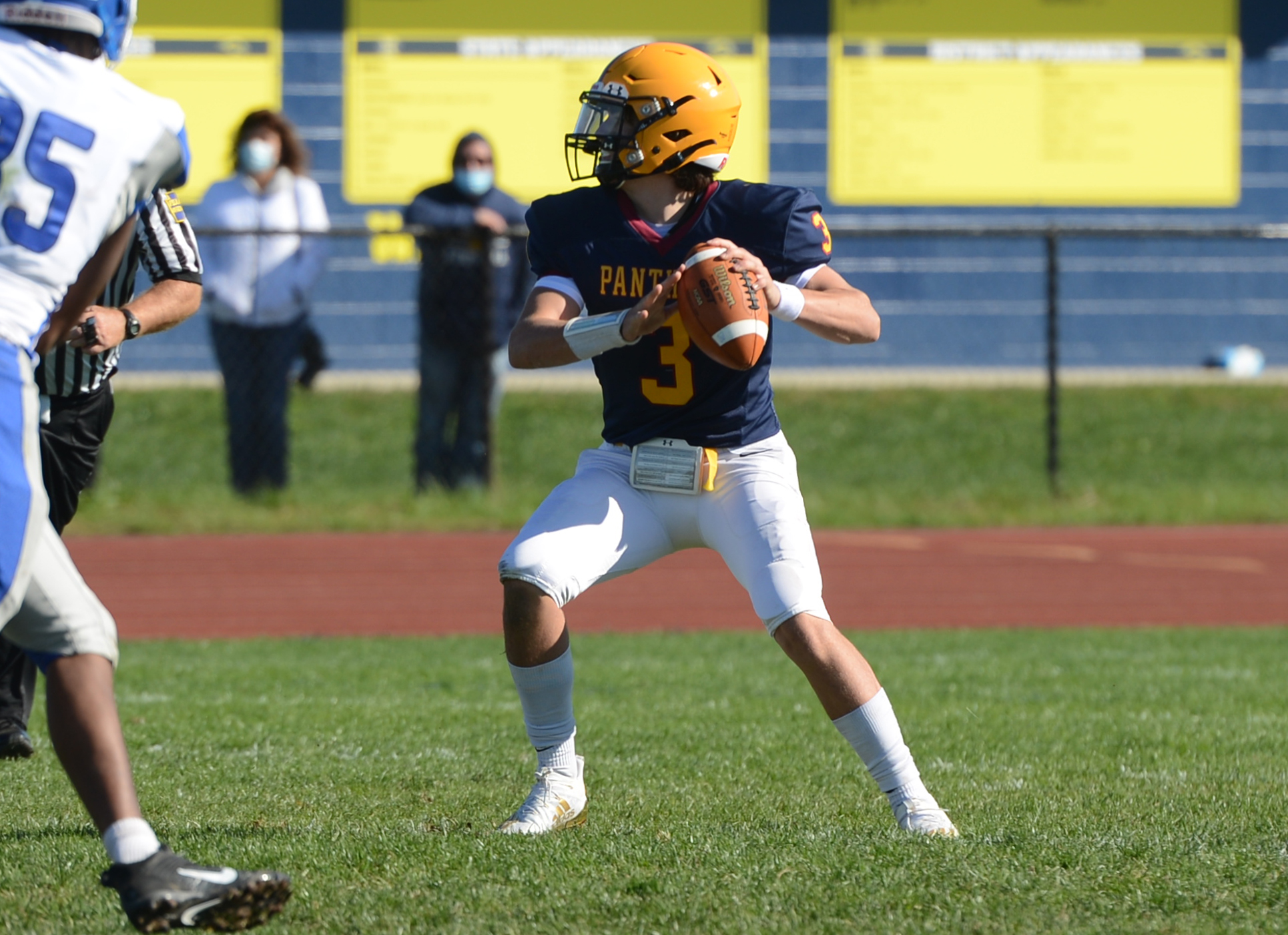 GRATERFORD >> Earlier this week, Pope John Paul II coach Rory Graver lamented the fact that despite their undeniable progress as a program, his Golden Panthers had struggled in matchups with the Pioneer Athletic Conference’s larger, or 6A schools.

“One of these days,” Graver said, “we’re hoping we’ll knock down that door.”

The Golden Panthers rode an 18-0 second-quarter margin to a 19-point halftime lead and withstood a late rally from the hosts to take home a 34-22 victory, the school’s first against a 6A opponent since the classification was created in 2016.

The stars for PJP were numerous and covered both sides of the ball. Quarterback Rocco DiRico threw for 226 of his 238 yards before halftime, going for 10-for-18 and adding a touchdown pass to another offensive star, sophomore WR Kese Williams, who caught and threw a touchdown pass. Williams’ 77-yard catch-and-run gave the Golden Panthers a double-digit lead early in the second quarter, and the margin never got any closer.

Josh Little had 104 yards rushing, including a 65-yard score to seal the game in the fourth quarter. Justin Kormos added 106 receiving yards, and Steele DePetrillo made the most of four carries, scoring the bookend touchdowns in PJP’s big second quarter.

But it could be argued that the Golden Panthers’ defense was the headline act. The team accumulated six sacks (three by senior lineman Ambrose Colliluori, who set up a temporary home in the Vikings’ backfield in the opening half) and held Perkiomen Valley to negative-4 yards rushing for the contest. Little and Chris Bruder made repeated stops over the middle, often forcing PV into desperate third-and long or fourth-and-long situations despite the Vikings enjoying excellent field position for much of the night.

“I’m extremely proud of our guys,” said Graver. “A full team effort. I’m a little disappointed we gave up a few scores at the end there, but in the end, a big, big victory against a great program.”

A quiet first quarter exploded into offensive fireworks in three minutes as the two sides exchanged 50 yard-plus scoring passes. PJP went first, as Williams took a pitch and threw down the sideline to an open Liam Haffey for a 53-yard score. A two-point pass from DiRico to Justin Kormos made the score 8-0 PJP.

“Kese is a dynamic, two-way player who brings a lot of speed to our team – and that was a beautiful throw,” said Graver.

But the Golden Panthers would take control in the second quarter, as DePetrillo hammered home the first of his two short TD runs in the quarter on the stanza’s first play, widening the lead to 14-7. Two minutes later, DiRico found an open Williams, who burned through the secondary to double the Golden Panthers’ lead.

“This was the championship – to us,” said Williams. “Last year, we played Spring-Ford, that was a tough loss, but for us this was as big as a PAC championship game.”

After an exchange of punts, senior WR Justin Kormos turned a jailbreak screen pass from DiRico into a 73-yard gain, setting up DePetrillo’s second scoring run of the quarter and a surprising 26-7 halftime lead for the Golden Panthers.

The determination of Colliluori in particular, but really the entire PJP defense, was apparent. Despite giving away some size to the Vikings, their relentlessness yielded some fourteen tackles for loss on the evening, including six sacks of Kohler.

“After we prepared for Neumann-Goretti [the original first game for the Golden Panthers before the season postponement],” said Colliluori, “that’s what we preach. We live the idea of playing without fear, that’s what PJP does.”

Brayden Basile provided the only points of the third quarter with a 30-yard field goal to draw PV within two scores, 26-10, but Little put the icing on PJP’s cake with a powerful 65-yard scoring run down the right sideline with about nine minutes to play.

Perkiomen Valley wouldn’t go quietly on their Senior Night, as Kohler carried for a four-yard touchdown and found Posner in the end zone for a second time to provide the final margin.

At a record of 4-2, the Vikings will host Daniel Boone next week and finish the season at Quakertown on November 13.

“PJP’s a quick, athletic team,” said PV coach Rob Heist. “[DiRico] is a quarterback who can make plays, extends plays out of the pocket.

“But I’m proud of our kids too. We could’ve rolled over after that first half; instead we were a play away from making it a one-score game. It’s a testament to this senior class – I’m proud of the way they’ve led this team during this season.”

Meanwhile, the 3-0 Golden Panthers host the Philadelphia Catholic League’s Cardinal O’Hara next Saturday and travel to Pottsgrove for their finale on the 13th. After last season’s District 1/12 Class 3A championship, the Golden Panthers won’t qualify for districts in their new 4A classification due to not having played enough games. But on Friday night, they proved they may well be the best team in the District at 4A.

Although they won’t get a chance to prove that, the class of 2021 now has its own a crowning achievement.

Asked what his senior class would leave as a legacy in the absence of a 2020 District 1 championship, Colliluori painted a picture of what PJP football has come to symbolize to he and his classmates.

“No disrespect to anyone else we play,” clarified Colliluori, “but tonight’s game was our testament to what we can do. We haven’t played Perkiomen Valley in four years, and we showed what we can do tonight.

“When I was in 8th grade, I started showing up to high school workouts. I remember being told we would start at the beginning of January, 6 a.m. in the weight room. That’s become a motto for us. Come out every day, no matter what. This year, we only hoped we would get a season, but we were out there every day regardless. Grit and heart – that’s what our class stands for.”