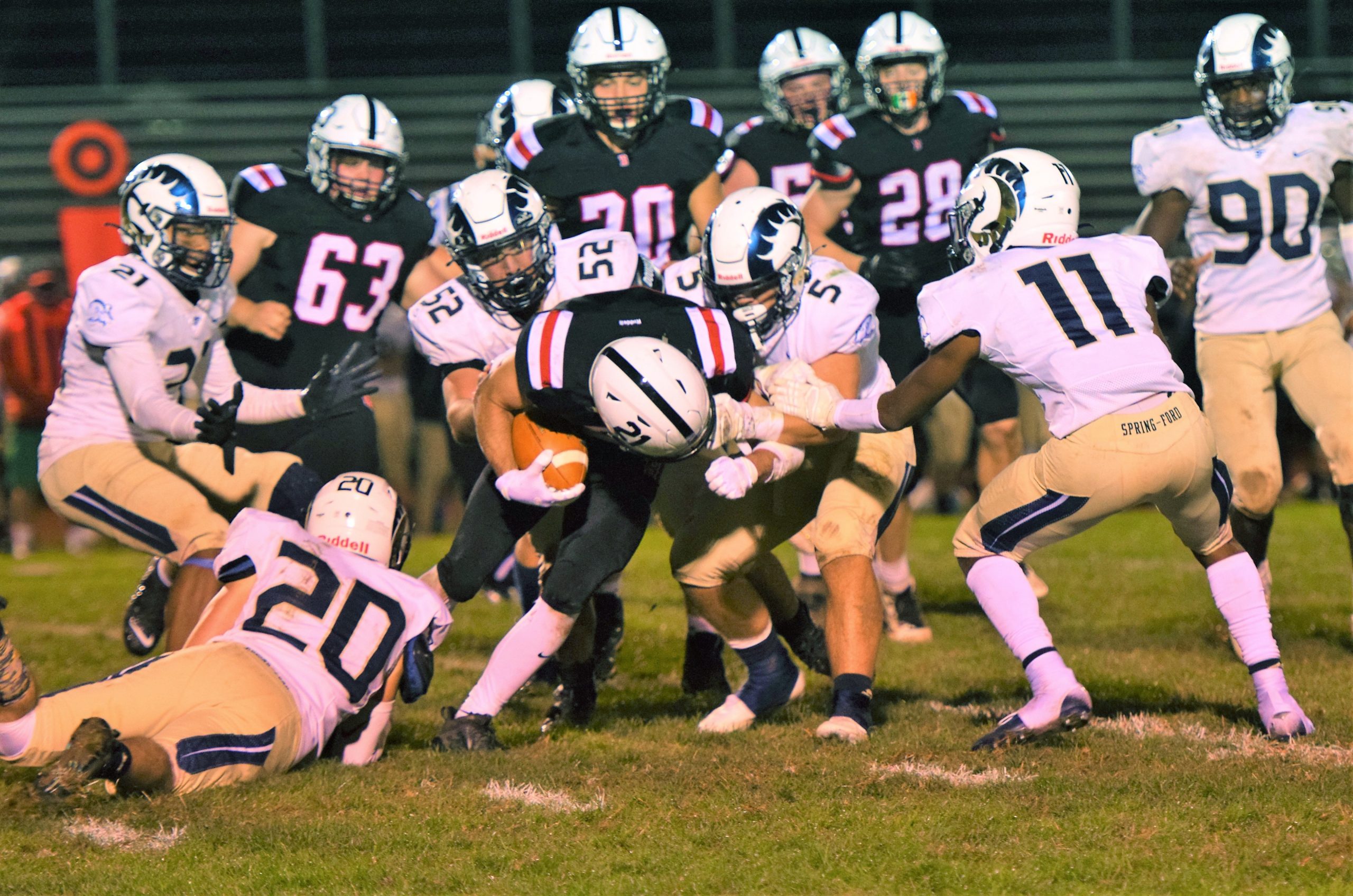 Sounds obvious enough, but maintaining that zero on the other side of the scoreboard has become the stated goal of Spring-Ford’s defense this fall.

When the 4-0 Rams take the field at Owen J. Roberts (2-2) Friday night, they’ll be carrying a shutout streak that spans the last nine quarters of football.

They’ll also be looking to claim their second consecutive Pioneer Athletic Conference championship, the first back-to-back titles at the school since 1994-1995.

“Over the years, (back-to-back titles) have been elusive,” said Spring-Ford head coach Chad Brubaker, who’s won three PAC title in his 11-year tenure at the helm of the Rams. “It’s not easy to win on the road, and it’s tough to win league titles.”

The ornery defense has taken center stage, allowing only 26 points in SF’s first four games – none before halftime.

“All 11 kids are competitors,” said defensive coordinator Jim Mich Jr., “and that’s important to us as coaches. We want kids who are looking to compete, and getting shutouts is one of our goals. Shutouts are hard to come by, but it resonates with these kids, the idea of shutting down an opposing offense.”

The strength of the defense is in its balance, as the coaches predicted prior to the season that defensive tackle and secondary would be standout units.

With two linebackers – senior Zach Marinello and junior Ryan Horvath – one-two in the team lead for tackles, and senior defensive ends Nasir Cooke and Josh Hellauer tied with Horvath in tackles for loss, there’s no one area offenses can pinpoint to attack.

“I wouldn’t say we have one true, vocal leader – everyone’s involved in setting the tone,” said Mich. “The way they practice, the way they handle adversity in-game, it’s a combination of all these kids. Their play, their attitude, they rally around one another.”

Senior corner Naphtali Stine leads the Mercury area with three interceptions in a stingy secondary allowing just under 50 yards passing per game on average. The gaudy numbers don’t stop with the defense, as Cam Goldsmith has recovered a pair of blocked punts on special teams for scores this season.

“There’s no secret – we prepare for each opponent, and we have players who enjoy the Xs and Os, the chess match portion of the game,” Mich said. “The way we played against Perkiomen Valley (a 27-13 season-opening victory) was a confidence builder, and since then we’ve been improving week by week.”

The Rams enjoy depth as well, with Gavin Shafer fitting in seamlessly next to DJ Francis at defensive tackle in the absence of fellow junior Donnie Nicoline.

This week’s challenge comes in the form of an OJR offense that boasts both the area’s leading rusher and receiver in junior Avrey Grimm and senior Dante DeNardo respectively. Sophomore QB Michael Reed continues to improves week over week, setting a new career standard with 211 yards and two scores through the air in last week’s loss to Upper Perkiomen. The Wildcats saw their league title hopes ended last week and would relish the opportunity to play spoiler to Spring-Ford’s undefeated run.

“It’s not easy to go on the road and win, and it’s also a challenge when you win the league the previous year. You have a target on your back, and you’re getting every team’s best shot,” said Brubaker. “It’s a challenge to impart to the kids that they can’t look at what happened last week – you’re going to get each team’s ‘A’ game.”

Pottsgrove’s Rylee Howard cuts back for a huge gain during the second half against Upper Merion. (Austin Hertzog – MediaNews Group)

Pottsgrove (1-0) at Phoenixville (season debut) >> The Phantoms make their season debut by hosting the Falcons, 20-7 winners over Upper Merion last week in their own curtain lifter.

Both programs will take the field with heavy hearts following the passing of Todd Van Horn last weekend. Van Horn was a 1987 graduate of Phoenixville High and a recent inductee to the school’s Hall of Fame. He served as Pottsgrove’s Dean of Students, coaching lacrosse and wrestling at the school. Both his sons, Tyler and Zach, were Pottsgrove student-athletes and currently play in college – Tyler on the lacrosse team at Misericordia University, and Zach on the football team at Alvernia.

“He was a constant presence, a calming influence,” remembered Pottsgrove head coach Bill Hawthorne. “It seemed like Todd was everywhere. He always found time to be there. This will be an emotional game for both programs.”

Perkiomen Valley (3-1) at Methacton (2-2) >> Methacton coach Dave Lotier reinforced the idea that moral victories are a thing of the past in the Warriors’ program, so it’s somewhat ironic that Methacton arguably put forth their most impressive performance of the season last week, taking league leading Spring-Ford into the third quarter in a scoreless tie before the Rams claimed a 21-0 victory. Remembering Methacton-SF contests from as recently as a few years ago makes it impossible to dismiss the progress Lotier and his program have made.

This week, however, the Warriors look to take home a winning record in PAC play and regain the Battle Axe Trophy in their annual tilt with Perkiomen Valley. Lotier hopes for sustained pressure from the defensive line of Dan Meier, Mario D’Addesi, Quinn Shields, and Josh Cancro, giving a star-studded secondary time to make plays.

Meanwhile, the high-flying Vikings were forced into a dogfight by Boyertown, a battle they survived, 14-6. In winning a closer-than-expected decision, Perkiomen Valley proved they can win even without a vintage performance from area-leading QB Ethan Kohler, who even on a ‘quiet’ night added another passing and rushing touchdown. Coach Rob Heist lauded the play of his special teams, particularly punt returner Stephen Ciaudelli, and credited linebacker Gage Young with limiting Boyertown’s effectiveness out of the triple option.

Upper Merion’s Aaron Anderson runs to the outside for a touchdown during the second half against Pottsgrove. (Austin Hertzog – MediaNews Group)

Pope John Paul II (1-0) at Upper Merion (0-1) >> The Golden Panthers made their return to the field Saturday, forcing five turnovers in a 32-19 win over Conwell-Egan. Rocco DiRico sparkled in his first career start at quarterback with four TD passes, while DJ Clarked starred at defensive back and Ambrose Colliluori shined in the trenches on both sides, offering a performance that PJP coach Rory Graver called ‘one of the better games in his career.’

Colliluori and his linemates will need to step up once more against the size and experience of Upper Merion this week, as the Vikings look to establish their physicality, making room for backs Aaron Anderson and Jalen Alexander in the running game. Upper Merion will celebrate Senior Night before their home opener Friday.

Upper Perkiomen (1-3) at Boyertown (0-4) >> The Indians will be flying high after an impressive first victory last week over Owen J. Roberts. Junior RB Logan Simmon set an area high for the year with 222 rushing yards, while Hunter Flack shined both and quarterback and in the kicking game, where he hit a 45-yard field goal to ice the game. Brady Thompson was single out by coach Tom Hontz for an exceptional game on both sides of the ball.

They’ll try to make it consecutive victories when they visit Boyertown, who figures to employ similar tactics to last week, keeping Upper Perk’s explosive offense on the sidelines while they embark on methodical, clock-bleeding drives. The approach will require sustained performance from Roman Marinello, Leo Egbe, and Jon Myers, while coach TJ Miller also expects Noah Segal to continue making the right reads in the option game.

Bishop McDevitt (0-1) at Pottstown (season debut) >> Pottstown coach Jeff Delaney admits the Trojans are facing an uphill battle against the Philadelphia Catholic League’s Royal Lancers, who come in off a 35-14 loss to state powerhouse Archbishop Wood that was closer than the final score would indicate.

“They’re really good,” said Delaney. “They’re huge, and they’re fast, and they’ll be hungry after last week. But we’re excited to be back on the field. We have a challenging schedule and the younger players will get a heavy dose of experience.”

Delaney pointed to senior Jahzeel Watson and dual-threat sophomore QB/DB Joneil Oister as threats on both sides of the ball, while identifying Jared Hewitt as a potential breakout performer.

Governor Mifflin (4-0) at Daniel Boone (2-2) >> It won’t get any easier for the Blazers, as they welcome undefeated Governor Mifflin and standout class of 2022 RB Nicholas Singleton to Birdsboro on Friday night. The Blazers are looking to bounce back after lopsided losses against Berks Catholic and Conrad Weiser, with coach Rob Flowers acknowledging the team hasn’t played up to their capabilities the past couple of games.

This week, Coach Flowers is stressing meticulous preparation for the game with Mifflin, stressing clock control and elimination of turnovers. “I’m looking forward to seeing how we respond,” he said.