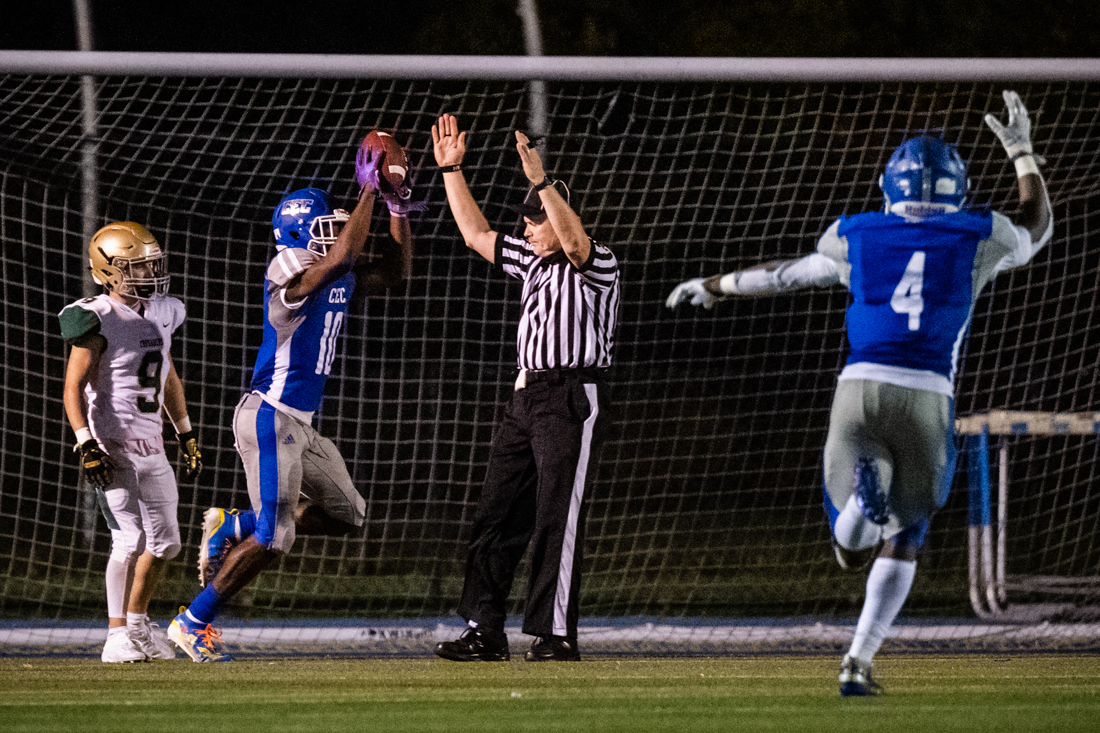 Conwell-Egan's Andrew Garwo (10) pulls in the game winning touchdown in the final minute of the fourth quarter to give the Eagles a 21-14 victory over Lansdale Catholic on Friday, Oct. 23, 2020. (James Beaver/For MediaNews Group)

LOWER GWYNEDD >> Put the ball out there and Andrew Garwo was confident he could do the rest.

“The quarterback – I just told him to throw it up,” the Conwell-Egan senior said. “I just knew if he’d get the ball in the air, I was going to be able to make a play on it.”

With the visiting Eagles and Lansdale Catholic tied in the final minute of the fourth quarter, Garwo made the deciding play – catching a 29-yard touchdown pass from Dante Morris with just 33.8 seconds left as Conwell-Egan earned a 21-14 victory at Wissahickon to spoil the Crusader football team’s season opener Friday night.

“Hell of a pass – was a hell of play,” LC coach Dom D’Addona said. “To my guys’ credit we played a lot of young guys and that first half had our share of mistakes. They had two games under their belt – one was a scrimmage I believe – and we had nothing. This is our first outing, to play, I’m going to say a veteran club, 21-14 I’m kind of proud of my guys. I mean it was a real good effort.”

Garwo also return an interception 36 yards for a TD in the first quarter as CEC (1-1) took a 14-0 lead into halftime before Lansdale Catholic (0-1) answered back in the third. Crusaders quarterback LJ Phillips rushed for a touchdown on the second half’s opening drive then threw for a TD 16 seconds later after an Eagles fumble to make it 14-14.

“I feel like we weren’t freaking out and that’s the best part,” said Phillips, who has verbally committed to Davidson. “We were calm, we knew what we need to do and we all trust each other and that’s the important part. Even though we’re all young and we got seniors but most of the guys that are playing are young guys. I’m happy where we’re at, sad that we lost but we got to get back at it next week and play Bonner.”

After turning the ball over on downs in LC territory on both of its previous two possessions, Conwell-Egan took over at its own 37 after a Crusaders punt with 2:52 left in regulation. On 3rd-and-13 from the 34, Colin Majors ran 22 yards on a reverse.  Four plays later on a 2nd-and-8 from the LC 29, Harris lofted the ball to Garwo going down the left side. Garwo raced past a defender, hauled in the pass and secured it in his grasp as he tumbled into the end zone.

“The corner try to tip it but the last second I just grabbed the ball,” Garwo said. “I knew if the ball’s in the air it was going to be mine no matter what. Coach believed in me, to call the last play for me I just knew I had to score.”

Lansdale Catholic quarterback LJ Phillips Jr. (7) was both a passing and rushing threat during the Crusaders’ game against Conwell-Egan on Friday, Oct. 23, 2020. (James Beaver/For MediaNews Group)

Trying for a last-second response, the Crusaders could only get to their own 47 before CEC sealed the win with a sack on fourth down.

“We had the momentum. We had it all,” Phillips said. “It was just great. I wish we had more time of possession on offense to work on stuff but that’s just how the game goes. And our defense played well, we just didn’t come through in the end.”

Despite the loss, the night was a positive for the Crusaders just for the fact they were on the field playing. The Archdiocese of Philadelphia cancelled the fall sports season for its 17 high schools Aug. 24 but reversed the decision Sept. 25. LC is scheduled to play five games – up next a visit to Bonner & Prendergast Friday. Conwell-Egan is at Bishop McDevitt Friday.

“It was a pleasure just to step on the field and say we’re actually going to play tonight,” D’Addona said. “But the kids are very excited to come out here. I give them credit, we worked out for five, six weeks over the summer and then they shut us down then they brought us back and then we don’t know what the schedule is, the schedule changed a couple times, up until last week it changed again.

Conwell-Egan’s Khian’Dre Harris (25) soars over Lansdale Catholic’s Matt Daly (9) to avoid a tackle and tack on some extra yards in a game from October 23, 2020. (James Beaver/For MediaNews Group)

Garwo finished with three catches for 67 yards as Morris was 7-of-12 passing for 92 yards. Khian’Dre Harris ran for 70 yards and a touchdown on 10 carries as CEC bounced back from last Saturday’s 32-19 loss to Pope John Paul II.

Phillips threw for 59 yards on 9-of-15 passing with a touchdown and interception and also added 21 yards and a TD on the ground. Josh Jackson added 40 yards on 13 carries.

The Crusaders collected just 44 yards in the first half before finally getting their offensive going on the opening series off the third – a 12-play, 62-yard drive that took 5:48 and cut the margin to 14-7.

After a false start made it 3rd-and-12 at the Egan 36, Phillips scrambled for 16 yards to move the chains. Then on a 4th-and-7 at the 17 Phillips connected with Luke Shrager for an 8-yard gain and a 1st-and-Goal. The next play, Phillips took a carry to the left side and scored on a 9-yard TD run at 6:08.

“I kind of knew we were going to get in the end zone,” Phillips said. “I felt that, so I just rode my line. And they really stepped up tonight and we only had like three weeks to prepare so I’m happy with what we did out here.”

LC recovered a fumble on the first play of Conwell-Egan’s ensuing drive and needed just one snap to tie the contest – Phillips rolling right then finding Tyler VanOsten in a bit of traffic in the end zone for an 11-yard TD strike at 5:52 in the third.

“I didn’t think it was going to get in there at first but I scrambled around and the pocket kind of broke down, I just kind of had to sidearm it in there,” Phillips said. “I wasn’t expecting him to be that wide open so I had like half a second. It was a great throw but a better catch.”

Conwell-Egan had a 3rd-and-3 at the LC 11 on the next series but was called for a false start, threw an incompletion than on fourth down lost five yards on a completion.

Jackson began LC’s drive with a 17-yard run but a holding call on the following play derailed the series and the Crusaders punted.

Conwell-Egan again moved the ball into LC territory but turned the ball over on downs after an incompletion on 4th-and-11 at the 33. The Crusaders went 3-and-out, giving the Eagles the ball back with 2:52 for what ended up being the winning drive.

Garwo scored his first touchdown of the night on defense. On the game’s first series, he cut in front of a receiver to snag the interception then dashed down the left side 36 yards for the pick six at 6:18 in the first quarter.

“I just saw on film today, I was watching actually, the tight end they love, cause he’s 6-foot-8, he’s a good player, Number 15 (Jimmy Casey) – they love bringing him in the middle,” Garwo said. “I just baited the quarterback, I knew if I can leave the middle open and then come back and make the play and he tried to grab the ball and just I took it from him and I saw green light after that.”

#FOOTBALL: 6:18 1Q Conwell-Egan 7, @LCCrusaders 0. Andrew Garwo with the pick six, taking an interception back 36 yards for a TD. pic.twitter.com/HNW3Y4rK9d

The Eagles went up 14-0 in the second quarter on a six-play, 64-yard drive capped by Harris’ 10-yard touchdown run at 5:11. CEC had a chance for more points before halftime, getting to the LC 10 in the final seconds but turned the ball over on downs after an incompletion on 4th-and-3.