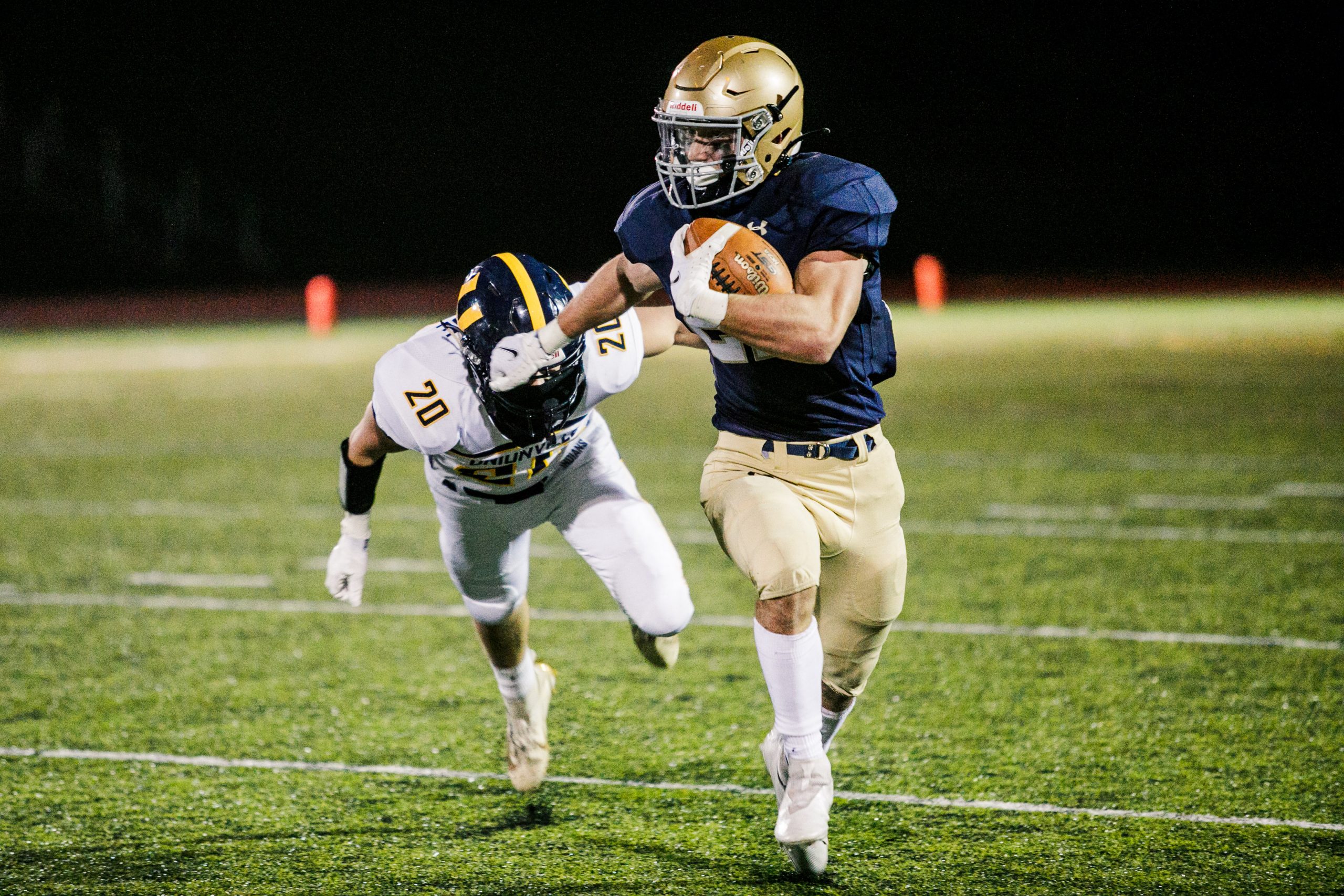 EAST WHITELAND – Not that anybody is going to rebrand West Chester Rustin’s run-heavy offense anytime soon. But on Friday in a Ches-Mont American clash, the Golden Knights proved that the forward pass is definitely in the playbook.

Rustin hit on a long scoring strike on the game’s first possession and never looked back, rolling to a dominating 42-0 road win at Great Valley. The Knights put it all together on defense and special teams, and were shockingly balanced on the attack, rolling up 175 passing yards, including a pair of lengthy scoring tosses.

When asked if he suddenly has a new AirRaid Offense, Rustin head coach Mike St. Clair laughed: “I wouldn’t go that far.

“But I might have to rethink what we’re doing on offense. We run the ball to set up the pass, and tonight (quarterback) John (Crispino) was able to hit some big passes.”

Now 2-1 overall, the Knights have put a season-opening setback to Unionville in its rearview mirror. And Ches-Mont National power Downingtown East is next.

“It was a total team effort – great special teams play, we got a shutout, and we ran the ball and threw the ball well tonight,” St. Clair said. “It was a nice win.

“We are getting ready for a huge game next week. (Downingtown East is) a top program in the state and we are just going to try to do the best we can.”

The Patriots fall to 1-2 and have been blanked in their last two outings. Rustin held Great Valley to 145 yards of total offense, including just two rushing yards (on eight carries) by top runner Michael Corrigan.

“Winning cures everything. So we have to get back to the drawing board,” said Pats head coach Jeff Martin.

“I’m not really happy with the way we played, and the coaching staff, we have to do a better job.”

The normally plodding, ground-based Rustin Wing-T offense stunned just about everybody by taking to the air on the third play from scrimmage, and junior runner Dayshawn Jacobs got behind the defense and went 69 yards on a pass from Crispino.

The Knights then delivered another quick-strike possession, with standout runner Tucker Flynn covering the final 32 yards for the score late in the opening quarter. It was 14-0 before the Patriots registered a first down.

“In thought in the first half we looked good at times, but we made too many mistakes,” Martin said. “We got behind the sticks and (Rustin) got some big plays.

“(Rustin) threw the ball. We have to be on the right page in the backend and at times we weren’t.”

Things got back to normal in the second quarter when Rustin marched 65 yards and capped it off with another Flynn touchdown to take a 21-point at the half. The senior added a third score in the second half and finished with 102 yards on the ground in 10 attempts.

The Knight broke it open with 21 unanswered points in a six-minute stretch of the third quarter, and the first two came immediately after Rustin blocked consecutive punts deep in Great Valley territory. Caelen Flynn blocked the first and teammate Isaac Fisher the second.

“You can’t play Rustin and have two punts blocked. It doesn’t really matter who you are playing, but especially against a team as good as they are,” Martin said.

“I can’t remember the last time we had one blocked punt in a game,” St. Clair chuckled. “It’s a great motivator for a unit because a lot of those kids are younger, and when they make a play like that, it gets the whole team hyped.”

Crispino and Jacobs hooked up again on a 50-yard aerial TD to wrap up the scoring. Jacobs finished with two receptions for 119 yards and added 28 rushing yards. Crispino went 4-for-6 for 127 yards.

“If we need to throw the ball, our O-line is ready. I had all day back there,” Crispino said.

“It’s something I worked on along with the receivers and the offensive line during the long off-season due to COVID-19. It’s definitely something I wanted to expand on from last season. I think we’ve been able to do that. ”

Quarterback Andy Talone paced the Patriots with 52 yards on 16 carries, but the rest of the team managed just five more yards on the ground.

“A shutout is always the goal and we got it today,” said Rustin outside linebacker Travis Riley.

“Our defensive line played strong and that allowed us as linebackers to make the tackles.

“The loss to Unionville was definitely a wake-up call for us. We under prepared and didn’t take it as seriously as we should have. As a team, we are now getting stronger, faster and more focused.”

St. Clair added: “Our defenders were schooled-up. They practiced hard, they read their keys and they played assignment football. Good things happen when you do that.”