Spring-Ford grinds past Methacton for 21-0 win 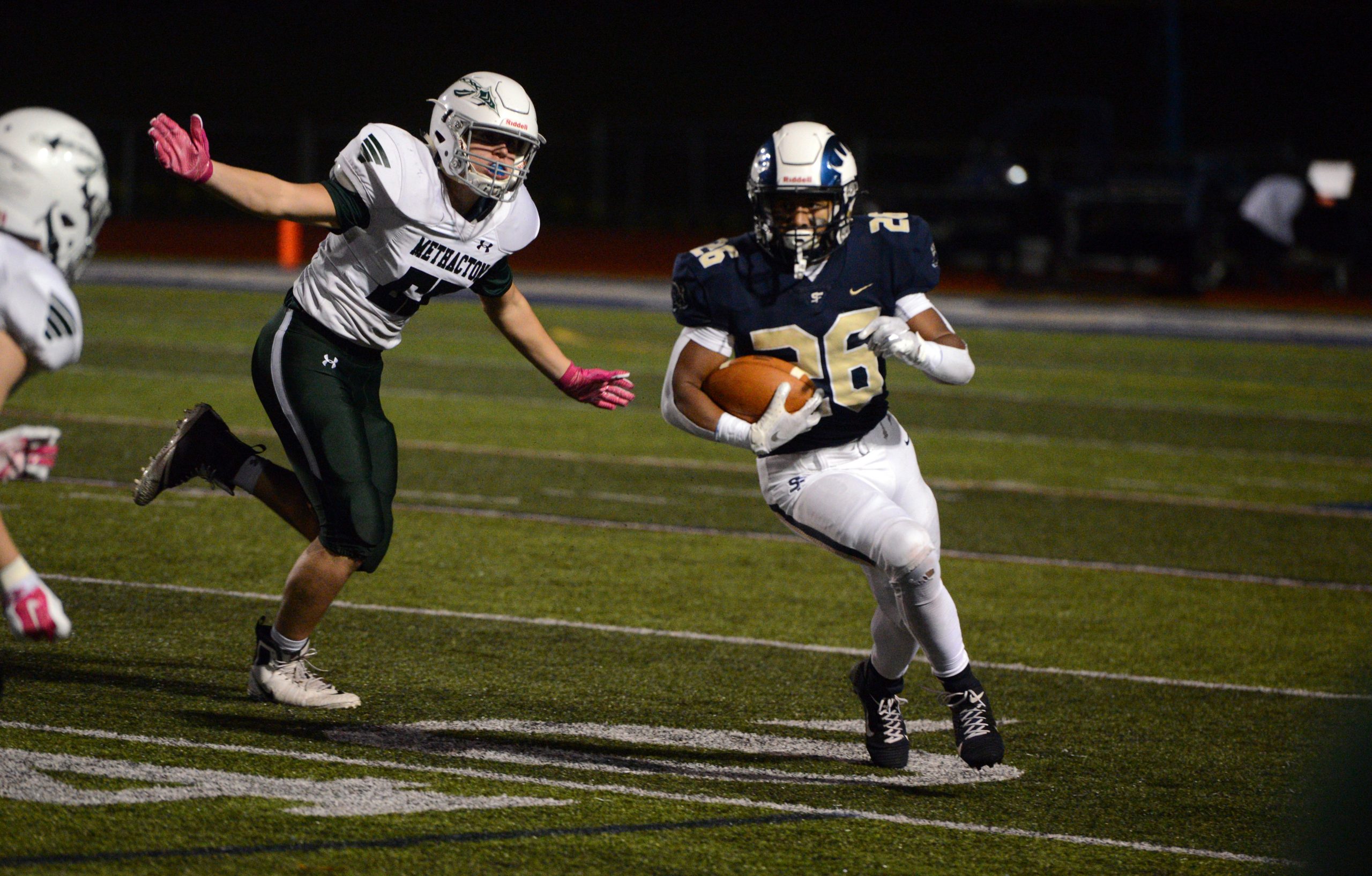 ROYERSFORD >> The Spring-Ford football team had been on cruise control to start its season.

In three straight wins to start 2020, the Rams built three-score halftime leads three straight times, including going up by 35 and 41 points, respectively, in their last two games.

Methacton gave the Rams a reminder Friday night that things aren’t always going to be that easy as the two teams went into halftime tied at nothing apiece.

While the Warriors threatened the Rams the most they’ve been this year, Spring-Ford found a way to assert itself in the final 30 minutes and stay unbeaten with a 21-0 win, clinching at least a share of the Pioneer Athletic Conference title.

Methacton’s (2-2) Justin Gumienny kept the score tied 0-0 with an interception in the final minute of the first half, but Spring-Ford’s offense controlled the ball and the clock in the second half.

The Rams (4-0) drove 74 yards in 10 plays to open up the half, capping the eight-minute touchdown drive with a Nick Teets one-yard touchdown run at the 6:42 mark in the third quarter.

They followed with a 12-play, 67-yard drive the next time they got the ball, Freed finding Josh Hellauer for a two-yard touchdown pass with 11 minutes left in the fourth before Harry Adieyefeh put the game on ice with a 39-yard touchdown run with 4:11 to play on Spring-Ford’s third drive of the second half..

For the Rams, Adieyefeh ran 19 times for 138 yards, tallying 92 of those yards in the second half, and senior Andrew Yoon ran 10 times for 62 yards, also doing most of his damage after halftime with 56 yards. Teets caught six passes for 43 yards to lead the Rams’ aerial attack.

“At halftime, a lot of the seniors on the team, we weren’t happy with the position we were in going into the second half,” Yoon said. “So we were just trying to re-energize everyone, tell everyone it’s a new half, new start, let’s just re-collect ourselves and play as a unit more.”

“We just played our game, and you can tell how the second half went,” Adieyefeh added. “Just block out the noise and just ball.”

Linebacker Jude Wozniak and defensive backs Gumienny and Sean Conner helped lead a total team effort by the Warriors’ defense, which held the Rams to their lowest point total of the season

The Warriors’ offense drove 60 yards down the near Spring-Ford goal-line on its second offensive possession, but  couldn’t come away with points after three stops by the Rams (including two tackles from Hellauer) and a field goal block. They weren’t able to string a long drive together again until a fourth-quarter drive that stalled at the Spring-Ford 27.

Merola finished 7-of-14 for 47 yards, including two passes to Gumienny for 29 yards. Carfrey ran 11 times for 48 yards and Merola added nine carriers for 25 yards.

“It’s little things,” Methacton coach Dave Lotier said. “I think we’re executing better. Hats off, they have a great defense. We had a drive at the beginning there. We just couldn’t put it in. It’s a missed block here, it’s dropped pass here, it’s an overthrow here, but we’re close. We’re so close on offense. I’m excited to see how the rest of the season goes.”

After allowing 13 points in their first two wins, Friday night’s victory was a second consecutive shutout for the Spring-Ford defense. The Rams held Methacton to five first downs and 61 total yards in the final three quarters.

Rams’ defensive back Naphtali Stine hauled in his PAC-leading third intercpetion of the season, and Zach Marinello had a sack, jarring the ball loose with a big hit on Merola.

“They don’t fail to impress ever,” Yoon said of the Spring-Ford defense. “They’re always going at them, all gas, no brakes. It’s just great to see.”

Methacton entered the game with nine consecutive losses to the Spring-Ford. The Warriors’ last win against the Rams was a 25-20 victory Sept. 25, 2010.

The recent history of the series hadn’t been kind to Methacton. In their previous five losses to the Rams, the Warriors had been outscored 297-14, including a 35-0 defeat in 2019.

The Warriors came into Friday night’s game confident as they hoped to not only snap the losing skid but tie the Rams’ atop the league standings. They didn’t accomplish the feat, but Friday’s game was another example of the strides Lotier’s team continues to make.

“We told our kids to come out and play one play at a time, one quarter at a time,” Methacton coach Dave Lotier said. “You see that we’re not backing down to anybody any more. That’s a good football program and we fought them. To their credit, they wore us down a little at the end and put a couple in, kudos to them, but I’m very proud of our guys. I love the way we fought. We’re getting better and better and we’re going to win some more football games.”

A first-half interception by Freed, in his first season starting under center, was his first of the year. He didn’t let the play linger, however, making a handful of big plays late in Friday’s win.

With his team up 7-0 late in the third quarter, Freed connected with Joe Brogan for a 21-yard pass play on a 4th-and-8 to move his team deep into Methacton territory. Five plays later he connected with Hellauer as he rolled out to his right on 4th-and-goal from the two-yard line.

“I didn’t trust him in the first half, and I have to do a better job with that,” Brubaker said. “He proved me wrong. That’s a good step in the right direction. We gotta trust each other as a group. It goes a long way.”

Nick Teets from the one-yard line. 7-0 Spring-Ford with 6:42 left in Q3. pic.twitter.com/ijgvCBUAzx

Methacton will finish its official league schedule against Perkiomen Valley next week in the Battle Axe game.

Having already clinched at least a share of the league title, the Rams face Owen J. Roberts with a chance to finish off an undefeated league mark and claim a PAC championship outright for the second season in a row.

“After tonight, I hope it’s a wake up call,” Brubaker said. “The coaching staff said throughout the week that Methacton’s an improving team and coach is doing a great job there. They were tough tonight, and they played physically.

“It’s good for us to see, I think no matter what you say as coaches, these kids are 15, 16, 17 years olds and they think they know everything. … They think they can show up and write it in, and you can’t do that any week.”

NOTES >> Yoon, Adieyefeh and Freed all praised the play of the Rams’ offensive line — Kyle Kennedy, Corey Fiore, Ryan Bethal, John Kaputa, Ian Harvie, Connor McMahon— in the second half, noting them as the reason for Spring-Ford’s three straight touchdown drives. “I think it was more of we weren’t executing as an entire offensive line (in the first half), and in the second half, we brought it together and really worked together,” Kennedy said.