Perkiomen Valley bounces back, pulls away from Upper Perkiomen, 34-0 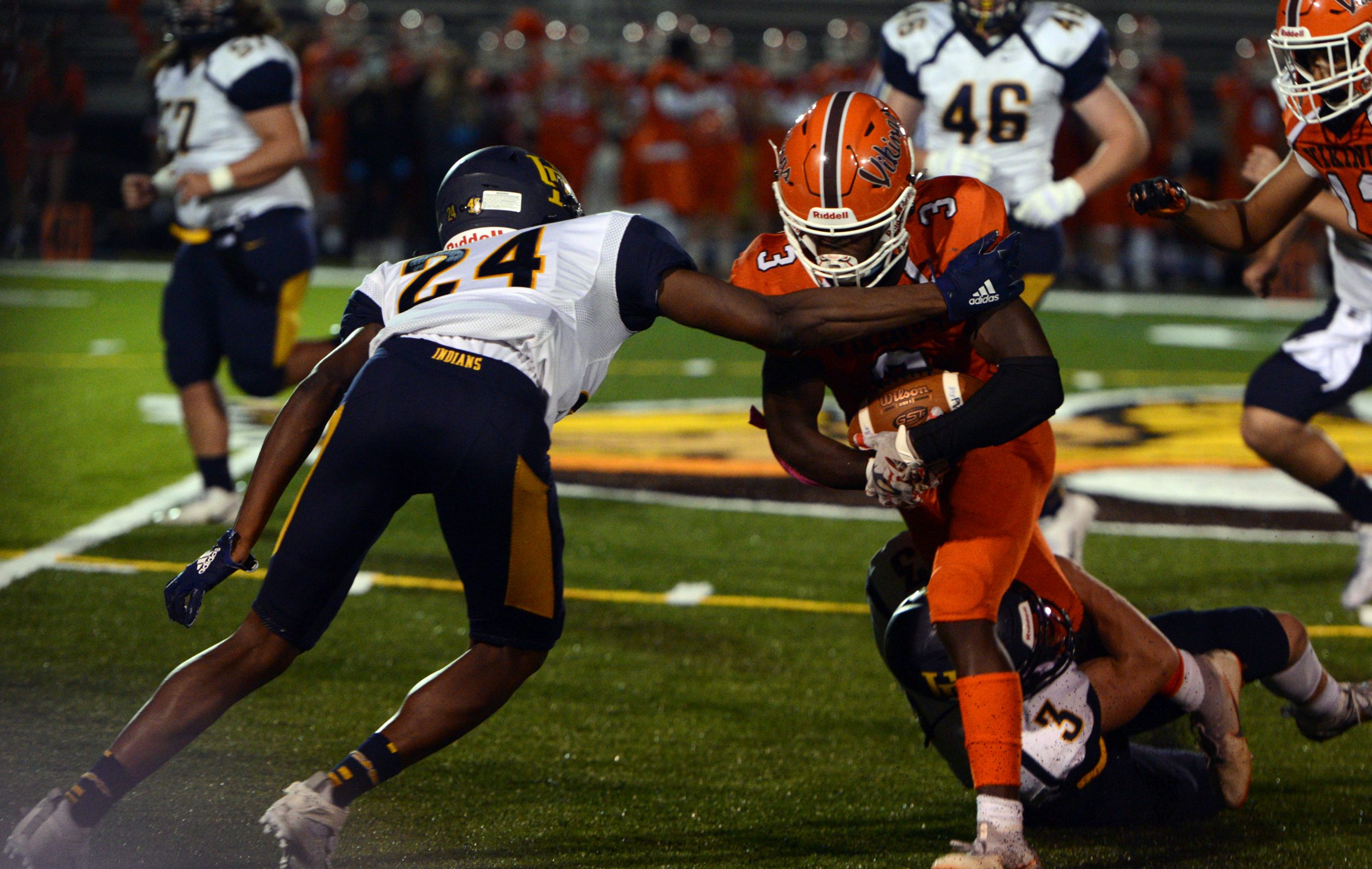 GRATERFORD >> The Perkiomen Valley football program is relying on a lot of new faces this season.

While unproven, that doesn’t mean there’s not a lot of talent on the Vikings’ roster as displayed by a 34-0 victory over Upper Perkiomen on Friday night at Thomas J. Keenan Stadium to prevent its first 0-2 start since 2004.

Junior quarterback Ethan Kohler, the veteran of the squad, completed 19-of-22 passes for 212 yards and four touchdowns and sophomore running back Rasheem Grayson tallied 154 total yards and a score, while the Vikings’ defense pitched its fourth shutout in five years.

“I think the first game against Spring-Ford it really showed our inexperience, but after that I feel like we’re playing football,” said senior defensive back Aidan Owens, who picked off a pass in Friday’s win. “We’re playing football. It’s football. Kids are going to get into their role. Kids are going to have to do what they have to do and that’s what we did tonight.”

.@pv_vikingfb QB Ethan Kohler completed 19-of-22 passed for 212 yards and 4 TDs as the Vikings debuted their new turf field with a 34-0 win over Upper Perk. pic.twitter.com/L1mteXTOUm

Along with giving PV a chance to bounce back from an opening weekend loss to Spring-Ford, Friday’s win also marked the Vikings’ first game on their recently installed turf field.

“It was so awesome,” PV head coach Rob Heist. “I’m happy for our community and our district and our program. I feel like PV and the people who come and support us every Friday night deserve a facility like this. It’s beautiful and hopefully we’re going to get to play on it for a very long, long time.”

While Perk Valley’s offense moved the ball early, the Vikings couldn’t put the ball in the end zone until Kohler found Dawson Debebe for an 18-yard score with 8:23 to go in the first half.

After nearly muffing a punt and giving the Indians a chance to tie or take the lead, the Vikings went up 13-0 with 11 seconds left in the first half when Kohler connected with senior wideout Kevin Beattie for a 20-yard touchdown pass.

The momentum shift continued at the start of the second half when PV marched 71 yards in nine plays on the opening possession, capping the drive with a six-yard touchdown run by Grayson.

“The touchdown at the end of the half was really a momentum shift for us,” Kohler said. “We were only up 6-0 and going up two scores is a big advantage and we knew that we got the ball after the end of the first half. In the locker room we were talking. ‘If we score out of halftime, we have this game away.’”

Ethan Kohler to Mason Thompson on the bootleg from five yards out. 34-0 PV with 1:16 left in Q3. … That’s four TDs for Kohler. pic.twitter.com/lbqnul5KFk

“The momentum from the second quarter completely carried over,” he added “We got over the hump that last drive of the first half, so then as soon as that happened we just carried that all the way through the second half and played great.”

After winning the yardage battle 67-50 in the first quarter, Upper Perk finished the game outgained 455-180 by the Vikings. The Indians best shot at points came on a second-quarter field goal attempt set up by a 47-yard completion from senior Hunter Flack to junior Logan Simmon.

Flack completed 8-of-17 passes for 96 yards. Simmon caught five passes for 57 yards and added another 22 yards rushing, and Malachi Duka chipped in a team-high 48 yards on the ground. Trey Robinson added two catches for 20 yards and Corey Jackson added a 19-yard grab to round out the Upper Perk offensive leaders

“We wanted to win. We played like a team and played together like a brotherhood,” the senior Jackson said of his team’s effort. “That’s all I can ask from them.”

“(PV) took momentum over (after halftime) and we have some mistakes we gotta clean up for next week, but that’s all about practice,” he added.

Grayson led the Vikings on the ground with 11 attempts for 86 yards. Fellow sophomore Leo Hunsberger ran 12 times for 69 yards.

“We spread the ball around perfectly,” Kohler said. “We have talent and speed and once they get going and they get confident, they can do anything. And the o-line blocked great all night. They were getting a good push up front. And when they pave the path those guys can run and find the holes great.”

Digging Deep >> Jackson said he and his teammates are excited about the challenge of facing some the league’s bigger schools this season. Upper Perk hadn’t played PV since 2015 before Friday night.

Though the Indians have the smallest roster in the PAC, they’ve shown through two games not to be intimated by the Liberty Division schools they’ll face in this reconfigured season.

Laying the Boom >> One of the signatures of the Vikings’ defense over the years has been a pride in tackling. That was the case Friday as the feisty Vikings’ defense laid a few good licks on the Indians.

“Hitting hard is a staple of Coach (Matt) Young’s defense,” Owens said. “Coach (Don) Lindberger teaches it. It gets everyone hype and our defense loves it.