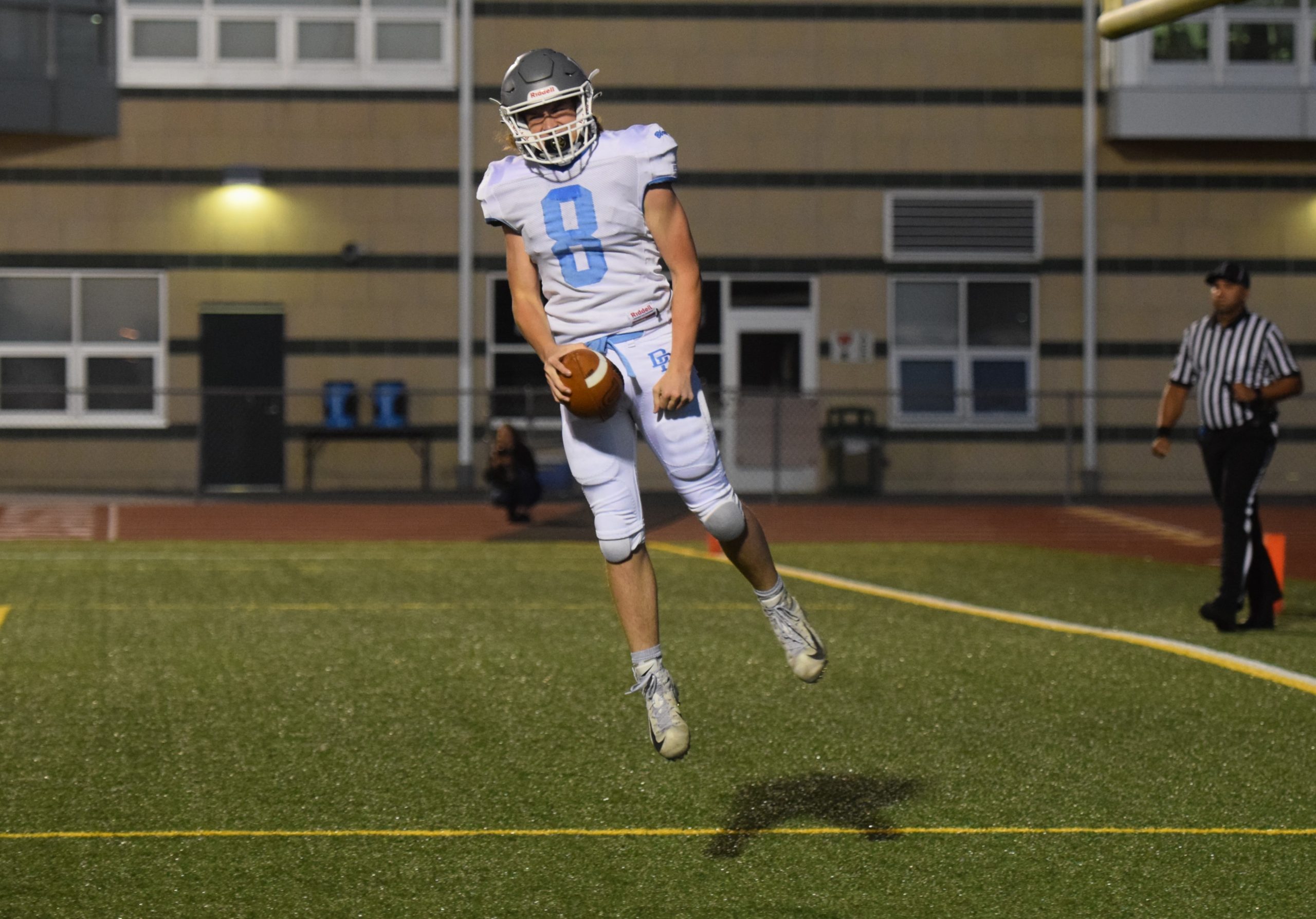 GEIGERTOWN >> It’s not an exact match for the “Philly Special.”

But like the razzle-dazzle pass play that helped the Philadelphia Eagles defeat the New England Patriots in Super Bowl LII (2018), Daniel Boone’s “special” — and the successful execution of it — was vital to the Blazers prevailing over Twin Valley Friday, 43-42.

That time came with five seconds left and Boone trailing Twin Valley, 42-41, after quarterback Carter Speyerer hooked up with Alex Vassallo on a 17-yard touchdown pass. Having seen the Raiders work their way back from a 28-14 halftime deficit to score 21 unanswered points, and take their first lead with little more than two minutes left, the Blazers were looking to insure their early point-scoring prowess didn’t go for naught.

Philly Special for the win!!! Daniel Boone TD to vassallo, they go for 2 and Speyerer catches winning 2 pt for 43-42 @DBooneBlazers lead, :5 left pic.twitter.com/z58jyRFJwL

The two-point conversion play saw Speyerer take the snap and hand off to slot back Cam Hirshman running left to right. Hirshman then handed the ball to Krystian Hornberger, running right to left, and Hornberger threw to Speyerer, undefended and making a beeline for the end zone’s left corner.

“It’s a great play,” Speyerer said. “We practiced it in my backyard. This was the very first time we did it.”

The tenuous lead still had to hold up the final five seconds and one more Raider possession. The hosts covered a muffed kickoff at their 25-yard line, but a final pass attempt by TV quarterback Ryan Scheivert fell incomplete, setting off Boone’s joyous celebration.

“This was a nail-biter … one of the craziest games I’ve ever seen,” Speyerer said. “It wasn’t a matter of how we started, but how we finished. We said that in the locker room.”

Speyerer then made a two-yard push up the middle at the 35-second mark, and Millard added the conversion kick for a 10-0 first-quarter advantage.

After another stop of the Raiders, Boone got seven more points when Speyerer and Vassallo collaborated on a 20-yard scoring pass. Its 18-point second quarter surge continued with Hirshman returning a kickoff 77 yards for a score, and A.J. Hofer highlighting his 170-yard plus rushing night with a two-yard TD run in the final minute of the first half.

Twin Valley wide receiver Trey Freeman sheds a tackle and runs in for a touchdown in the second quarter against Daniel Boone. (Austin Hertzog – MediaNews Group)

The Raiders’ offense got untracked with Scheivert throwing a 28-yard touchdown pass to Trey Freeman and making a 46-yard run around his left end into another TD. Freeman later went on another end-around jaunt — this one covering eight yards — with less than two minutes to go in the third quarter, and came out on the receiving end of a 46-yard TD pass by Scheivert at the 6:53 mark of the fourth, bringing TV back to a 28-28 tie.

“Twin Valley is well-coached,” Flowers noted. “They made adjustments at the half and were able to capitalize on them.”

Jacob Simmet’s recovery of a Blazer fumble at the Boone 42 set the stage for the Raiders to gain their first lead of the game. It came when Dominic

Caruso went one yard through right guard four plays later and Matt Puccino kicked the extra point for a 35-28 advantage with little more than two minutes to go. Daniel Boone’s Alex Vassallo catches a fade in the corner of the end zone against tight coverage for a touchdown against Twin Valley. (Austin Hertzog – MediaNews Group)

Speyerer and Hornberger revived the Blazers’ flagging spirits by teaming up on a 43-yard TD pass. The 35-35 deadlock was erased seven plays after the subsequent kickoff, Caruso putting TV up 42-35 with a five-yard burst up with middle at the 16-second mark.

Starting from the Raider 45, Speyerer and Vassallo staged a prelude to their final TD connection. They covered 13 yards on a pass, then got an additional 15 yards when TV was called for a roughing-the-passer penalty with 10 seconds left.

“We did what we did to get the job done,” Speyerer noted. “We know how to come back and not let up.”

Looking back at his team’s lid-lifter to the 2020 season, Flowers saw a mixed bag of performance.

“Mentally, we’re able to handle things,” he said. “Physically, we’ve got to get better. There are some things we need to clean up.”

NOTES >> On the defensive side for Boone, Jake Myers distinguished himself by intercepting a Scheivert pass attempt to close out the first half. … Twin Valley recognized its senior gridders and cheerleaders prior to the game. … Along with his field goal, Millard had two conversion kicks for the Blazers.