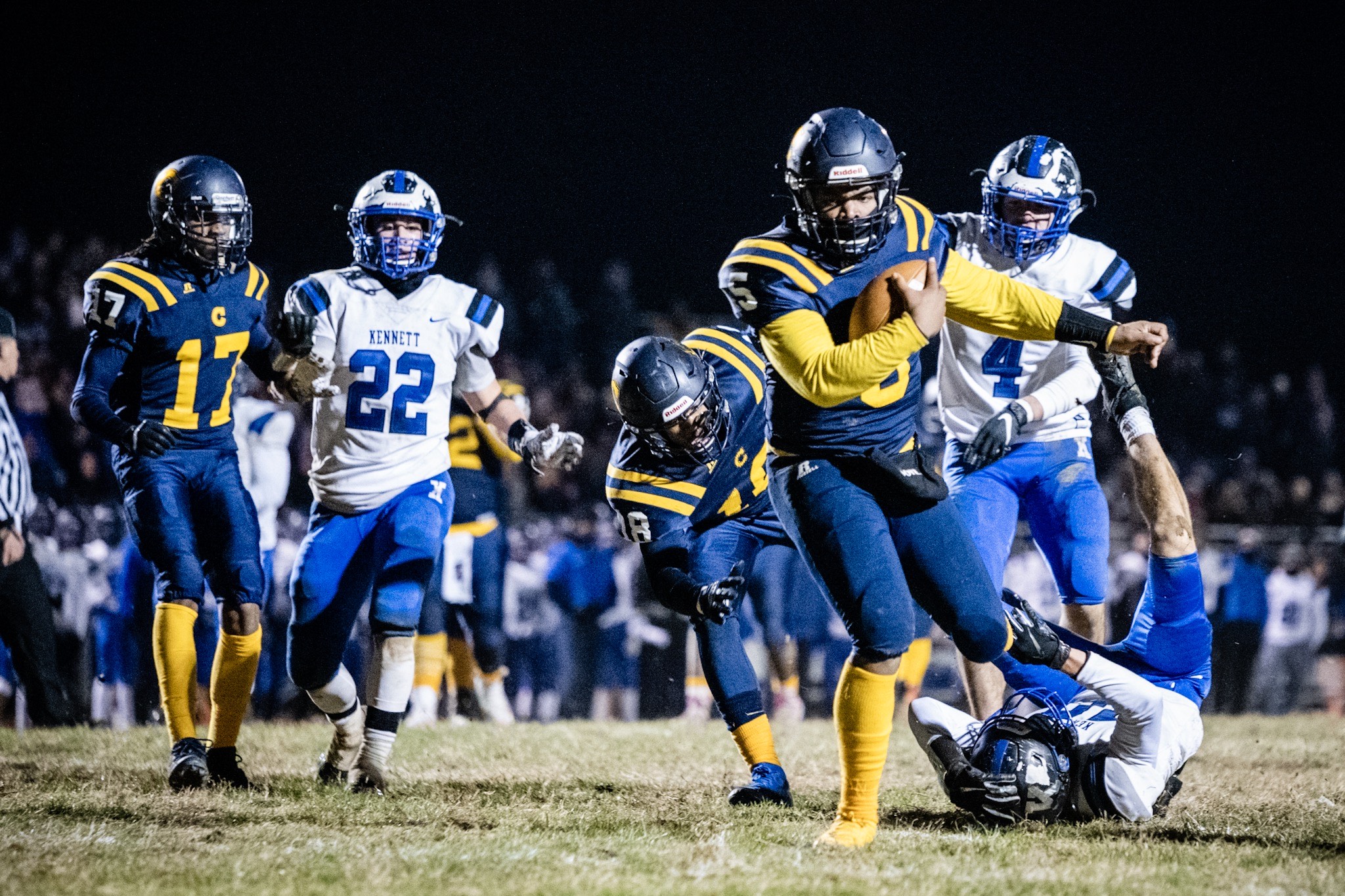 Cheltenham’s Adonis Hunter (5) runs in for his third touchdown of the game against Kennett during their District 1-5A semifinal on Friday, Nov. 15, 2019. (James Beaver/For MediaNews Group)

When the sports world came to a halt in March, every athlete felt the effects in some way.

The spread of the COVID-19 virus put a halt to competitions and at the high school and college levels, the end of winter and spring seasons but for athletes recovering or rehabbing an injury, the process didn’t stop. With new restrictions in place however, the path back to a clean bill of health got quite a bit more difficult.

It’s a challenge, but one that hasn’t slowed down the numerous area athletes on the road to recovery.

“It’s a pull, I don’t have to do it but I get up because I want to do it,” Upper Dublin senior Mike Slivka said. “With quarantine, you can be lazy, you can sit around and do nothing if you want to but the motivation for me to continue to work out is to come out of it better than I was before. What keeps me going is these workouts, they’re what keep me on task.”

Slivka, the Cardinals’ quarterback, is in the late stages of rehabbing a torn ACL he suffered early in the football season. The Colgate recruit had surgery to repair his knee in October and had been progressing well when the coronavirus altered the schedule.

While Slivka has been undergoing physical therapy with NovaCare, he’s been doing most of the work on his own at home. The senior, who was just fitted for his brace this week, said  he Facetimes with his therapist to go over exercises but it’s up to him to get them done.

“I think it’s been able to help me speed things up,” Slivka said. “I don’t have any other distractions so my main focus for the day is to work out and do my physical therapy so I think there’s a chance I may actually be cleared sooner. When I last saw my doctor, he said I could be cleared in June when originally, I wasn’t sure if I’d be ready for the season or not.”

While Slivka is at a later stage of his recovery, Kutztown senior Karen Lapkiewicz was just getting started when social distancing and stay-at-home orders went into effect. Lapkiewicz, a St. Basil Academy graduate and Southampton resident, had torn her ACL and dislocated her left knee with just five games left in the Golden Bears’ regular season.

Her surgery, which took place on March 6, came a week before quarantine measures started and left the guard almost on her own. With rehab facilities either closed outright or extremely limited in how they could schedule appointments, Lapkiewicz leaned on a different method to start her road back.

“There was only a three week difference from when I tore it to when I had surgery and every day between then, my trainer Holly (Biggs) and I worked on my leg,” Lapkiewicz said. “I only needed to take three classes to graduate so I had a lot of time.

“When I did have the surgery, with the virus hitting, I couldn’t go to PT so thankfully I had Holly because she already showed me a lot of execises I could do and has stayed in contact with me. I can’t thank her enough for that.”

Now 10 weeks post-op, Lapkiewicz said her next major step will come in two weeks when she’s slated to begin running. With physical therapy facilities limited on the number of cases they can take on under the shutdown, Lapkiewicz said she’s likely going to wait on finding one until she starts running again.

In the meantime, along with graduating from Kutztown, Lapkiewicz has been making do at home.

“I feel like I’m at a good point thankfully because I was taught a lot of things beforehand,” Lapkiewicz said. “I make time for it because when quarantine is over, I want to be out walking and running and I’m preparing myself for the excitement of the end of quarantine.

Plymouth Whitemarsh junior Max Leszczynski has become all too familiar with the struggle to run. A three-sport athlete at PW, Leszczynski tore her ACL in November during a lacrosse camp but had to wait a few weeks for swelling to subside before she could have it repaired.

Leszczynski, who opted to go with a different method of repair with long-term strength in mind, was starting to get back up to speed when she hit a proverbial wall. Finding a place to run so she could start building up strength in her leg proved problematic.

“It was interesting because every time I would go to a track, I would get kicked off,” Leszczynski said. “I had to get pretty creative with where and how I was running, I would go to parks or trails because I was getting kicked out of all the stadiums. My PT also shut down because it was considered non-essential so I wasn’t able to go there for six weeks. I had workouts to do at home but it’s not the same as being there with my physical therapist and all the machines they have there.”

Adonis Hunter, Cheltenham’s senior quarterback, saw his recovery from a torn MCL turn into a hassle the past few weeks. Initially, Hunter didn’t even know he had been injured but a fluke play on the final drive of the PIAA 5A title game had resulted in a torn MCL that ended up needing surgical repair.

Once quarantine measures took hold, getting into see his physical therapist turned more stressful than trying to elude an opposing pass rush. Balancing schoolwork and a part-time job with PT visits only got tougher under the new guidelines.

“I was about 80 percent and now I’m about 90 percent but it’s definitely been difficult,” Hunter said. “Some days I’m scheduled to go to physical therapy, I can’t because they’re only allowed to have so many people in at one time. That messed me up because when I work, it’s 7-2 and the office closes at five so there’s only that three-hour window.”

Hunter, who has committed to play at East Stroudsburg, said he’s been able to fit in every session he was required to but it took a lot of rescheduling and adjusting his schedule. While he’s been getting at-home workouts to do every week, Hunter still needs to go into the office at Moss Rehab in Jenkintown to access weights and machines he needs for his rehab.

“You can’t even walk into the building until your temperature is checked and you have to have your mask on at all times,” Hunter said. “The therapists have gloves on and every time you use a machine, somebody is coming and wiping it down.

“It’s slowed down the process of where I want to be, but at the same time, everyone’s going through the same thing so it’s not just me.”

Then, eight weeks through his 10-week program, Hunter had to adjust to another change.

“The therapist I had for eight weeks got laid off, the place I’m at had to lay off a bunch of people so I’ve been working with a new one,” Hunter said. “It was tough adjusting because my first therapist really knew my knee.”

Slivka, who is rehabbing through NovaCare, hasn’t been into the office since the state-ordered shutdown but has been in contact with his therapist over the phone. With school closed, the UD senior said he’s poured most of his energy into his rehab efforts and noted he’s lucky to have weights and other equipment at home he can use.

Self-motivation is a critical component of any recovery and none of the athletes interviewed for this story wanted to fall behind in their individual processes.

While her career at Kutztown came to a close in March, Lapkiewicz has plenty of drive to push herself to get back. After leaving St. Basil, the guard walked on to the Golden Bears’ roster then became a starter and invaluable player who did whatever the coaching staff asked.

She also wants to keep playing and nearly gave her surgeon a panic attack when making those plans known.

“Right before I got my surgery, I told my surgeon I want to be able to play in the summer league that’s in my area,” Lapkiewicz said. “He thought I meant this summer and was almost having a panic attack so I told him I meant for next summer. I want to be back to my usual active self.

“It is tough, but I thank basketball for that. It’s hard for me to work out by myself but playing basketball gave me self-motivation to push myself a little bit more.”

Leszczynski, who was PW’s top goal-scorer last season in soccer and also plays basketball in addition to lacrosse, plans to be ready if there is a fall season next school year. While she hasn’t let locked-up tracks and changes to her visits with Dresher Physical Therapy stop her, the PW junior did admit she was worried the effects of the pandemic would hinder her recovery.

Instead, thanks to the efforts of her therapists, she’s right on time and awaiting the arrival of her brace to ramp things up even more.

“I was definitely worried, it was a stressful experience with my family making sure I wasn’t progressing backwards,” Leszczynski said. “Once I got back to PT, I was pleasantly surprised I was still on the same timeline and hopefully able to get back to sports in July.”