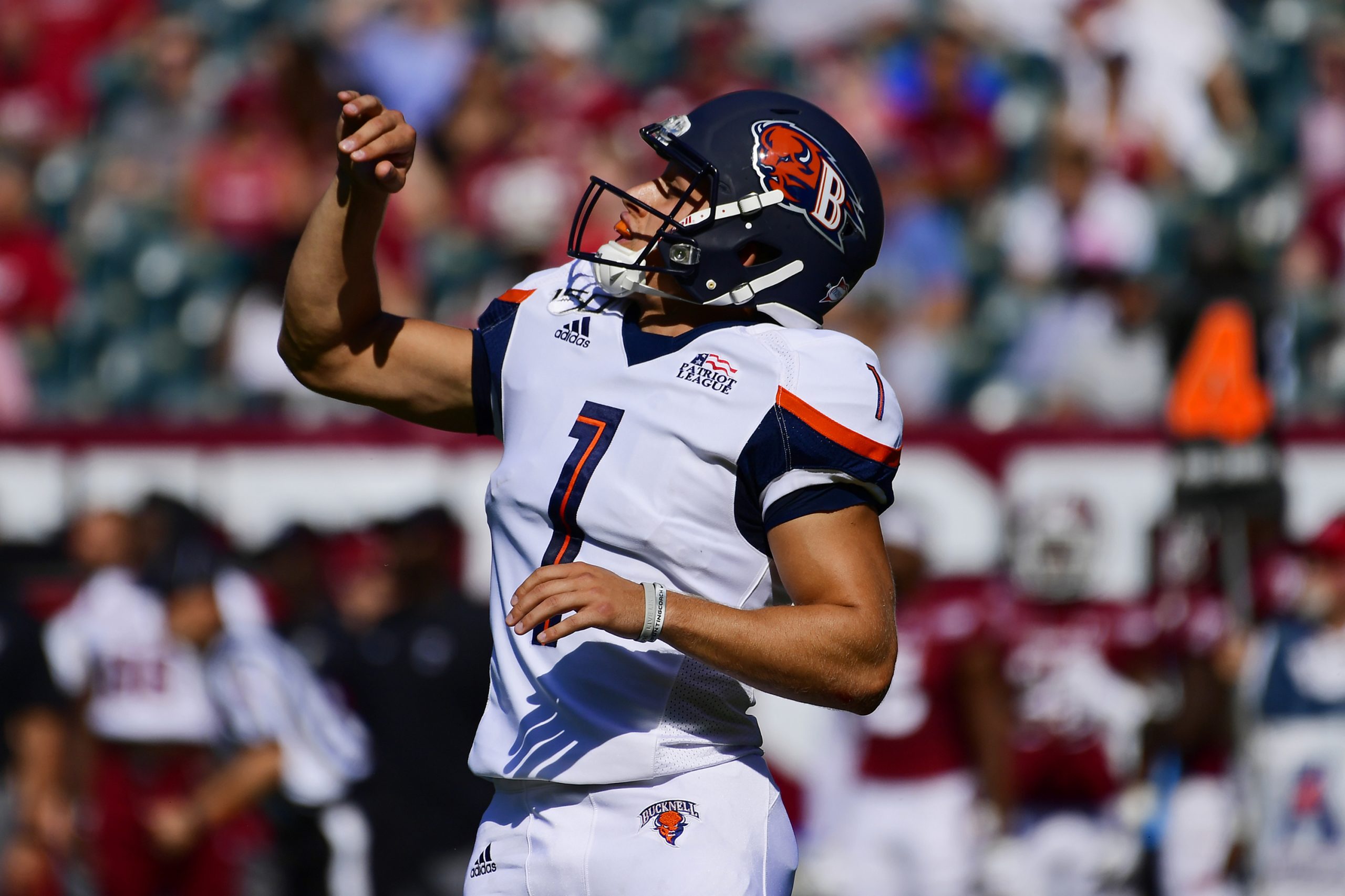 EAST MARLBOROUGH >> Alex Pechin knows that it all sounds a bit contrived. But when talking about his ascent from Unionville High School into one of the nation’s premier college punters, the term fate seems to come up regularly.

“There have been a lot of things that have happened,” he acknowledged. “I’ve talked about it a lot with my parents a lot — that there seems to be fate involved.”

It’s easy to understand when you consider that in 2015 Pechin had just one college offer — to Bucknell as a punter/kicker — and he is exiting as one of the program’s most honored football players.

“Alex has made every All-American team you can imagine, he’s set numerous school records and going to the NFL Combine,” said Unionville head football coach Pat Clark. “And it couldn’t happen to a better person.”

There was also an injury that ended his sophomore season, which led to a redshirt season, but wound up becoming a blessing in disguise.

“My time at Bucknell has been pretty been unbelievable, in every way,” Pechin said.

One of 337 college players to get a coveted invite to the NFL Combine later this month in Indianapolis, Pechin is one of just 12 from the NCAA Division I Football Championship Subdivision, and the only FCS punter. He learned of the opportunity via email while alone in his car at a stoplight.

“He is a young man that everybody at Unionville roots for,” Clark said. “So how awesome would it be to see him have a shot in the NFL?”

That shot is at hand. And if it happens, the 23-year-old from Kennett Square will be the first from Unionville. Former stars like Tom Pancoast (Penn State) and Richie Sampson (Coastal Carolina) have been invited to an NFL camp, but it ended there.

The second son of parents Michael and Jacquelyn, Pechin was a three-sport standout for the Indians from 2011-15. He was a multi-year starter in basketball, and an All-Ches-Mont pick as an outfielder in baseball and as a quarterback in football in addition to kicker.

“He was, by far, the best athlete in his class at Unionville,” Clark said. “He was the kind of kid that everybody rallied behind in every sport he played.

“And as elite as Alex has become as an athlete, he’s always been elite as a person.”

Not quite 6-foot and nowhere near 200 pounds, Pechin was Unionville’s varsity punter for three years, and the starting quarterback and kicker for two. As a senior, he threw for over 1,400 yards, averaged 41.8 yards per punt and booted eight field goals.

“He was also the best player on the basketball team and an elite baseball player,” Clark pointed out. “He just narrowed down his athletic focus. He could have been successful in college in any of those sports.”

With a hard-nosed style, he played hoops like he was 6-8 power forward. But he was just 5-11. In the summer before his senior season, Pechin attended football and baseball camps and played summer league baseball in addition to football workouts.

“Coming out of high school, I didn’t know what I was going to do,” he admitted. “I had been playing football and baseball all of my life.

“I kicked and punted in high school because it just came naturally to me. I never went to a camp, so that everything that I knew was just me messing around with it, talking to my dad or my teammate and best friend Andrew Jones.

“We would go out in pre-practice and (Andrew) would say, ‘why don’t you try this.’ That’s how it started, just messing around and seeing what worked and what didn’t.”

A BLESSING IN DISGUISE

Pechin received some initial college recruiting attention in football and baseball, but at some point it all ended.

“Something happened and in the snap of a finger there was no communication,” he recalled.

Not long after, however, Bucknell emerged out of the midst, looking for a kicker/punter.

“Thank God for Bucknell,” Pechin said. “It was my only offer for football. It was for kicking and punting. I love doing it so I decided to make the most of it.

Before showing up in Lewisburg in the summer of 2015, Pechin turned his total attention to special teams.

“I thought that I should probably get into this a little more in depth,” he said. “I was really late to the game, and that probably played a role in where I ended up. But it’s turned out very well for me.

“When I was leaving high school, if you told me I was headed to the (NFL) Combine, I would say, ‘no way.’”

In the fall of his freshman season, Pechin burst on the scene to average 42.1 yards per punt, which shattered the school record. He was later named to the All-Patriot League first team.

But two games into his sophomore season, Pechin suffered a quad injury and missed the next two months. He was actually cleared to play at the tail end of the season, but Bison head coach Joe Susan decided against it.

It was another career-defining decision. The following season, Pechin continued the upward trajectory, earning first team All-League recognition, third team All-American honors and was the Patriot League’s Scholar-Athlete of the Year. In 2018, he was named to several All-American teams.

“The injury was another thing where you think about fate,” he said. “It was very difficult to go through, but looking back it was kind of a blessing in disguise.

“I remember my parents telling me that, and I was like, ‘how in the heck can this turn out well for me?’ But it honestly did. It gave me an extra year to keep practicing and improve my craft.”

Everything then came together for his redshirt senior season last fall. Pechin set the league record by averaging 47.3 yards per punt, which ranked seventh overall in FCS history. He was just the fourth football player in Bucknell history to be named all-league four times and became the 14th Patriot League player to earn consensus All-American accolades.

“I knew Alex was going to be really good at kicking and punting, and once he decided to go that direction, he’s such a hard worker and so thorough in everything he does, I can’t say I am surprised he’s had this much success,” Clark said.

Clark also wasn’t surprised to see that Pechin was a two-time team captain with the Bison. But in a strange twist, Pechin himself finds it hard to believe.

“I mean, who is going to listen to the punter?” he laughed.

“It’s an incredible honor being elected twice by my teammates.”

It’s important to note that Pechin has actually been working on his leadership skills for the last decade. He starts with building relationships with teammates, especially the newcomers.

“I learned that lesson in high school,” he explained. “When I was a sophomore and my brother Brad was a senior, all of his friends treated me so well that it made a difference in my confidence.

“I decided to do that when I was an upperclassman. Even now I am close with a bunch of freshmen and they are three-quarters my age.”

In mid-January, Pechin competed in the 2020 East-West Shrine Bowl, and is now prepping for the Combine, which goes from Feb. 24-March 1. He is one of seven punters in the nation to get an invite.

“I actually feel like I still have a lot of room to grow,” Pechin said. “I’m excited to see where it takes me.”

He will graduate in May with a dual degree in biomedical engineering and management for engineering. But for now, Pechin is putting a job in the real work on hold.

“I am 100 percent all-in for football,” he said. “I’m going to give it a shot for a substantial amount of time. You get one shot when you’re young and if that’s your dream you have to go for it.

“I haven’t applied for jobs, unlike a lot of my friends. But I know that even if I play professionally for 20 years, I am eventually going to have to work someday in the real world.”