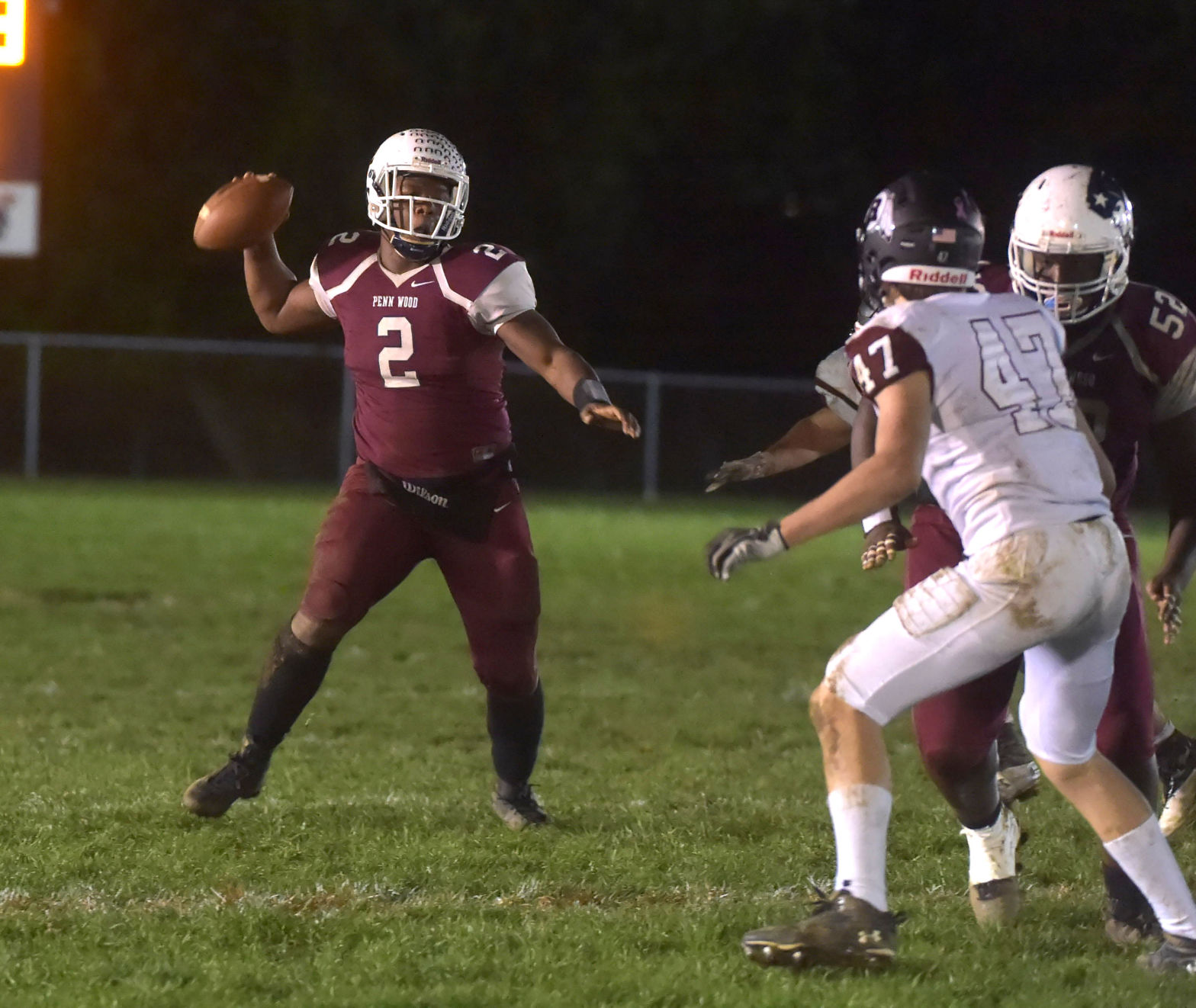 In addition to Daily Times Player of the Year Trey Blair of Haverford, the rest of the All-Delco offense includes:

Desman Johnson, Penn Wood: One year after shattering the county’s single-season passing record, the senior set the career mark in 2019 on the way to becoming the first 7,000-yard passer in county history. The two-time All-Delco finished his historic career with 7,588 yards and 77 touchdown passes while leading the Patriots to three straight Del Val League titles. In his senior campaign, Johnson led all Delco passers with 2,125 yards. He threw for 17 touchdowns and ran for nearly 500 yards with 11 TDs as the Patriots advanced to the quarterfinal round of the District 1 Class 5A playoffs.

Strath Haven’s John Prochniak, left, ran for 1,257 yards and 17 touchdowns, the most among Delco running backs this season, as well as starring on the defensive side of the ball. (Pete Bannan/MediaNews Group)

Jake Morin, Garnet Valley: The senior running back/linebacker was the Jaguars’ MVP in 2019. He emerged in a crowded field of capable ball carriers midway through the year, amassing 570 yards and 10 touchdowns over the final six games, including a 129-yard, four-TD performance in a 43-0 rout of Owen J. Roberts in the opening round of the District 1 Class 6A playoffs. Morin’s outstanding play on both sides of the ball helped the Jags advance to the final four of the district tourney for a fourth consecutive season. On defense, Morin led all GV players in tackles (79), tackles for loss (12.5), forced fumbles (two) and QB hurries (nine). A standout lacrosse player, Morin will play the sport next year at Penn State.

John Prochniak, Strath Haven: The senior running back/linebacker was the backbone of a Panthers team that finished 9-3 and advanced to the second round of the District 1 Class 5A playoffs. The leading rusher in Delco among RBs, Prochniak finished third in the county in rushing yards (1,257) and touchdown runs (17). He amassed a career-high 187 yards and three scores in the Panthers’ signature win of the season, a 49-13 trouncing of Ridley. As a middle linebacker, Prochniak racked up 109 tackles, 3.5 sacks, one caused fumble and an interception, leading the way for a defense that posted five shutouts.

Malik Langley, Chester: The senior athlete and his twin brother, Malachi, were instrumental to the Clippers’ success this season. The Langleys were all-purpose weapons and put forth similar all-around production on a weekly basis. As a wide receiver, Malik Langley averaged better than 18 yards per catch with six touchdowns. He accrued more than 1,000 all-purpose yards with 12 touchdowns, including two kick returns and one punt return. Langley also excelled in the defensive secondary, logging two interceptions, one fumble recovery and one pass defense. He recently received an offer from Morgan State.

Jahmir Dixon, Radnor: The junior had the best season of any wide receiver in the county, leading all players in receptions (44), yards (902) and touchdowns (13). The diminutive Dixon was the most explosive offensive performer on a team that finished 5-6 and qualified for the District 1 Class 5A tournament. Dixon broke the school’s single-game record with 210 receiving yards in a 28-7 win over Conestoga.

Xavier Newman, Academy Park: The 6-3, 260-pound senior lineman was a stalwart on both sides of the ball for the Knights, who advanced to the District 1 Class 5A final and captured a share of the Del Val League title. With Newman in the trenches and dominating from the guard position, the Knights averaged 27.9 points and 199.0 rushing yards per game. Newman’s outstanding year resulted in All-Del Val honors for a second straight season. As a run-stuffing defensive tackle, Newman registered 30 tackles.

Jason Lafontano, Archbishop Carroll: The senior guard played with a physical, bruising style, which helped him become one of the top two-way linemen in the Catholic League. Said coach Kyle Detweiler: “Most plays ended with him being on top of a defensive lineman on the ground.” Thanks in part to Lafontano’s strength at the line of scrimmage, the Patriots finished with a winning record for the first time since 2007. LaFontano earned All-Catholic League first team honors.

Barry Brown breaks loose for a touchdown in the District 1 Class 5A final against Cheltenham. The Academy Park senior was second in Delco this season in both rushing yards (1,373) and quarterback rating (161.03). (Pete Bannan/MediaNews Group)

Lance Schwartz, Garnet Valley: The 6-3, 280-pound senior was an intimidating force for the Jaguars. Schwartz is among a long list of great offensive lineman at Garnet Valley. Schwartz paved the way for a Jaguars run offense that produced a county-leading 330 yards per game. He was instrumental in helping the Jaguars break the team record for most points scored in a season (574). After helping the Jags capture a second straight title, Schwartz was selected to the All-Central League first team.

Kevin Gillespie, Haverford: The 6-2, 235-pound senior was one of the most versatile linemen in the county. He was the Fords’ top performer on both the offensive and defensive lines. In addition to opening plenty of running room for quarterback Trey Blair and running back Chasen Wint, Gillespie flourished as a defensive and, racking up 56 tackles and 11.5 sacks for a Haverford team that won in the district playoffs for the first time in school history.

Barry Brown, Academy Park: The senior quarterback was the heart and soul of a Knights team that fell one two-point conversion short of winning the District 1 Class 5A title. In that heartbreaking 43-42 loss to Cheltenham, Brown ran for 225 yards and three TDs while passing for a pair of scores. He was the second-leading rusher in Delco with 1,373 yards and 17 TDs. Brown’s quarterback rating of 161.03 was good for second in the county, as he passed for 1,714 yards and 19 TDs. Brown is a 2019 Mini Maxwell Award recipient.

Chris Clark, Haverford School: The senior kicker earned All-Inter-Ac League honors and made Delaware County history when he drilled a 50-yard field goal in a win over Malvern Prep. He is one onlyba handful of kickers to hit from 50 yards or beyod, and the first since Haverford School All-Delco Jack Soslow (52 yards). Clark was 34-for-36 on point-after attempts and connected on nine field goals, including a pair of 48 yarders.