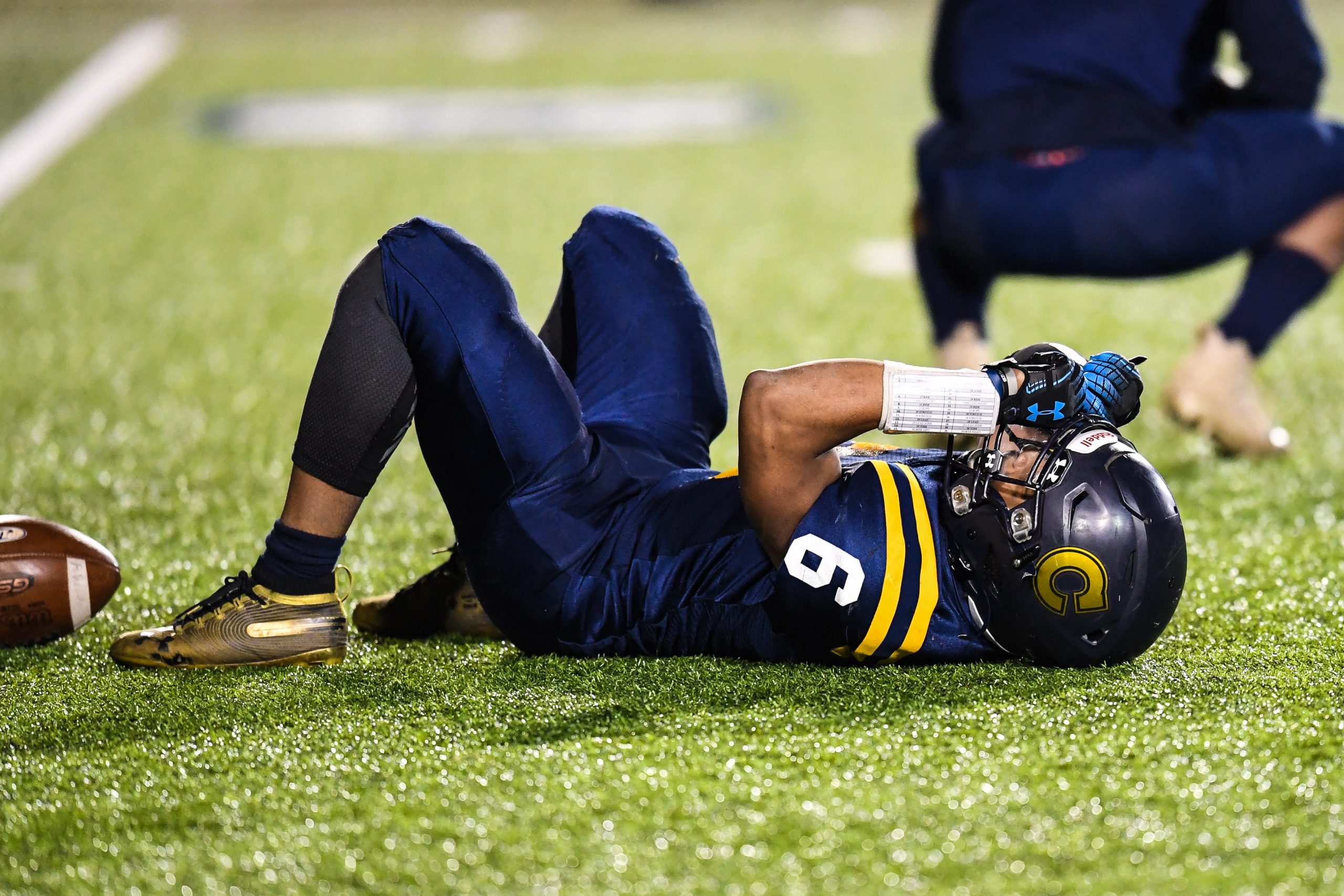 Cheltenham's Nate Edwards (6) lays on the ground after the final seconds tick off the clock during the PIAA Class 5A Championship at Hersheypark Stadium in Hershey on Friday, Dec. 6, 2019. Cheltenham lost 19-15 to Archbishop Wood. (Mark Palczewski/For MediaNews Group)

HERSHEY >> It looked as if the Cheltenham football team was close to completing a storybook season.

But on the final page came a cruel twist for the Panthers.

Trailing 12-0 in the second half, Cheltenham rallied to take a 15-12 lead on Archbishop Wood with four minutes remaining in the PIAA Class 5A championship. But needing one stop to secure a first-ever state title, the Panthers could not get one. And with four seconds left, Vikings quarterback Max Keller hit Cardel Pigford in the end zone for a 3-yard touchdown as Wood took the trophy with a 19-15 win Friday night at Hersheypark Stadium.

“We’ve been on the other side of that though, too,” Panthers coach Ryan Nase said. “We win 56-49 at the end of the game last week (in the semifinals). We win 43-42 in the district championship. So, Cinderella’s time ran out I guess.”

Cheltenham’s Sidiqq Williams (7) leaps into the end zone for a touchdown late in the game to give the Panthers the lead during the PIAA-5A Championship at Hersheypark Stadium in Hershey on Friday, Dec. 6, 2019. (Mark Palczewski/For MediaNews Group)

Two weeks prior in the District 1 final, Cheltenham took the lead on a Adonis Hunter to TJ Harris 25-yard touchdown pass with 28.6 seconds left then denied an Academy Park two-point conversion at 16.4 seconds to claim the one-point victory.

Seven days later in the state semifinals it was another comeback, this time Cheltenham scoring the final 14 points — Nate Edwards’ 4-yard touchdown run with 45 seconds giving the Panthers the victory over District 3 champ Cocalico.

Friday seemed as if it was going to echo those previous two games. The Panthers took a 13-12 lead with four minutes left after Hunter connected with Sidiqq Williams for a 3-yard TD with Zach Gaffin running in the two-point conversion extended the margin to 15-12. Wood, however, went 65 yards on 11 plays for the game-winning score. Cheltenham couldn’t create magic on the ensuing kickoff and had to leave Hershey heartbroken.

#FOOTBALL: @CheltenhamSD’s @Tj_Harris0 with a simply phenomenal catch, jumping up & hauling in an @AdonisHunter1 pass then getting a foot down in the back of the end zone for a 20-yard TD 6:10 3Q vs. Archbishop Wood. pic.twitter.com/ian2ZvmPYg

And while it was a historic season for the Panthers — 14 wins, a Suburban One League American Conference title, the program’s first District 1 title and first PIAA final appearance — coming up just a play short of a state title may require a little time before those accomplishments can be appreciated.

“We’ll figure that part out in a couple weeks. Tonight, we lost the state championship on the last play of the game,” Nase said. “We’ll get there eventually but certainly not now.”

The Panthers came into the final averaging 43.4 points in their first five playoff games but were held scoreless in the first half as they could not find the big plays that had been fueling the offense. Cheltenham also came up empty on two trips inside the Wood 20 before the break.

“Penalties and we run the ball to get down there and we can’t run and we get a penalty and we’re forced to throw the ball,” Nase said. “Anytime you got to air it out down in here (close to the end zone), it’s always tough.”

Wood led 6-0 at half and just 11 seconds into the third doubled the advantage, recovering a fumble on the kickoff and Kaelin Costello scoring on a 28-yard TD run the next play.

The Vikings seemed poised to pull away when they recovered a muff on the ensuing kickoff at the Panthers 38 but the Cheltenham defense held and Wood came away with no points after missing a 28-yard field goal.

The Panthers picked up a big yards two plays later as Jamir Barnes dashed down the right side for 40 yards — an additional 15 tacked on due to a Wood personal foul. The drive ended in with Cheltenham get on the scoreboard courtesy a fantastic catch by Harris — leaping up to grab a Hunter pass and tapping a foot down just inside the end line for a 20-yard touchdown.

“He’s a unbelievable player on both sides of the ball,” said Nase of Harris. “Nothing new. He made two big catches, he made a ton of great plays defensively at free safety to stop some longer runs. We got some good stops today, but we couldn’t stop them when we needed to.”

Barnes got Cheltenham a big stop when he reach up and grabbed an interception in the fourth quarter, give the Panthers the ball back for a drive in which they took the first and only lead. Cheltenham went 70 yards on 13 plays, converting one fourth down — Hunter sneaking for two yards on 4th-and-2 from the 6 — and went up 15-12 when Hunter hit Williams for the 3-yard score and Gaffin ran in the two-point conversion.

“To be honest with you, we got some people back because it was the end of the state championship game,” Nase said. “We lost two starting linemen for the second quarter and most of the third quarter. And we got them back, they were able to tough it out for a little bit. Adonis made plays — our guys made plays. TJ goes up and gets it. Our guys just made plays.”

But Wood made the final, deciding play — Pigford’s 3-yard TD catch from Keller with just four ticks on the clock and leaving the Panthers’ 2019 story achingly short of a state title.