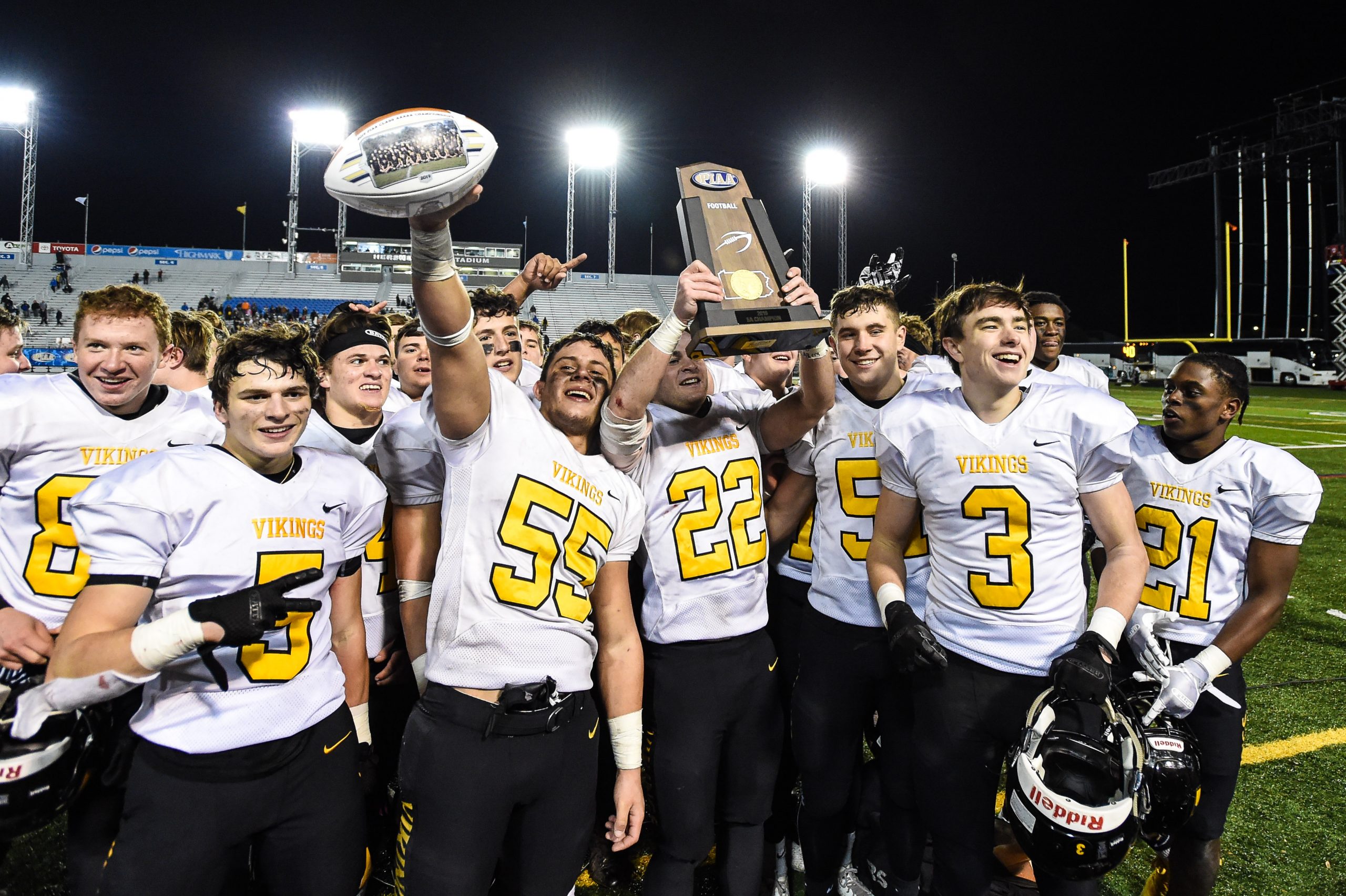 Archbishop Wood's Thomas Pomponi (55) holds a football aloft and Ryan DiVergilis (22) raises the trophy while they celebrate with their Wood teammates after their thrilling win over Cheltenham at the PIAA Class 5A Championship at Hersheypark Stadium in Hershey on Friday, Dec. 6, 2019. (Mark Palczewski/For MediaNews Group)

HERSHEY >> Seconds left and a state title on the line, Max Keller had no doubt Cardel Pigford was going to catch his pass.

“I saw him come open,” the Archbishop Wood junior quarterback said. “I know Cardel. We’ve been playing since freshman year together. So I knew he was going to be open, I knew where he was going to be at and I just let him go make the play.”

Keller hit Pigford on a slant for a three-yard touchdown with just four seconds remaining to finish a late 11-play, 65-yard comeback drive as the Vikings edged Cheltenham 19-15 to claim the PIAA Class 5A championship in a thrilling contest Friday night at Hersheypark Stadium.

“I’m just so happy they gave me a chance to make it,” Pigford said.

Archbishop Wood’s Cardel Pigford (25) catches a touchdown pass against Cheltenham’s Zachary Gaffin (12) and Nate Edwards (6) with four seconds to give the Vikings the lead in their 19-15 win in the PIAA-5A championship at Hersheypark Stadium in Hershey on Friday, De. 6, 2019. (Mark Palczewski/For MediaNews Group)

Kaelin Costello ran for 280 yards and a touchdown on 38 carries while the Wood defense held Cheltenham’s high-scoring offense in check as the Vikings (11-3) won their third state crown in four seasons and the earned the program’s sixth title overall.

The state championship is the first for the Vikings under coach Kyle Adkins, who in his second year added another PIAA title to the he won as an Archbishop Wood player in 2011 — the Vikings’ first state title.

“It’s cool, it’s a lot different,” Adkins said. “It’s hard to say, I keep getting the question, What’s better?’ I don’t know but it’s certainly a lot different. Just happy for the kids, I’m proud of them. They fought really hard this year and had a lot of tight games down the stretch. Win the semifinal in the last second, win the state final in the last second. So I’m just proud of them.”

#FOOTBALL: With 4 seconds left in the PIAA 5A final, @Wood_Vikings’s Cardel Pigford hauls in a 3-yard TD pass from Max Keller as the Viking take a 19-15 lead, which ended up the final score as Wood won the state title. pic.twitter.com/YqG8TTi0wM

For Cheltenham (14-2), it was a heartbreaking end to an historic season that saw the Panthers win their first District 1 title and reach the state final for the first time.

“Not just to lose, but to lose essentially on the last game of the game with something that we’ve practice against,” Cheltenham coach Ryan Nase said. “We gave them too many opportunities especially to start the second half and they’re a really good team, they didn’t make any mistakes. And we did.”

Cheltenham, which came into Friday on a 12-game win streak, trailed 12-0 early in the third quarter but rallied to take a 15-12 lead with four minutes remaining when quarterback Adonis Hunter found Sidiqq Williams for a three-yard touchdown followed by Zach Gaffin’s two-point conversion run.

Costello opened Wood’s final drive — which began at the Vikings 35 — with a 17-yard run. Facing a 3rd-and-7 at the Panthers 35, Costello gave Wood a first down by rushing for eight. Then on a 4th-and-1 from the 18, Costello — on his eighth and final carry of the series — dashed for 15 yards down to the three with eight seconds left.

Rather than try a tying field goal, Wood elected to go for the touchdown and the lead and got it when Keller connected with Pigford in the left side of the end zone — Pigford losing his grip on the ball before regaining control as he went to the ground for the three-yard score.

“With eight seconds left, we went to max protection,” Adkins said. “It was two men out on a route so we trust our guys to protect that. Our quarterback’s smart enough and we were reminding him if it’s not there just throw it out of back of the end zone, we’ll kick the field goal go to overtime. But great execution by the kids. Great execution.”

Cheltenham could only return the ensuing kickoff to its own 23 and with the dramatic win in hand Wood stormed the field in celebration.

“What more can you ask for — last drive in the state championship,” Keller said. “Have faith in your offense, go down and score. Nothing else you can ask for. Comes down to the offense and we succeeded.”

Costello was most of the offense for Wood on the night — his 280 yards on the ground accounting for most of the Vikings’ 333 yards of total offense. The junior compiled 124 yards on 17 carries in the first half and just 11 seconds after halftime gave the Vikings a 12-0 lead with his 28-yard touchdown run.

“O-line just stepped up major,” Costello said. “And they were opening big holes and I don’t know, honestly, we just turned it on. We dug deep in our hearts and that’s our team. We don’t have the talent that past Wood teams have but I think we have the biggest heart of all the Wood teams.”

Jamir Barnes paced Cheltenham with 89 yards rushing on 20 carries. Hunter was 7-of-16 passing for 79 yards and two touchdowns and also ran eight times for 42 yards. TJ Harris caught three passes for 52 yards — 20 coming on a stellar touchdown catch in the third quarter.

Archbishop Wood — which ended the year with seven straight wins — held the Panthers to their second-lowest scoring output of the season. Cheltenham came into Friday averaging 37.6 points per game and had scored a total of 99 points in its previous two playoff games.

“We just wanted to play our brand of football,” said Wood senior Thomas Pomponi, who led the Vikings with 10.5 tackles. “Take this week just like any other week. We came in here, gameplanned for what they did and executed.”

Cheltenham had a pair of drives inside the 20 in the first half but came up empty on both with the Vikings responding to each stop with field goals.

The Panthers had a 1st-and-Goal from the 7 in the first quarter, yet could only move two yards closer before a false start backed them up to the 10. A miscue on a field goal try resulted in an 11-yard loss. Wood then went on a nine-play, 54-yard drive to go up 3-0 when Ryan Morgan made a 42-yard field goal at 8;45 in the second quarter.

On its next possession, Cheltenham went 51 yards to reach the Wood 13 but on 4th-and-10 a sack by Pomponi forced the turnover on downs. The Vikings ended the half with a 15-play, 81 yard dive — spiking the ball with a second left at the Panther five to allow Robert Meyer to hit a 22-yard field for a 6-0 advantage at the break.

“It’s kind of the bend don’t break philosophy,’ Adkins said. “I think they had the ball inside of our 40 or 30 a decent amount of times but our kids performed pretty well with their backs against the wall and they certainly did that tonight. So proud of the team as a whole.”

Cheltenham fumbled on the kickoff to start the third quarter with Wood recovering at the Panther 28. On the next play, Costello ran left then cut back to find a seam and raced 28 yards for the game’s first touchdown at 11:49. A incompletion on the two-point conversion kept the Vikings lead at 12-0.

“I just dug deep and my will outlasted theirs,” Costello said. “It was great blocking. I made a few guys miss and to go in that end zone in a state championship in this amazing stadium was just amazing to me.”

#FOOTBALL: @Wood_Vikings’s Kaelin Costello cuts back to find a lane & gets to the end zone for a 28-yard TD run 11:49 3Q to put the Vikings up 12-0 vs. Cheltenham. pic.twitter.com/Tx5Ny8huWF

The Panthers muffed the following kickoff and Wood recovered again at the Cheltenham 38. The Vikings had a 1st-and-Goal at the nine but could get any points on the drive when they missed a 28-yard field goal at 8:23.

Two plays later, Barnes dashed for 40 yards down the right side with a Wood personal food putting the Panthers at the 25. A holding on the next play backed Cheltenham to the 36 but on 4th-and-5 from the 20, Hunter went to Harris in the end zone and Harris came with a fantastic catch — leaping to grab the ball then getting a foot down just inside the end line as the Panthers cut the margin to 12-7 at 6:10.

Cheltenham’s drive to take the lead in the fourth was set up by Barnes’ interception — a holding penalty on his return giving the Panthers the ball at their own 30. Sam Sykes opened the series with a 15-yard run while two plays later Hunter found Harris for 29 yards to the Wood 24.

Facing a 4th-and-2 at the six, Hunter plowed for two yards on a QB sneak and three player after that Hunter rolled and hit Williams, who turned and went into the end zone for a three-yard touchdown. Gaffin’s run for two had the Panthers up three with exactly four minutes remaining.