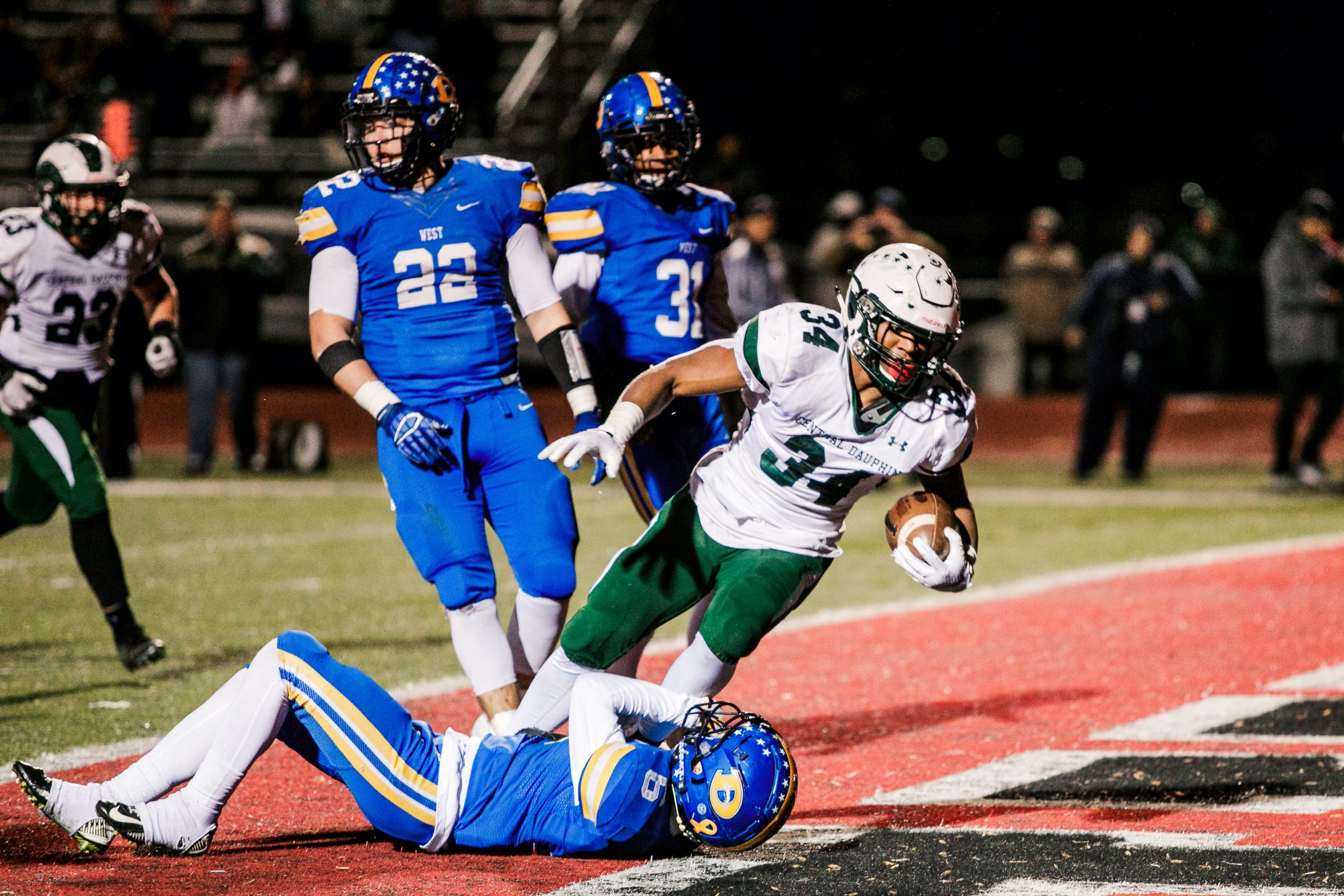 CALN >> Downingtown West’s state title dream disappeared Friday night, buried by a massive offensive line on the other side of the ball.
The Whippets score plenty of points, but it was the Central Dauphin offensive line that dominated the game as the Rams ran for 473 yards on the ground in a 65-44 win in the PIAA Class 6A semifinal.
Central Dauphin will now play the winner of today’s St. Joseph’s Prep vs, Pittsburgh Central Catholic, game next Saturday at HersheyPark stadium at 6 p.m.
Central Dauphin (12-2) was led by Timmy Smith, who rushed for 264 yards on 22 carries, and he also scored two rushing touchdowns while catching a pass from Max Mosey for another.
“We opened up some big holes for me tonight,” Smith said. “They have been doing it all year for me. They did a great job tonight.”

The Rams took the opening kickoff and ran seven running plays deep into Whippet (12-2) territory before settling for a 32-yard field goal and a 3-0 lead. But, one could see that the Rams’ running game was going to give Downingtown West trouble.
But, the Whippets are explosive, and quarterback Will Howard completed his first nine passes on a night he threw for 274 yards completing 22 of 31. But he did throw two huge interceptions to start the second half, and that began the Rams’ onslaught.
With a 23-14 lead at halftime, Central Dauphin kicked off to Downingtown West. On the first offensive play, Howard was picked off by the Rams’ Mark Clark, who rambled down to the Whippet 3-yard line. One play later, Marques Holton went in from three yards out and it was a 30-14 Rams lead.
After taking the ensuing kickoff, the Whippets were hurt by another interception as Central Dauphin linebacker Nyeem Sims picked Howard. Three plays later, Smith went around the left side and it was a 37-14 Rams lead.
“We wanted to be the best team Downingtown West ever had at the start of the season,” Howard said. “And tonight, they were the better team and I hurt us with the two interceptions. But, I think we set the standard for future Downingtown West teams and we accomplished a lot this season. They were just the better team tonight.”

The Whippets did not roll over, however, as Julian Williams and Tyriq Lewis ran kickoffs back deep into Central Dauphin territory and set up two West touchdowns, on a six-yard run by Lewis and a 15-yard run by Sean Pelkisson.
But, the Rams ended the Whippets’ momentum with an 89-yard kickoff return by Malachi Bowman at the end of the third quarter to make it a 51-30 Central Dauphin advantage. The Rams outscored Downingtown West, 28-16, in the period to take a 21-point lead into the fourth frame.
But, the Rams’ ground game, fueled by the talented offensive line and helped by the Whippets losing three defensive starters to injury in the first half, kept chugging along. The Rams did not throw a pass in the second half, and after Howard went in from a yard out to close the gap to 51-37, Central Dauphin’s ground assault continued.

The Rams recovered the Whippets’ onside kick at their own 47-yard line. Two plays later, Smith went through a big hole up the middle for a 36-yard touchdown run, and the Rams had control of the game and the clock, leading 58-37 with 10:03 to play.
The teams traded touchdowns to make the final score 65-44 and Lewis said there was no quit on the Downingtown West sideline.
“We kept trying to come back,” Lewis said. “They made it tough and this feeling stinks right now. But, these guys are my brothers and we when we got punched, we came back with 11 fists right back at them.”
The loss may be painful, but Downingtown West accomplished a whole lot this season, winning the District 1 Class 6A championship for the first title since 1996, when there was still just one school in Downingtown.
“We knew they were a big, physical football team,” Downingtown West head coach Mike Milano said. “And we lost those guys in the first half and depth played a part. But, these kids have been great and I am very proud of them.”

Tyriq Lewis of Downingtown West sheds a tear in the final team huddle after the loss to Central Dauphin. (Nate Heckenberger – For MediaNews Group)