Ridley, Interboro out to ‘kick down each other’s doors’ 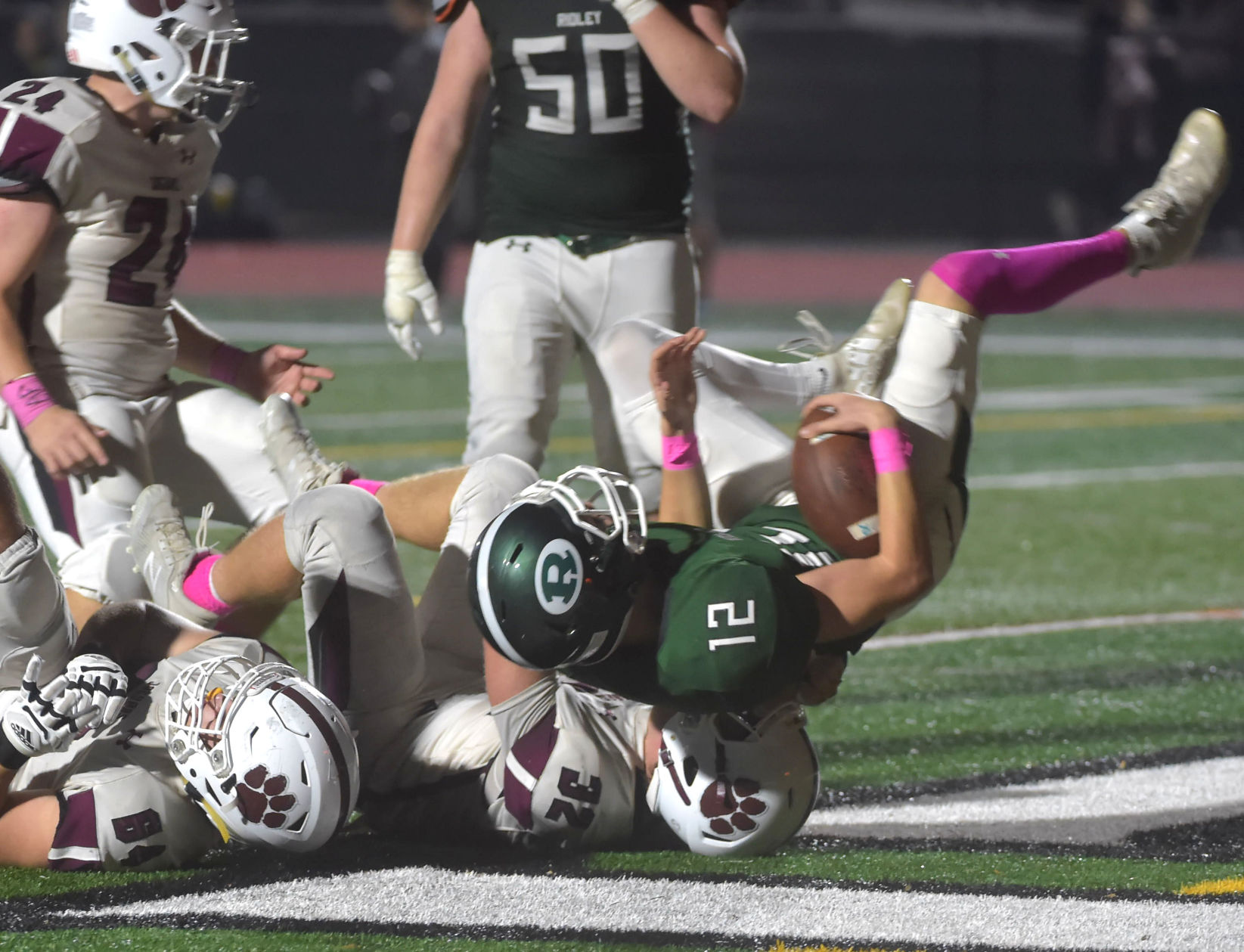 RIDLEY TWP. — Ridley seniors Jack Grace and Dylan Staley have heard the saying a few times over the years.

“We’ve been reminded a lot, ‘Well you know, if you lose, the turkey doesn’t taste as good for a whole year,'” said Grace, the Green Raiders’ starting quarterback.

Ridley and Interboro players can only hope the turkey is hot and tasty, rather than cold and bitter.

“It’s such a big tradition and a huge, huge game,” said Staley, the Green Raiders’ top running back. “We are extra hyped about it and we cannot wait to play on Thursday. It’s going to be our last game together as seniors, and we want to do whatever we can to win.”

This year’s affair marks the 51st edition of the game, with Ridley playing host to the Bucs at Phil Marion Field. The opening kick is scheduled for 10 a.m.

Ridley is on a five-game winning streak in the series. Interboro’s last win was seven years ago, in 2012. The teams did not meet on one of those years (2013) due to Interboro’s run to what then was a District 1 Class AAA title.

“For my senior year, I’m definitely excited that the game is here,” Grace said. “It’s our final game so we have to go all out.”

Taking a break from practice Tuesday evening, Grace and Staley both noted how it’s been challenging at times to make sure the underclassmen are focused and prepared. Some players stopped attending practice altogether, but the Green Raiders will have their core performers in uniform and eligible for Thursday.

Interboro quarterback Michael Zane will lead the Bucs as they try to end 2019 on a high note on Thanksgiving against Ridley. (DFM File)

“The starters have the same mindset, to stay focused because we obviously want to get this win, but there are some kids I haven’t even seen in weeks,” Grace said.

“If they know they’re not playing, they don’t even come,” Staley added. “It’s mainly based around us seniors, knowing that it’s our last game together. It means much more to us and we will be prepared.”

Ridley (7-4) saw its season end in the first round of the District 1 Class 6A tournament, a 42-7 setback at Central Bucks West. Interboro (1-9) recorded its one and only win of 2019 in a make-up game against Chichester earlier this month, a 28-6 decision.

When it comes to Interboro vs. Ridley, you can toss out the win-loss records. All that really matters is taking home the ‘W’ Thursday morning.

“Being able to end it here, hopefully we can get the win, that will be awesome,” Grace said. “Even waiting these last few weeks to play football again, it feels like it’s been forever.”

With wind gusts up to 35 mph forecast for Thursday, expect both run-first offenses to stay on the ground. Interboro has been apt to throw the ball more often, since the Bucs have mainly played from behind this year. But they still averaged 37.7 carries per game. In the Bucs’ victory against Chichester, they ran the ball 60 times, a season high, for 251 yards.

Paul Finley is Interboro’s top rusher with 330 yards and a touchdown. Bubba Phillips has 312 yards and a pair of scores.

With Grace and Staley, Ridley has two of the leading rushers in Delco. Staley is closing in on 1,000 yards as he ranks sixth among county players with 961 yards and 10 TDs. Grace has the fifth-most rushing yards among Delco quarterbacks with 481 yards and five TDs.

“We’re definitely going to be run-based and do what we have been doing a lot this year,” Grace said. “We have actually thrown the ball a good amount, but it’s supposed to be pretty windy, so our running game, which is pretty reliable, will be all right, I think.”

While only two miles separate the schools on a MacDade Blvd. cruise, there haven’t been many friendships forged among the schools’ student-athletes in recent years. Staley and Grace are acquaintances with Interboro’s Phillips and Mike Zane, who attended Ridley his freshman year. Zane is the Bucs’ starting quarterback.

Make no mistake, no one is sending Christmas cards or sharing stuffing and gravy at the dinner table Thursday evening.

Allow Ridley senior lineman Sean O’Doherty to describe what the rivalry means to him. It’s worth noting that on his first attempt, O’Doherty had to be warned of his colorful language.

“It’s basically about bragging rights. We don’t like them, they don’t like us,” he said. “Every time we see each other we want to kick down each other’s doors and beat the bricks off each other for four quarters of hell.”

Now if that doesn’t get you ready for a classic Interboro-Ridley showdown, what will?

“I’ve been on the varsity for three years and in my high school experience, we haven’t lost to them,” senior lineman Mike McDonnell chimed in. “My biggest thing is to go 4-0 and not lose to them.

“It’s definitely an important game, almost like a playoff atmosphere, but more than anything else it’s about pride.”