After shooting, Thanksgiving has special meaning for Upper Darby’s Anderson 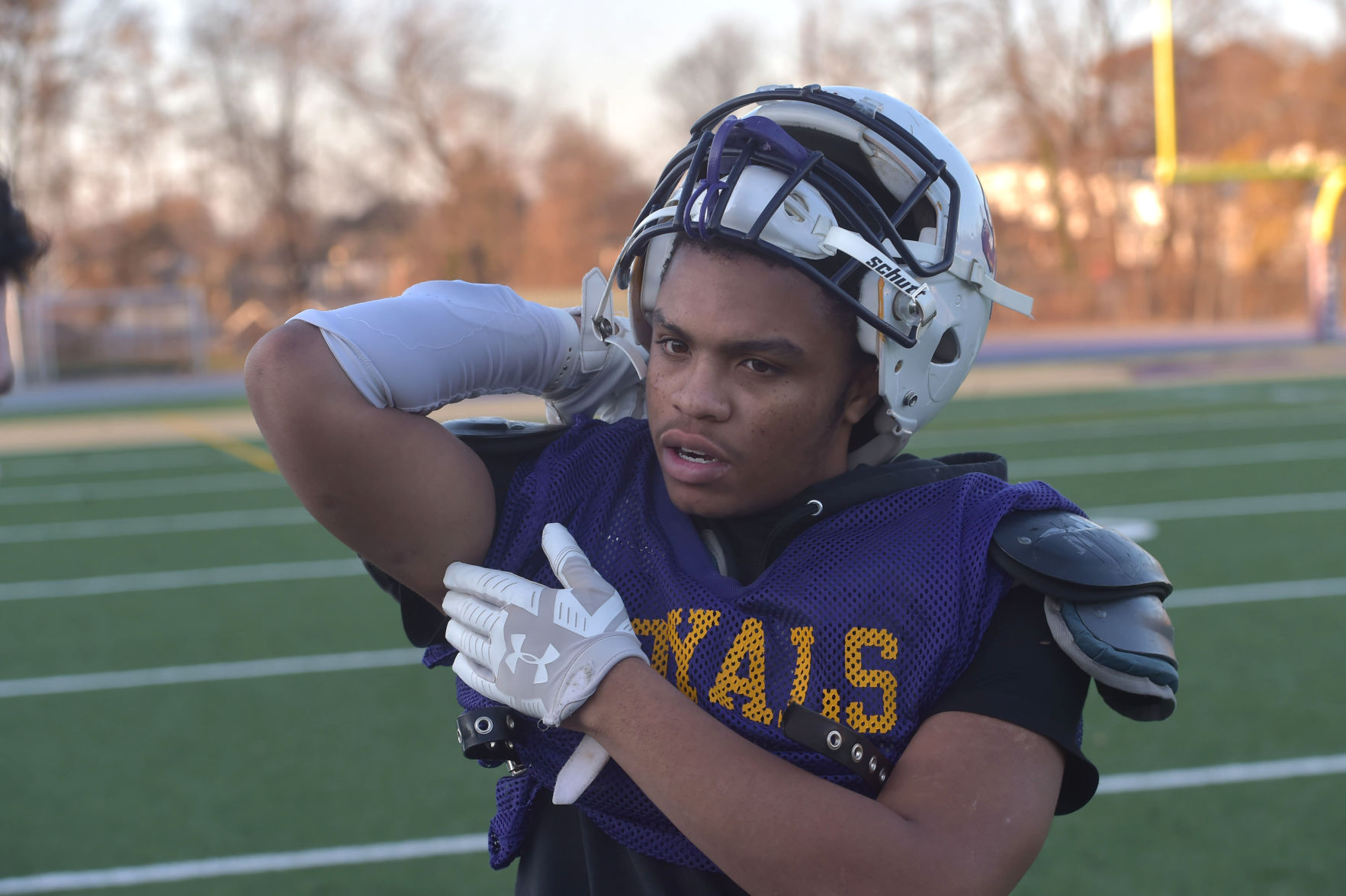 Upper Darby's DeSean Anderson shows where he caught two of the five bullets that hit him during an armed assault in North Philadelphia in 2017 while he was walking to his grandmother's house. (PETE BANNAN/MEDIANEWS GROUP)

He’s also thankful for the love and support of his family, teammates and coaches. Most of all, the Upper Darby senior is thankful to be alive.

The date was July 17, 2017. While walking the streets in North Philadelphia after a  spending the day at a cookout with friends in the Germantown section of the city, Anderson was all alone at night, wanting to get home as quickly as possible.

Anderson had a weird feeling as he hopped off the bus and made the trek to his grandmother’s house. Something had told him to get off at the previous stop and take the long way home.

“There’s a back way I can take which will lead me right to her street. I didn’t get off at the back way stop and I should have,” he said. “I took the way I usually take and I got off and started walking up to my grandmom’s house. That’s when it all happened…”

Two men confronted Anderson, who a month prior had completed his freshman year at Samuel Fels High School. His dream was to play high school football, an opportunity he would earn his senior year at Upper Darby.

But football was the last thing on his mind on this night.

“I had put my phone in my pocket, which is what I do every time, just in case something happens. I know my surroundings,” he said. “As they were walking up, we switched sides. We turned positions. They stopped me. I looked back and they asked me if … I was in a gang from the area. I’m not in it. I said ‘No’ and they said ‘You’re lying.’ And then they said, ‘Give me everything in your pockets.’ I wasn’t going to do that.”

The perpetrators reached for their weapons and Anderson quickly made a run for it. He found a hiding spot between two parked vehicles.

More shots were fired in Anderson’s direction. He couldn’t hide out any longer; he had to run fast.

“So, I was running on the opposite side, down the street, and they are standing there shooting at me,” he said. “I stumbled, just trying to duck my head. I think they hit me in my back first, and I didn’t feel the other shots because my adrenaline was up at this point. I didn’t realize I was shot more than that one time.

“As I’m running, my vision is blurred but I see them take off. They … are gone. I get around the corner to the next block. As I get there, I tried to knock up on somebody’s door. The people were scared to answer the door because they heard the shots, they didn’t know who I was.”

Anderson’s state of consciousness was waning. He had to remind himself to stay awake.

“About 10 seconds later, it clicked in my mind that I was not dead and I had to get up and get help,” he said.

Upper Darby football player DeSean Anderson recovered from being shot multiple times two summers ago and returned to the gridiron, becoming one of the Royals’ best players in his senior year. (PETE BANNAN – MEDIANEWS GROUP)

A neighbor by the name of Chase, along with his wife, gave a wounded Anderson shelter. The couple called police right away.

“They gave me a blanket to hold the blood inside my body,” Anderson said.

Kareem McAdams, a senior running back and All-Delco at Upper Darby, is Anderson’s stepbrother. McAdams was nearby when the incident happened, but kept out of the line of fire and stayed out of site. McAdams had no way of knowing his brother was in serious danger. Anderson’s grandmother was outside on her front porch, but immediately went inside her house when she heard the gunfire erupt.

Anderson waited 10 to 15 minutes for paramedics to arrive. During that time, he told the couple who had helped him to pass along a message to his mother, Janet.

“I told the guy Chase, if I don’t see my mom again, please tell her that I love her. They called her then,” Anderson said. “She was living up here (in Upper Darby) and I was in North Philly. The paramedics took about 10 or 15 minutes to get there. I got in the back of an ambulance and was taken to the hospital. The doctors told me I was shot a total of five times: my back, my leg, two right here (arm/biceps) and my stomach. To this day, if you were to punch me right here (left lower abdomen area), I couldn’t feel it because it’s all numb. I have scars …

Anderson stayed in the hospital for one week. He said that summer “was like an offseason for me.” In other words, no football, just rehab and recovery.

“My doctor would not clear me for football, because I might do damage to my spinal cord,” Anderson said. “I have always loved football, ever since I was a little kid.”

In the fall semester of his sophomore year, his first at Upper Darby, Anderson was cleared to play non-contact sports. He tried out for the Royals basketball team and earned a spot on the team.

In his junior year, while still enduring the effects of the shooting, Anderson did not participate in athletics. But he remained active, hitting the weight room and gaining notice. Upper Darby coach Rich Gentile had heard about him from other players on the team.

“I had no idea who he was,” said Gentile, who will coach his final game for the Royals at Haverford High Thanksgiving morning. “I kept hearing how he was really fast.”

Anderson tried out for the team this summer and received medical clearance to play football again. Not only did he make a remarkable first impression, the kid who had been shot five times and hadn’t played football in years was proving to coaches and teammates that he deserved a prime role on the 2019 team.

He was named a starting defensive end.

“He is one of our best players,” Gentile said.

Anderson leads the team in sacks this fall. If you were to tell Anderson two years ago, as he lay in a hospital bed recovering from multiple gunshot wounds, that he would be a defensive star on a varsity football team one day, he would have never believed you.

The first game of the season was emotional for Anderson, his mother and two little brothers.

“I think I cried to my mom that night. I never thought I would be there, back at that point, playing football again,” he said. “I sent a message to all my teammates, too, just telling them it’s a blessing to play with all you guys and thanking them. It was a tough time getting here …

“My teammates didn’t even know about it at first. When we were practicing in summer practice, I think that’s when they knew about it. I’m a very outgoing person and easy to get along with, and I just want to make chemistry. I don’t mind telling the story, how everything happened. I think people think that I do, but it’s not a problem.”

Anderson would love to play football in college and he has reached out to a few coaches. He is accustomed to long odds, both in football and in life. Outside of football, he wants to pursue a career in visual arts.

“Sometimes they ask me to make fliers for the game on social media, and I like doing stuff like that,” he said.

Anderson recovered the fumble to seal UD’s win in their final home game of 2019, a 6-0 overtime victory against Springfield on Oct. 26.

“That was very emotional for me,” Anderson said. “I shed a lot of tears that night.”

Upper Darby (5-5) and Haverford (10-3) is one of the most storied Thanksgiving rivalries in the nation. The Royals are looking to end a nine-game losing streak to the Fords and give Coach Gentile a happy sendoff.

“With this game against Haverford, it’s our last game to play with each other and we’re planning to shock the world,” Anderson said. “I’m just going to leave it all out there on the field.”

Chichester’s Jones thankful for one last Turkey Bowl
Ridley, Interboro out to ‘kick down each other’s doors’