Six-point tutorial: what Downingtown West needs to do to beat Coatesville 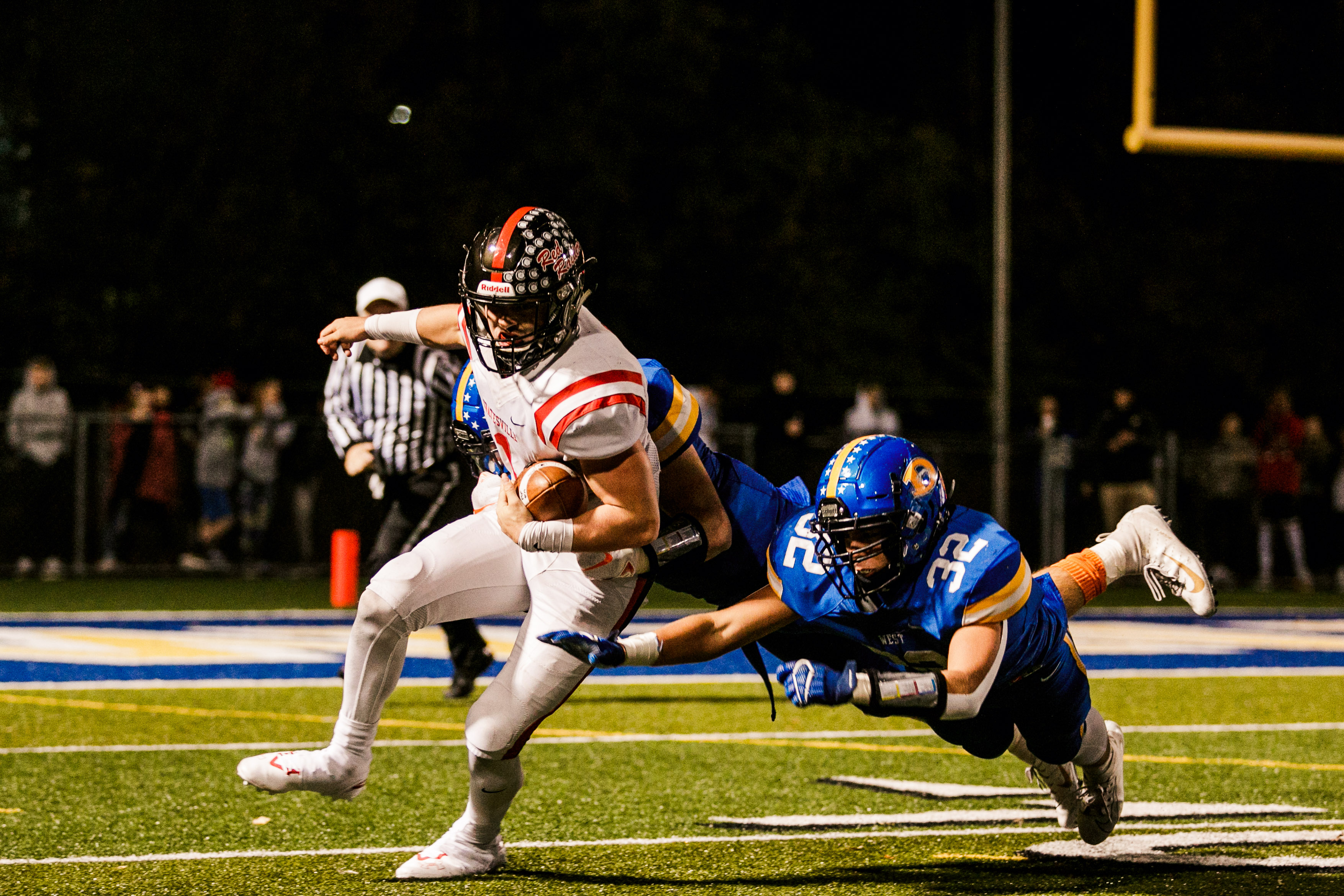 EAST MARLBOROUGH – It’s a question that’s bedeviled football coaches for many years across the wide swath of Southeastern Pennsylvania which comprises District 1: how to beat Coatesville.

The Raiders are the two-time district champs and they are going for the three-peat on Friday against Ches-Mont rival Downingtown West. In the regular season meeting, also at Kottmeyer Stadium, Coatesville handed the Whippets their lone setback of 2019. Sure, the rematch is this year’s Game of the Century, but it is not an overstatement to say that this is one of the bigger local postseason matchups in a while.

And who better to dissect the task at hand than Downingtown East head coach Mike Matta, and Unionville’s Pat Clark? Matta’s Cougars are the only team from the district to actually beat the Raiders this fall: 28-24 on Oct. 25th. And Clark’s Indians were the only other Ches-Mont foe to give Coatesville a battle before succumbing 34-21 in late September.

In the remaining five games against league foes, the Raiders won by an average score of 31-13.

“(Coatesville) plays with a passion and those kids hate to lose at anything,” said Clark. “And if Coatesville makes a big play, you can’t panic. You have to go in realizing they are going to get their share, and you have to be able to shake that off mentally.”

Both Matta and Clark acknowledge that the recipe for success against the Raiders is easier said than done. But the duo came up with a list of half a dozen (very difficult) must-does.

But first, an overview: Matta and Clark are expecting a high-scoring affair on Friday. Surely more points than the combined 50 scored the first time around. That is not going out on a limb when you consider that each side has a senior Division I recruit at quarterback, Downingtown West’s Will Howard (Kansas State) and Coatesville’s Ricky Ortega (Villanova).

And both are surrounded by elite playmakers. Howard has a star runner in Tariq Lewis and a bruising tight end in Sean Pelkisson. Ortega has the multi-dimensional and combustible wideout Dapree Bryant.

“If there is a team that can go score-for-score with Coatesville this season, it’s D-West,” Clark said.

“The talent of (Bryant) and the will of (Ortega) was the difference in the first game,” Matta pointed out. “I think West has more overall talent, but Coatesville’s going for their third district championship. They have a lot of experience in this game.”

Trying to find a big edge in coaching just isn’t there. West’s Mike Milano, Coatesville’s Matt Ortega and their staffs are just about as good as it gets at this level. Some believe that Milano has done more with less at West in the past, but this year both sides are loaded.

“People like to say ‘I wish I had talent like (Coatesville) has,’ but Matt (Ortega) does a good job,” Matta said. “People fall asleep on his coaching ability.”

With that out of the way, here’s the six-point deep-dive into how to beat Coatesville:

It’s a gimme, but vitally important. Ortega and Bryant have been tossing the football around and gashing defenses for four years now.

“You want somebody other than Bryant and Ortega to beat you. But that’s easier said than done,” Clark said. “And even if you can do that, they have a lot of guys that can beat you.”

Like receivers Artie Burgess and Abdul- Sabur Stewart. Burgess is a track star and Stewart ripped Souderton for 180 receiving yards in the district opener.

Last month, Downingtown East devised an ambitious and sophisticated scheme in an attempt to contain Bryant and Ortega, and it was largely successful.

“We tried our best to keep the ball out of (Bryant’s) hands and then we put a spy on (Ortega),” Matta explained. “Keep in mind that you can do that on the grease-board, but that doesn’t mean you can do it on the field.”

Of course, of you double-team Bryant and focus another defender on Ortega, you are giving up considerable attention elsewhere. For the Cougars, the biggest challenge was finding Bryant.

“He is so dynamic and they line him up all over the place, including the backfield,” Matta said. “It took a lot of hard work by our players to take ownership on figuring out where he was at on every play.

“For our team to score a touchdown, we needed the majority of our kids to do something right on the field. With Coatesville, 10 guys could be wrong and (Bryant) can be right, and he can score a touchdown.”

Clark readily admits that when Unionville faced Ortega two months ago, he was hobbled by a lingering foot injury. That is an advantage that Downingtown West doesn’t have.

“Ricky was banged up and (Coatesville) wasn’t as eager to run him, even though they did some,” Clark said.

“We tried to make them throw the ball short, and we put a huge emphasis on our linebackers and secondary having to make the tackle in space.”

The problem with Bryant is that even if you can contain him defensively, he can still have a huge impact on the game as a defender and on special teams. The speedy senior has scored five non-offensive TDs and has picked off six passes so far.

“He returned a punt for a touchdown against us and he had a pick-six to end the game,” Clark recalled.

Once again, Downingtown East dealt with this issue by trying to avoid Bryant whenever possible. That meant booting it away from him, even if the downside was taking a hit with field position.

“If we were in the middle of the field, we punted it out of bounds and we always kicked it away from him on kickoffs,” Matta said.

And Bryant is such a threat as a defensive back, avoiding him means that you, essentially, have to cut the field in half. But that was a concession that Matta was willing to take.

“Whoever he was defending, we didn’t throw the ball to that guy,” he explained. “He just makes things happen. You think you throw a good pass and, boom, the next thing you know he is running the other way.”

Matta and Clark say that you have to try to do things that bother Ortega, or he will shred your defense. He has nearly 9,900 career passing yards (and 2,800-plus career rushing yards) after all.

One way is to pressure him in the pocket while staying in lane to prevent a scramble. And the Whippets have some guys up front that can do this, including ends Max Hale and Pelkisson, as well as 280-pound tackle Beau Bryan.

“If you can get to him, you can slow him down, but trying to stop Ricky Ortega is darn near impossible to do,” Clark acknowledged.

“If Pelkisson wants to get to the quarterback, I really don’t know how to stop him,” Matta countered. “And I wouldn’t sleep on (Bryan).”

The Cougars were able to slow Ortega down by mixing up pass coverage and varying blitz packages, but those measures have a shelf-life.

“(Ortega) has a lot of qualities that make him a great player, but I say that his number one quality is that he’s a winner,” Matta said. “He finds a way to win.

“You can tell he’s a coach’s son. He knows football. In his four years, we’ve come up with some tricky schemes and we held him off for a while but he figures out what you are doing.”

It’s always an effective way to keep explosive weapons in check. They can’t hurt you if they are on the sidelines. Downingtown West has the offensive personnel to play ball-control, which will limit the possessions for Ortega-and-company.

“West has a very talented runner (Lewis) and quarterback (Howard), and (wideout Julian Williams) is pretty good. And their tight end (Pelkisson) is a killer,” Matta said.

But often times this season, the Whippets have been so explosive that ball control goes out the window. Is West comfortable winning a game in the 20s? They weren’t in the regular season.

“You have to shorten the game against Coatesville,” Clark said.

This kind of piggybacks on limiting explosive plays, but it is imperative. It is far better to force the Raiders to use 10 or 11 plays to go down the field than to surrender big chunks of yards or long TD plays. Time-consuming drives mean more opportunities for mistakes by the offense and opportunities for your defense.

“The longer they have to snap the ball, the odds go up for you,” Clarks said.

“You have to make them go the long way,” Matta agreed. “Historically, (Coatesville) takes a lot of penalties and they will turn it over occasionally.”

If the district playoffs have shown us anything, it’s that Coatesville is at its most dangerous when faced with adversity. The Raiders have trailed in all three postseason games, but have responded forcefully.

Against Souderton, they were down 7-0 and scored the next 49 points – in one quarter. And against Central Bucks West and Garnet Valley, Coatesville scored 28 straight in each after finding itself in a deficit.

“You can never let up on them,” Matta stressed. “They are like the tide. You can hold it out for a while but it just keeps coming. Eventually it’s going to overwhelm you.”