A closer look at Coatesville-Dtown West I, with round 2 on the horizon 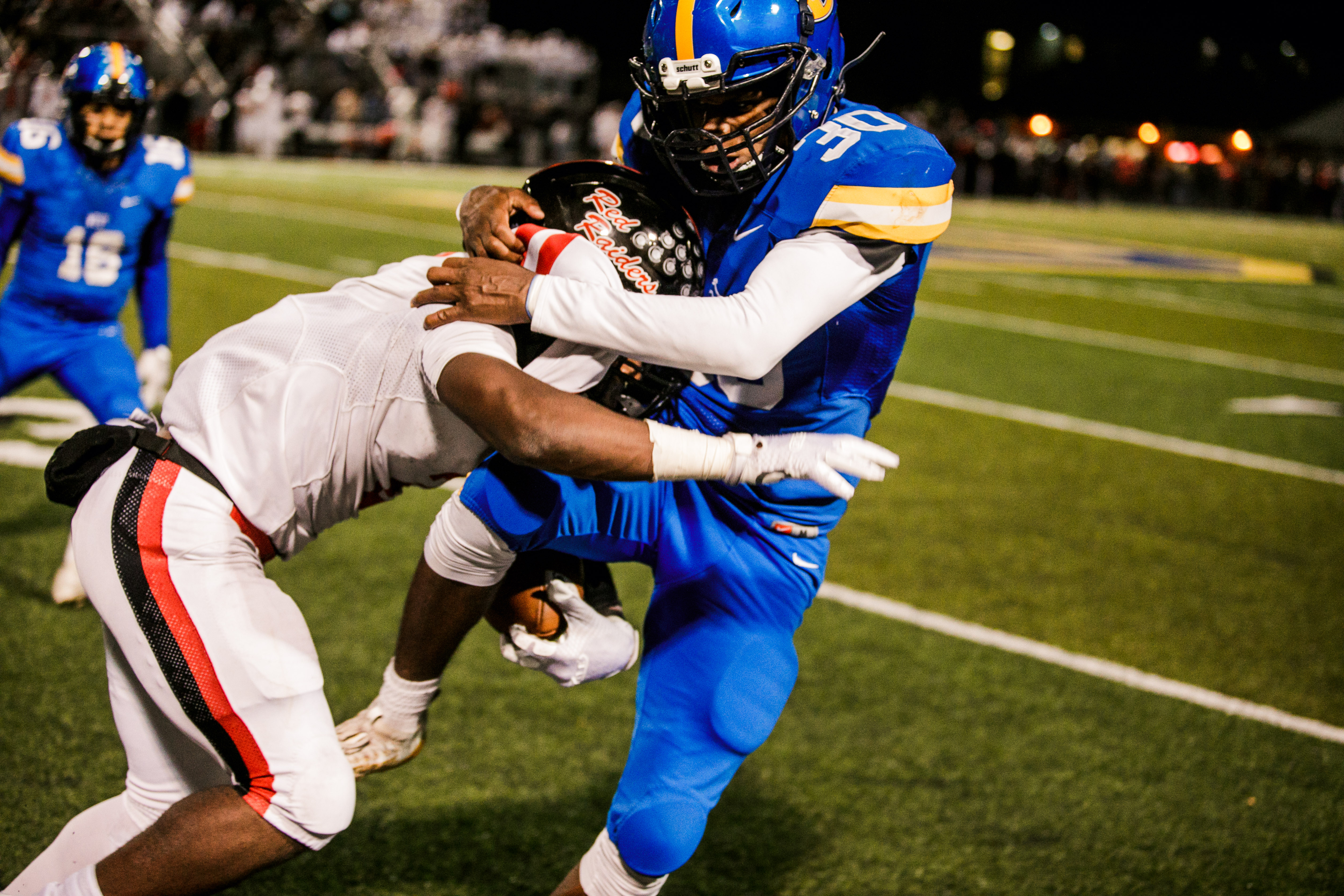 A Coatesville-Downingtown West rematch in the District 1-6A title game is what many area fans were hoping for.

Kottmeyer Stadium will likely be packed, Friday, to watch the two best teams in District 1 battle for not only district supremacy, but everything else that comes with the historic Red Raider-Whippet rivalry.

For Downingtown West, this is a chance at retribution after Coatesville ruined its perfect season, last month, with a 29-21 win. The Whippets haven’t beaten the Raiders since 2015, and getting over the hump in potentially the biggest Ches-Mont matchup of the decade would be as sweet as it gets for them.

For Coatesville, this is a chance to win a third straight district championship, capping one of the most dominant runs by any team in District 1 history.

Don’t expect an exact repeat of the first matchup, but we can get a sense of what adjustments might be coming by looking back at the first meeting.

Coatesville got the ball first, starting at its 36 yard line, and immediately went to a strategy employed all game. Quarterback Ricky Ortega hit Dapree Bryant and Damonte Reason on short passes, picking up a first down on two plays. On a second-and-14, Ortega escaped the pass rush of Sean Pelkisson and found Abdul-Sabur Stewart open a yard behind the line. Stewart followed a pancake block by Bryant and raced 51 yards to the West two. In a heavy set, with seven linemen and two fullbacks to the right, Ortega found an empty A-gap on the weak side, with the Whippets shifted to strength, and plunged in easily for the opening score.

On the Whippets’ first drive, they tested Bryant three times on passes and went 0-3. They picked up one first down but were forced to punt, and made the mistake of punting to Bryant, who returned it 43 yards to the West 35. West forced a fourth-and-two at its 16, but Beau Bryan blew through the line to initially hit Ortega, and Ryan Waters finished him off for a one-yard loss.

West took over and got Tyriq Lewis involved, picking two short gains, but a personal foul on Coatesville gave the Whippets a first at their 40. Two plays later, they hit on their first big play. West had three receivers to the left, with Julian Williams alone on the right. Lewis went on a deep motion from out wide, drawing Coatesville’s right corner, Artie Burgess, inside the hashmark. Alex Rosano crossed from the left slot, garnering the attention of Burgess and two other defenders. The diversion worked as quarterback Will Howard’s primary target, Williams, was wide open, crossing from the far sideline. Fifty-three yards later, West had a first-and-goal at the six and Max Hale scored two plays later on the Whippets’ second veer option.

The teams traded punts the next three possessions, though both teams threatened early in the second. Coatesville reached the West 19, but Hale got to Ortega for a 12-yard loss, forcing a punt. The Whippets then marched to the Coatesville 28, but Connor Barthmaier and John Ruttman collided with Lewis on a screen pass, forcing a fumble the Raiders would recover.

With the Whippets playing man coverage much of the night, they played way off, leaving plenty of space underneath for the Coatesville receivers. Bryant and Stewart picked up two straight first downs on short passes, moving the ball to the West 40. On third-and-10, Ortega just gets rid of it while being pursued by Pelkisson and Hale, and Bryant, who ran a slant and go, got behind the defense and tapped his feet for a back-breaking 39-yard catch. Following the blocks of center Ian London and left guard Jon Meeks, Ortega snuck in his second score of the night to put Coatesville back on top, but the extra point went wide.

Coatesville’s Dapree Bryant celebrates after scoring a touchdown in the second quarter against Downingtown West. (Nate Heckenberger- For MediaNews Group)

Coatesville forced a quick three-and-out and went right back to the quick hitches. Ortega completed 22 passes on the night, with an average of 5.6 yards from scrimmage per completion. It was easy picking with West playing back to avoid the big play, and Raider receivers averaged 9.6 yards after the catch on the night. On a second-and-10 from the West 17, Ortega found Bryant on a slant, who made two defenders miss on his way to the end zone. West brought six on the play, but Ortega had plenty of time thanks to an empty set Coatesville would live in the rest of the game, keeping a tight end and wing in to pass block.

West had a chance to respond before the break, but with a fourth-and-one at the Coatesville five, Lewis was stuffed. Out of the I-formation, West tried to catch the Raiders on their heels with a quick snap, but Burgess stifled lead-blocker Hale in the backfield, pausing Lewis, and Meeks was able to track Lewis down from the backside defensive tackle spot. On non-option plays from the I, West ran the ball seven times for just eight yards. Coatesville ran out the clock and went to the break, up 13.

Coatesville did a stellar job covering kicks all night, holding West to an average of 10.8 yard on its six returns, but Williams took the opening kick of the second half 17 yards to the West 36. A pass interference on Bryant on first down, put the Whippets in Coatesville territory, and they started their attack with the veer option. After running it twice in the first half, West ran it three times on the opening drive. It was a read-option on fourth-and-three that made the drive for West, however. Out of one of its favorite formations, with twins right and a tight end, wing on the left, Lewis motioned from the right slot back to Howard, who was in shotgun. Barthmaier perfectly timed his blitz, but he went for Lewis. Howard kept it and ran 16 yards for the first. Four plays later, Howard snuck a TD in from the one.

The Raiders started at their 18 and promptly picked up a first down with Bryant. But an unsportsmanlike conduct penalty pushed Coatesville back 15 yards, and Pelkisson and Waters followed with back-to-back sacks to force a punt from the five. Bryant’s punt was deflected by Hale, and West was back in business at the Coatesville 15.

Out of the spread, Pelkisson got his first offensive touch with a counter that picked up nine. West went back to its seven-man front, with three backs behind Howard, and another veer option picks up the first. West ran the veer 10 times for 48 games on the night. From the two, Howard rolls right out of the same heavy set and scrambles in for the TD.

After kicking deep and pinning the Raiders inside their 20 the previous kickoff, West went with a high, short kick, setting Coatesville up at its 39. Bryant took a handoff on a zone-read after Pelkisson chose Ortega, and he went for eight, tacking on fifteen for a late hit penalty. All the momentum West had quickly shifted to Coatesville, who is at the Whippets’ 38 after one play. With Marcus Gainer playing eight yards off the line, Ortega and Bryant hook up on two straight hitches, to reach the West 10. West resists, forcing a third-and-goal from the 10, and out of the empty set, Ortega keeps it. Pelkisson ducked inside and was washed by Derek Seagraves, allowing Ortega to pick up nine before scoring his third TD on a one-yard QB sneak on fourth. Coatesville runs a speed option to the right on the two-point try, but Bryant is stopped short.

West took over at its own 22 and eventually converts a fourth-and-three to reach the Coatesville 33. A miscommunication on the offensive line gave Jordan Engler a free path to Howard for an 11-yard loss, which is followed by an illegal motion. Howard to Williams nets 14, setting up a third-and-12, but Howard under-threw Lewis on a rollout to his right and Bryant intercepted it.

An illegal block penalty brought the ball back to the Coatesville two, where they got some space with yet another unguarded hitch to Stewart, who caught nine passes for 123 yards. The next play was a QB draw, and with the defensive end upfield, Ortega rushed left, made a man miss and went for 54 of his 61 rushing yards on the game. The Raiders eventually reached the West five, but the Whippets held and for a 27-yard field goal by Pierce Hadzor to keep it a one-score game.

West was forced to punt the next drive, but Coatesville followed with quick three-and-out. Williams took a line-drive punt and raced 49 yards to the Raiders’ 21, with 3:08 left on the clock. Coatesville hunkered down, forcing a fourth-and-four at the 13. After a Raider timeout, West came out with twins left and its tight end wing to the right. Meeks got drawn into the neutral zone, but there is no flag. Instead, there was confusion with the snap count, as only the center and right guard moved on the snap. With the rest of the Whippets flatfooted, Engler and Frank Johnson sliced right through to meet Howard for a one-yard loss.

Two kneel-downs by Ortega later and Coatesville walks away a 29-21 winner.