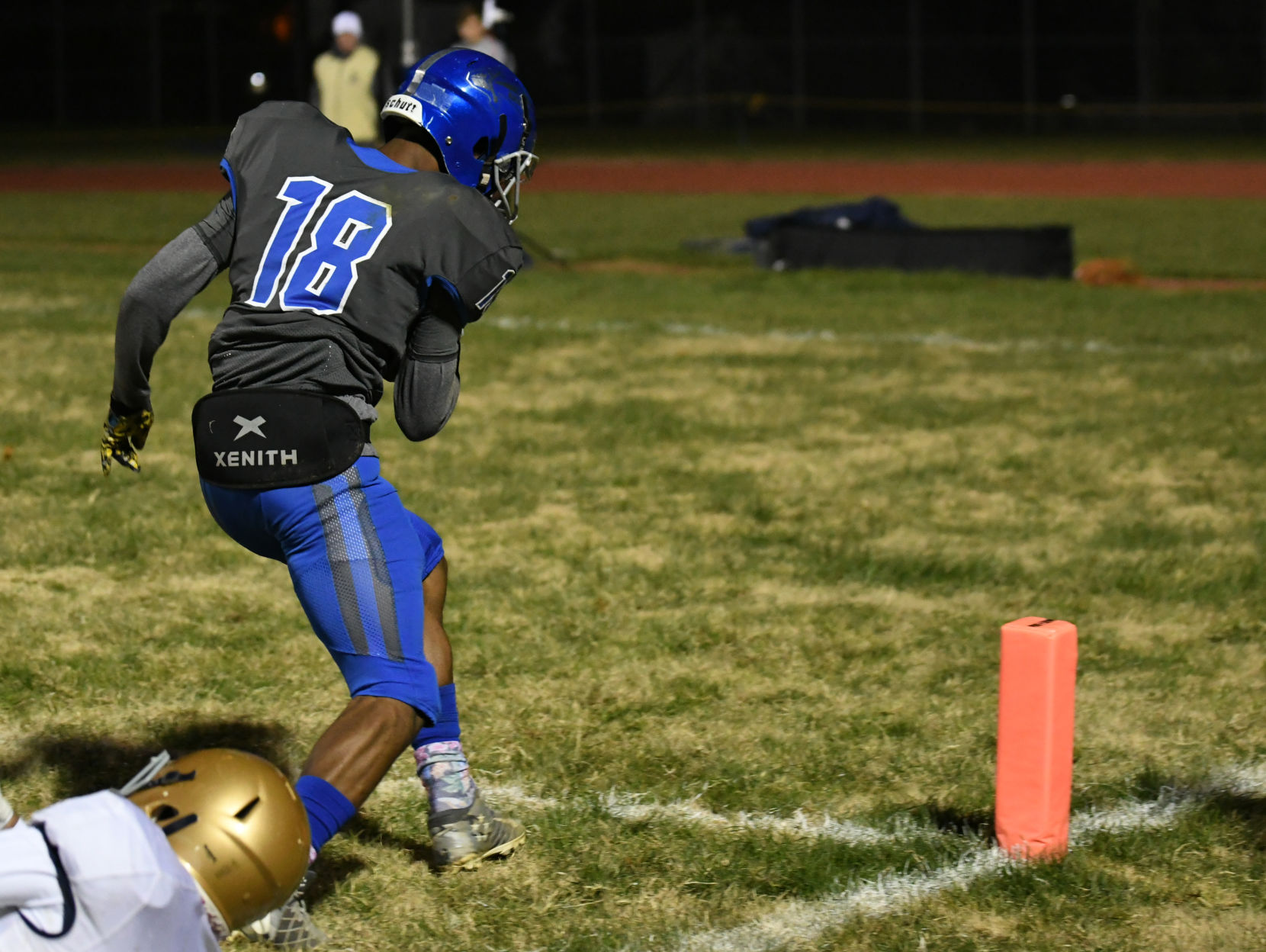 Academy Park receiver Jalen Allen is about to toe the goal line after catching a pass from quarterback Barry Brown Friday night at Knight Park. Allen's two TD catches helped the Knights hold on for a 21-20 victory over West Chester Rustin in a District 1 Class 5A semifinal game. (Mikey Reeves/For MediaNews Group)

SHARON HILL — From outside the Academy Park huddle, as the fourth-quarter clock wound down Friday, there was little doubt where the ball would be headed.

With the Knights nursing a one-point lead over West Chester Rustin, and a bunch of their one-time skill-position starters on the sidelines injured, Barry Brown knew what number to call.

It would be his own, as many times as it took.

“If it comes to me to carry the ball toward the end of the game, that’s what it comes down to,” the Knights’ quarterback said. “This team, we’ve got a lot of players that can do it all, and it just so happened to be me at the end of the game. And I took ownership to it and I’m going to fight for that first down any time I need to.”

With the way that it was working – and in a fourth quarter that turned into a defensive stalemate, “working” was a low bar – Brown had little reason to deviate from the plan.

Brown rushed for 108 yards, threw for 184 and two touchdowns and did absolutely everything asked on the game-management side to will AP past Rustin, 21-20, in the District 1 Class 5A semifinal.

From the time Rustin got within 21-20 with 2:36 left in the third quarter, Brown had the ball on 15 of 18 offensive snaps, either dropping back or on keepers. With top receiving target Alphonso Hayes and running back Devon Covert among the cavalcade of injured Knights, the spotlight shown on Brown, and he responded.

Even when he made a momentary error, fumbling with a short field ahead in the fourth to see Rustin’s Travis Riley recover the only turnover of the game, his resolve was unwavering.

“What went through my head is … the play is over, we’re on a new play,” Brown said. “We’ve got to forget about it, drive down the field and finish the game.”

All Barry Brown, all day. Bulls ahead for 17. Ap ball at the 30. Rustin burns second timeout. 1:18 left. pic.twitter.com/BoBlFJsx2U

He steadied the pace of an unusual game, that went from a third quarter featuring three sustained drives to a helter-skelter fourth, which included six possessions and four punts. When AP got the ball for the final time, with 4:30 showing on the clock, Brown saw the chance to send the Knights to the final. He ran for 17 yards on the first snap, gained six on a third-and-5 at midfield and iced it with a 14-yard run to the 30.

For the day, he rushed 15 times for 108 yards. He completed 8 of 17 passes for 184 yards, starting with a 69-yard flea-flicker to Eric Willis on AP’s first play and a pair of touchdowns to Jalen Allen.

Allen, a sophomore, is one of those players who’s been thrust into a bigger role by injuries. The connection to Brown is evident, as with the 40-yard sideline route that Brown dropped right into his hands inside the 5, allowing him to take the last two steps in stride across the goal line.

“Our relationship is cool, we’re cool outside of football,” Brown said, “and for him to be young and stepping up like this, I love it.”

Brown finds Jalen Allen on 4th down for an 18-yard TD. Great move by the sophomore to get the first down then into the end zone. 2pter fails.
6-0 AP. pic.twitter.com/eropeEHgJT

Academy Park’s injury glut relented somewhat, with Utensee Nankay and Glister Threadgill among those returning. With Nankay, a defensive lineman, it was not a moment too soon given the threat posed by Rustin’s run game.

The Golden Knights (9-4) scored on three consecutive drives in the second and third quarters, all Nick Madonna scores, on the way to 21 carries for 141 yards and 203 team rushing yards.

“It was fun. I loved it,” Madonna said. “I love a good football game like that, and I think it went back and forth because we were both fighting to win a district championship. We both wanted to get it.”

AP threatened to run away early with a 14-0 lead thanks to Allen’s TD catches of 18 and 40 yards. But Rustin answered in the second quarter with a tidy six-play drive, capped by a Madonna five-yard score. It was answered immediately by Malik Johnson returning the kickoff 95 yards untouched for a score to briefly restore the two-score lead with 3:15 left in the half.

But Madonna got that back before halftime with a one-yard plunge, Rustin within 21-14 when Mike McDevitt nailed a 35-yard extra point.

The accuracy eluded McDevitt the next time. Madonna capped a 10-play, 76-yard march with an 11-yard score to pull within 21-20 at 2:36 of the third, but it stayed that way when McDevitt pulled an extra point wide.

Eventually, the AP front seven started to win its battles. With Isaiah Rogers (1.5 tackles for loss) and Xavier Newman leading the push up the middle and the rampant pursuit of Brian Daniels and Brian Erskine (2.5 tlf) on the outside, AP didn’t allow a Rustin first down in the fourth. Nasir Brown came up with a big sack on the first possession, Malic Patterson deflected a third-down pass on the next and a pair of Erskine denials ended the final drive.

“We polished it,” Erskine said. “We’ve been practicing this all week. And we dug in at the end, kept pushing and kept stopping them, stop for stop. No yards. We dug in, and the practice that we did all week kicked in at the end and we perfected it at the end.”

“It’s protect our goal,” Rogers said. “Not let them score at all, hold them, the jets they’re running, follow it. All that stuff.”

Brown did the rest, which gives the Knights another week together.

“I want it all,” Erskine said. “I’m at a loss for words. I want to win districts and then take it all the way to states. We’re going to take it all