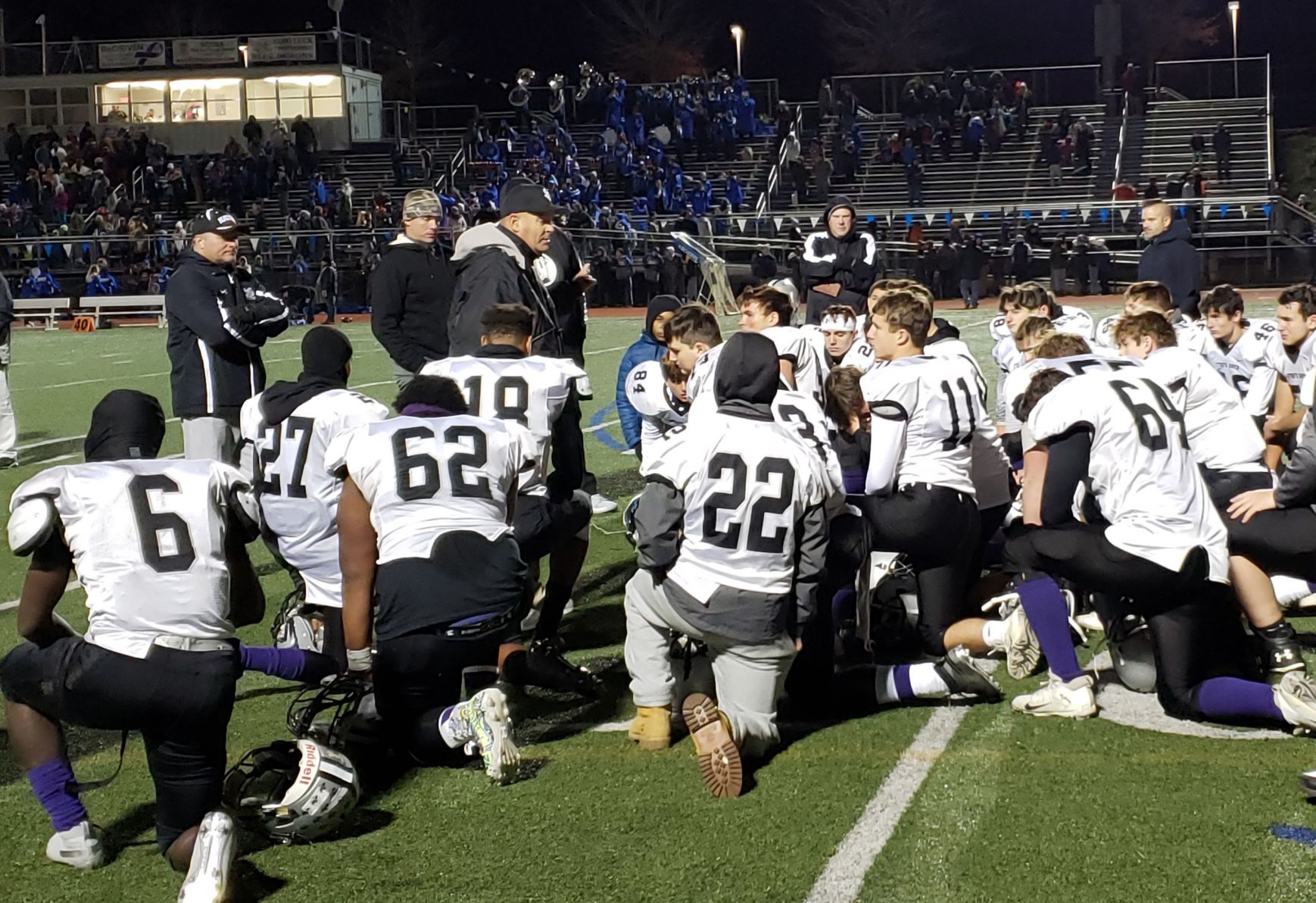 Strath Haven head coach Kevin Clancy faces his team with one last post-game talk Friday night after the visiting Panthers went down in overtime to Kennett, 20-14, in a District 1 Class 5A quarterfinal game. (DFM File)

KENNETT SQUARE — On an Arctic night in a locale known for mushrooms, just two out of a grand total of 107 fairly entertaining plays decided which team would advance to the District 1 Class 5A semifinal round.

They were the final two plays of overtime.

On this frigid Friday it sure looked like John Prochniak broke the plane from one yard out as he’d done twice in the game for Strath Haven, seeded fifth in the district. The officiating crew took its time making a decision. When the bodies were unstacked, the ball was at the goal line. Just like that, it was Kennett’s chance to win the game.

“I thought I was in but I guess I was short,” said Prochniak, who rushed for a game-high 140 yards. “It’s hard to tell when you have that many guys in there. That’s all I can say on that.”

In the PIAA overtime format, teams have four downs to score from the 10-yard line via touchdown, field goal or a defensive play. Then the other team gets the same opportunity.

Kennett, the fourth seed, thought better of trying a field goal on first down with the football feeling like a frozen brick. Blue Demons quarterback Sam Forte dropped back, then took off on a draw play, slicing this way and that through the interior of the defense before twisting over for the touchdown and a 20-14 triumph.

It will be tough for Panthers coach Kevin Clancy to watch the replay, particularly from the press box angle on the overtime stop of Prochniak.

“I thought we could punch one in,” Clancy said. “We just came up a little bit short – I guess. We run that play a lot of times and we’re going to make touchdowns with it. He’s gotten a lot of touchdowns on that play. It just didn’t come up that time.”

The Panthers (9-3) never led in the game, although they didn’t trail for long, either. They took a shot at the end zone late in regulation, Jack Ryder’s pass on target but falling incomplete. Emmet Young was short on a 41-yard field goal attempt that would have won it.

The Blue Demons (11-1) scored on their first possession, Forte connecting with Tommy Patrissi for a seven-yard touchdown.

Prochniak knotted the score with a 10-yard run to leave the teams deadlocked at 7 entering the second quarter.

Prochniak tied it again with a three-yard run with 6:10 remaining in the first half, and that was the end of the scoring until the final play of the extra session.

“The kids battled hard,” Clancy said. “Our kids have nothing to be ashamed of. They played their butts off out here against a good team. The kids, all the kids but the senior class in particular, the character and leadership they had was amazing. It was outstanding. We’re going to miss this senior class a lot. The grittiness, the character, the toughness, that stuff is all there. You get in a game like this with another good team and you make one more mistake or something like that and that’s what happens.”

The Panthers gathered one last time this season to listen to their band play the old alma mater song. It was impossible for players to hold back the tears. And there’s a reason for it.

“It hurts,” Prochniak said. “I’m going to miss the little things like lifting with my teammates. Running out on the field with them. Gutting everything out with them. I’ll just miss it for the rest of my life. I love this team, I love this program and these coaches, this community. And I’ll never forget it.

“I’d like to say that we brought this program back to the standard of where it should be. And I know the younger guys will keep that success going.”

Fair or unfair, just two plays out of 107 ended a fine season for the Panthers.