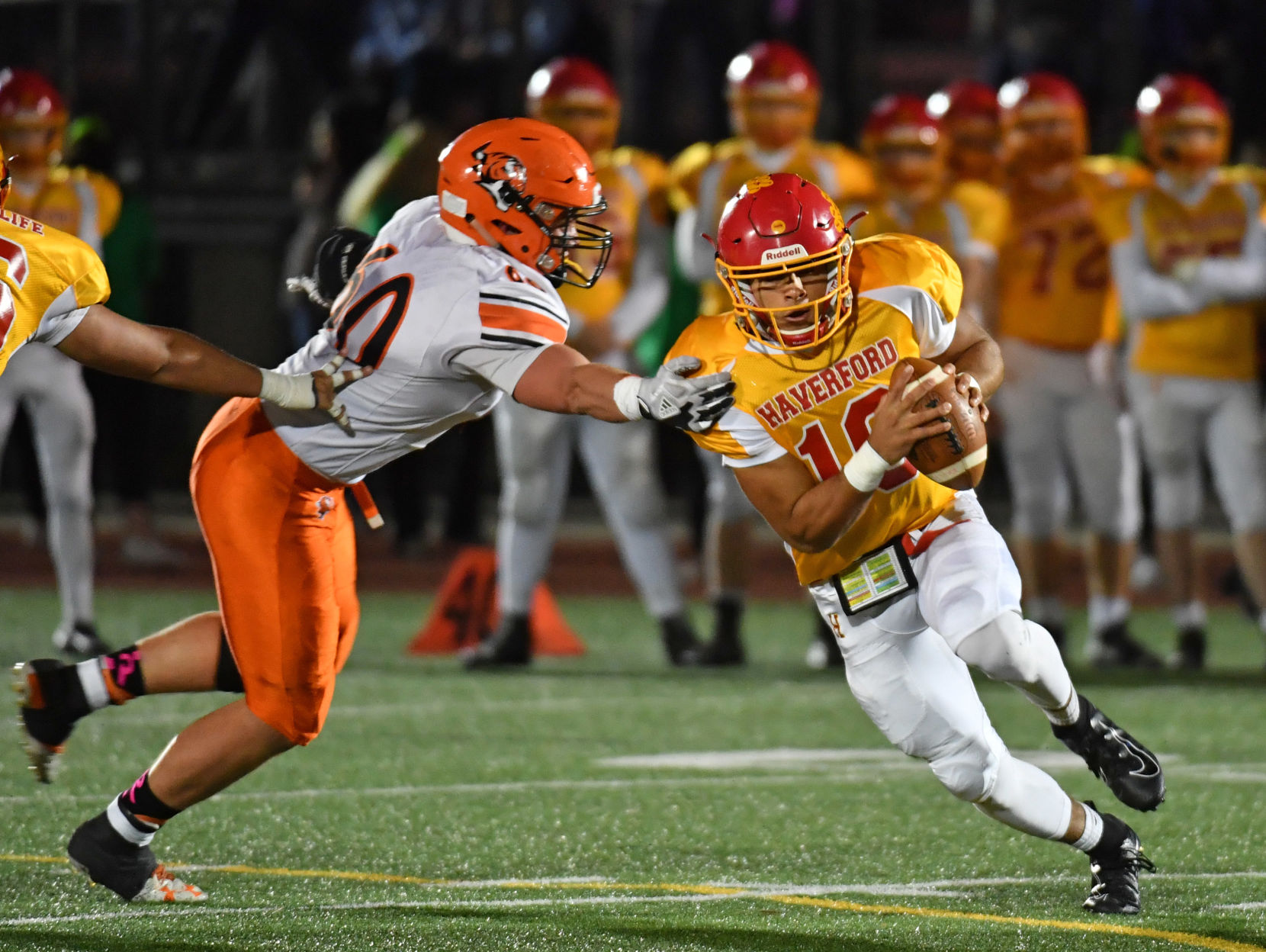 Haverford quarterback Trey Blair, right, in action recently in a win over Marple Newtown, suffered a hip pointer Saturday but had already done enough damage for the Fords to have a big lead on Downingtown East. They went on to a 39-15 victory that puts them in the District 1 Class 6A semifinals next weekend against Downingtown West. (DFM File)

DOWNINGTOWN — Trey Blair was forced out of bounds after a 24-yard scramble late in the second quarter. The Haverford senior promptly helped Downingtown West defensive back Dylan Jones, who slammed into the chain-linked fence on the sideline at Kottmeyer Stadium, back onto his feet in an act of good sportsmanship.

Blair limped back to the bench, however, and was limited the rest of the way Saturday. Sophomore quarterback Andrew Maginnis stepped in and threw a three-yard touchdown pass to Justin Burgess, the Fords’ fifth touchdown of a dominating first half of football.

Blair suffered a hip pointer, returned for one series in the third quarter, and then sat back and watched the Haverford defense dominant.

The underdog Fords bludgeoned another favorite in the District 1 Class 6A tournament, this time by a 35-12 final, and will return to the same site next week to play No. 1 Downingtown West in the semifinals.

Hi there. This might be hard to believe but Trey Blair scored a touchdown on @fords_football‘s opening possession. 54 yard run. 7-0 1Q 8:24#Delcofootball pic.twitter.com/UnvV7B9hZH

You better believe Blair will be healthy and ready to play.

“He can sit out of practice all week,” senior linebacker Will Higson said, half-jokingly. “We know he’ll be good for next week.”

After star running back Stanley Bryant, the second-leading rusher in Chester County, scampered 54 yards to paydirt in the first quarter, the Fords’ defense awakened and played their usual brand of bone-crunching football.

“We just knew we had to come out and play one way, the way we know how to and we had to be tough animals tonight,” said Reynolds, who hauled in a 26-yard touchdown pass from Blair in the first quarter. “We knew we had to stop 21 (Bryant), he’s a real good back. We had to let our linebackers do our thing and make tackles.”

The Cougars (10-2) ran a hurry-up offense throughout the game, which explained the Fords’ shaky start on the defensive side of the ball. Defensive coordinator Dan Milewski quickly got his boys up to speed and the Fords made life miserable for Person, Bryant and the Cougars’ offensive line.

Andrew Maginnis throws a TD pass to Justin Burgess with 5 seconds left in the first half. Blair was banged up on the previous play.

“We just have athletes all over the field. It’s nice when we play angry and tough.”

O’Neill had a timely sack in the second half and was excellent at hurrying the quarterback. Big lineman Harry Carpenter had an interception that he nearly returned to the house. Tommy Caruso subbed for Blair at cornerback and played shutdown defense. Jimmy Callahan also flourished in the defensive secondary.

“We know when Trey went down, we all had to step up,” O’Neill said. “It feels great.”

This was an all-hands-on-deck effort by the Fords (10-2), whose defense has allowed no more than two touchdowns in a single game since the team’s last loss Week 2 at Garnet Valley.

“When somebody like Trey goes down, it’s up to everyone to step up and play a bigger role than themselves,” Higson said. “And we really came together as a team.”

Blair darted 54 yards to the end zone on Haverford’s opening series. Bryant’s TD was followed by a blocked extra point. Blair then returned the ensuing kick 95 yards for a touchdown to make it 14-6 Haverford. Later in the quarter, Blair picked off Person to set up his 26-yard scoring connection with Reynolds to give the Fords a 21-6 advantage.

In the second quarter, the Fords operated with a short field and Blair made the Cougars pay once again. His third touchdown was a one-yard sneak to put Haverford ahead 28-6.

Trey Blair sneaks into the end zone from a yard out. My man Beef Weelington with the extra point. 28-6 @fords_football 8:47 2Q#Delcofootball pic.twitter.com/uWut8y0ypN

Blair could have returned, he said, but only if things got dicey in the fourth quarter. Haverford’s defense made sure Blair could take it easy and look ahead to getting 100 percent healthy for next week.

“Before the game I told the team, ‘Listen, they can compare me to superheroes and stuff and that’s what other teams are going to think, that we’re a one-man team and they will think I’m the only player on this team.’ I said that’s disrespectful because I have the utmost respect for all my guys,” Blair said. “Little did (Downingtown East) know that I have a bunch of angry dogs around me and they will do anything they need to to win. They definitely showed it tonight.”