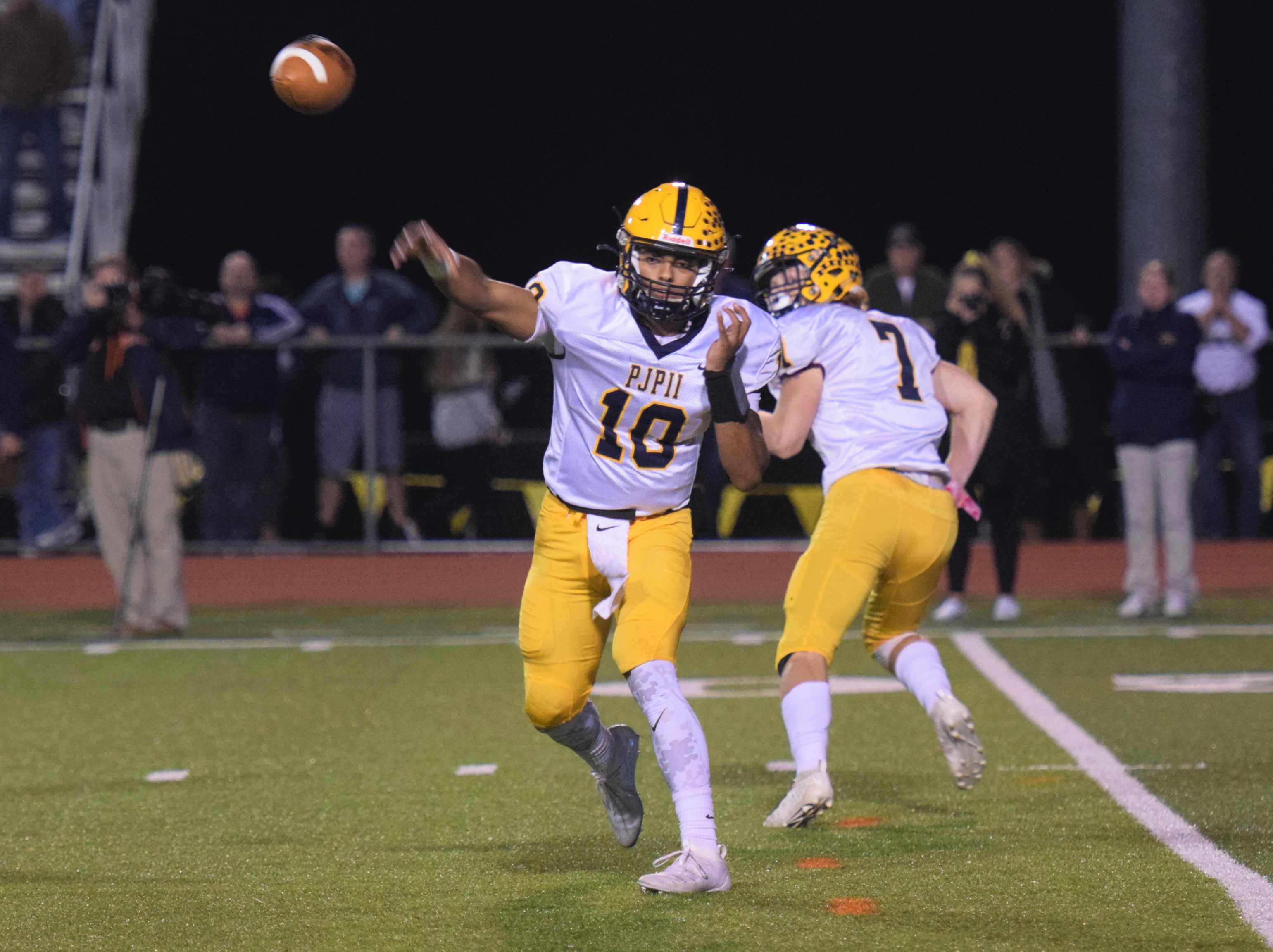 The Golden Panthers won the Pioneer Athletic Conference Frontier Division, played in the conference championship and now are looking to make it even greater with a district championship.

Pope John Paul II (9-2), the No. 2 seed, has top seed and unbeaten Neumann Goretti (11-0) standing in the way of that pursuit. The pair meet in the District 1/12 Class 3A championship game Friday night, 7 p.m. and the South Philly Supersite, located at 10th and Bigler Streets in Philadelphia.

A deeper look at the matchup:

Overview >> The limited selection of Class 3A schools in the greater Philadelphia area necessitates a single, combined bracket for District 12 (Philadelphia) and District 1 (consisting of the four surrounding suburban counties) for one berth into what becomes a 16-team PIAA tournament.

The matchup, on paper, pits two teams with similar profiles whose Friday motivations may be slightly different. PJP hopes for a district title as the cherry on top of their remarkable program turnaround, while Neumann Goretti hopes to becomes the 3A complement to their Catholic League brethren such as St. Joseph’s Prep, La Salle College, and Archbishop Wood who’ve dominated 5A and 6A football in Eastern Pennsylvania in recent years. When Pope John Paul II has the ball >> As with most 3A teams, both PJP and Neumann Goretti use their best athletes on both sides of the ball. There are exceptions, such as PJP’s Kamal Gray and Neumann Goretti’s Tysheem Johnson, who we’ll get to in a minute.

Everything for the Golden Panthers’ attack runs through senior quarterback Gray, whose two years at the school have produced a completely rewritten offensive record book and one of the area’s most prolific offenses. This year, Gray’s completed 64 percent of his passes for 2,328 yards while firing a PAC-high 34 touchdown passes to only seven interceptions. He’s also rushed for 500 yards at about eight yards per carry and another 5 TDs. His mobility in and out of the pocket gives defenses one more area for concern.

The rest of the Golden Panthers’ running game is a committee approach, with Andrew McDonald (472 yards, six TDs) pounding the rock between the tackles and Daylin Gooden (315 yards on only 34 carries, three TDs) providing the big-play threat. Chris Bruder and Steele DePetrillo see carries for the Golden Panthers as well.

But the bread-and-butter for this offense is the passing game. A little more than half of Gray’s completions have been to the tandem of big-play weapon junior Justin Kormos (38 catches, 847 yards, 9 TD) and sure-handed senior Steve Skarbek (43 catches, 519 yards, 7 TDs). Both receivers are also threats in the running game, as PJP regularly incorporates jet motion into their formations that can turn into sweeps, end-arounds or even the occasional trick play. McDonald’s 32 catches have gone for an average about 14 yards per, proving he’s more than a safety valve out of the backfield, while Bowling Green-bound TE/DE Dylan Walker (26 catches, 382 yards, 9 TDs) is a game changer in the red zone.

Seniors Matt Dobrowolski and Sean Anderson provide leadership and consistency up front on both sides of the ball for the Panthers, and figure to have their hands full this week on offense as they face a Neumann Goretti defense loaded with talent in the front seven. The Saints feature difference makers at every level of their defense, starting with sophomore linebacker Anthony Johnson, featured among the Top 100 prospects for the Class of 2022 and boasting over a dozen scholarship offers already. Johnson typifies the “fast to the football, bringing lots of pressure and fundamentally sound tacklers” profile PJP coach Rory Graver affixed to the Neumann Goretti defense.

Providing a great deal of that pressure is junior defensive end Eric Gentry, a 6-foot-7 defensive end with interest from Oregon and Temple, who figures to be one of those players whose recruiting profile takes off in his last couple years of high school – not that he’s by any means unknown at this point. Able to create disruptions via his speed and height, Gentry’s job will be to force Gray to make quick decisions, or collapse the pocket so Johnson, Roman Brown, and Isaiah Gaddy can clean up on the inside.

Outside linebacker Ronald Holmes and strong safety Ubayd Steed anchor the secondary for the Saints with a combined seven interceptions. Holmes has an offer from Delaware State, while Steed has drawn interest from several FBS programs.

When Neumann Goretti has the ball >> The Golden Panthers’ turnaround from a couple of one-win seasons a few years ago has been one of the feel-good stories of recent years in the PAC. Neumann Goretti knows the feeling, as the program actually cancelled its last several games in 2016 due to a lack of interest. Holmes, as well as DL Brown and WR Damian Gabriel were freshmen at the time and were soon joined by new coach Albie Crosby and a few key transfer students – plus one game-changing superstar.

His name is Tysheem Johnson. He’s a junior now, and his scholarship offers read like a Who’s Who of college football. Florida, Michigan, Ohio State, and Penn State are all competing for the services of Neumann Goretti’s leading rusher (1,269 yards at 7.2 yards per carry, 19 TDs), receiver (28 receptions at 18.7 yards per catch, three TDs), and kick returner (one kickoff and two punts returned for scores.) Johnson is a legitimate scoring threat every time he touches the ball, so it speaks volumes for the abilities of senior Malik Griffin that the Saints split carries about 60/40 between the duo, with Griffin averaging almost six yards per rush on about 100 carries this year.

Talented sophomore Marqui Adams takes the snaps and controls this talent-laden offense quite ably, completing a little under 60 percent of his passes (88-of-150) for 1,424 yards and 13 scores on the season. Adams can tuck it and run a little himself, with four scores on the ground this season.

The entire operation is anchored by junior center Jon Fagley, joined up front by Isaiah Gaddy, featured in the defensive section and guard Christian Lott. The clear preference for this offense is to beat you with their speed and power in the running game, but the pair of running backs and Gabriel can stretch defenses both vertically and horizontally.

Leading the effort to try to slow the Saints will be PJP’s all-everything linebacker Justin Mitala. For all the sparkling profiles on the Neumann Goretti defense, no one matches the pure productivity of Mitala’s 130-plus tackles and 30 stops for loss on the year. Mitala will have his hands full keeping up with Johnson and Griffin all night, but his leadership and experience could prove valuable if he’s able to bait the young QB Adams into a mistake or two. Up front, Dobrowolski, Anderson, and Walker do yeoman’s work up front for PJP, and Steele DePetrillo joins Mitala among the linebacking corps. Skarbek, Kormos, McDonald, and Gooden all feature in the Golden Panthers defense as well, a unit that held opponents to a total of 22 points during an eight-game winning streak earlier this season.

Special Teams >> Jacob Snyder handles the kicking duties at PJP, while Dylan Walker and Kamal Gray both feature as punters depending upon the situation. Neumann Goretti guard Lott pulls double duty as kicker/punter for the Saints. Again, the main attraction in this part of the game features to be Tysheem Johnson, who’s taken three kicks all the way back this season. He’s joined by Malik Griffin on kick returns and handles most punt returns.

Daylin Gooden, Skarbek and Kormos are all options in the return game for PJP but have had few opportunities for big plays this season.

Details >> It’s easy to be inspired by both teams’ background stories, PJP claiming the PAC Frontier and reaching both the league and now district title game after so many season of struggles, and Neumann Goretti reaching the pinnacle after nearly folding their program just three years ago. No doubt coaches Graver and Crosby will have some similar stories to tell when they meet in the pregame.

Neumann Goretti was ranked No. 8 among 3A teams in Pennsylvania in one recent poll, but most list the Saints among the front runners for a trip to Hershey on December 6 for the state championship game. To end that dream, Pope John Paul II’s offense will have to be clicking on all cylinders – as good as the Golden Panthers’ defense has been, it’s unrealistic to think they will completely stop the Saints’ attack. On the other hand, the Saints haven’t seen a passing game quite like the challenge Kamal Gray and PJP will present on Friday.

Typically, the conventional wisdom would dictate that PJP attempts to hold the ball for long stretches, tiring out the Saints’ defense on what promises to be a cold night while keeping Tysheem Johnson and his explosive teammates locked on the sideline. But that’s not really the way the Golden Panthers play. Instead, the call here is for both sides to come out with guns blazing, and for PJP II to acquit themselves quite nicely as legitimate contenders before Neumann Goretti’s overall explosiveness wins out in the late going.