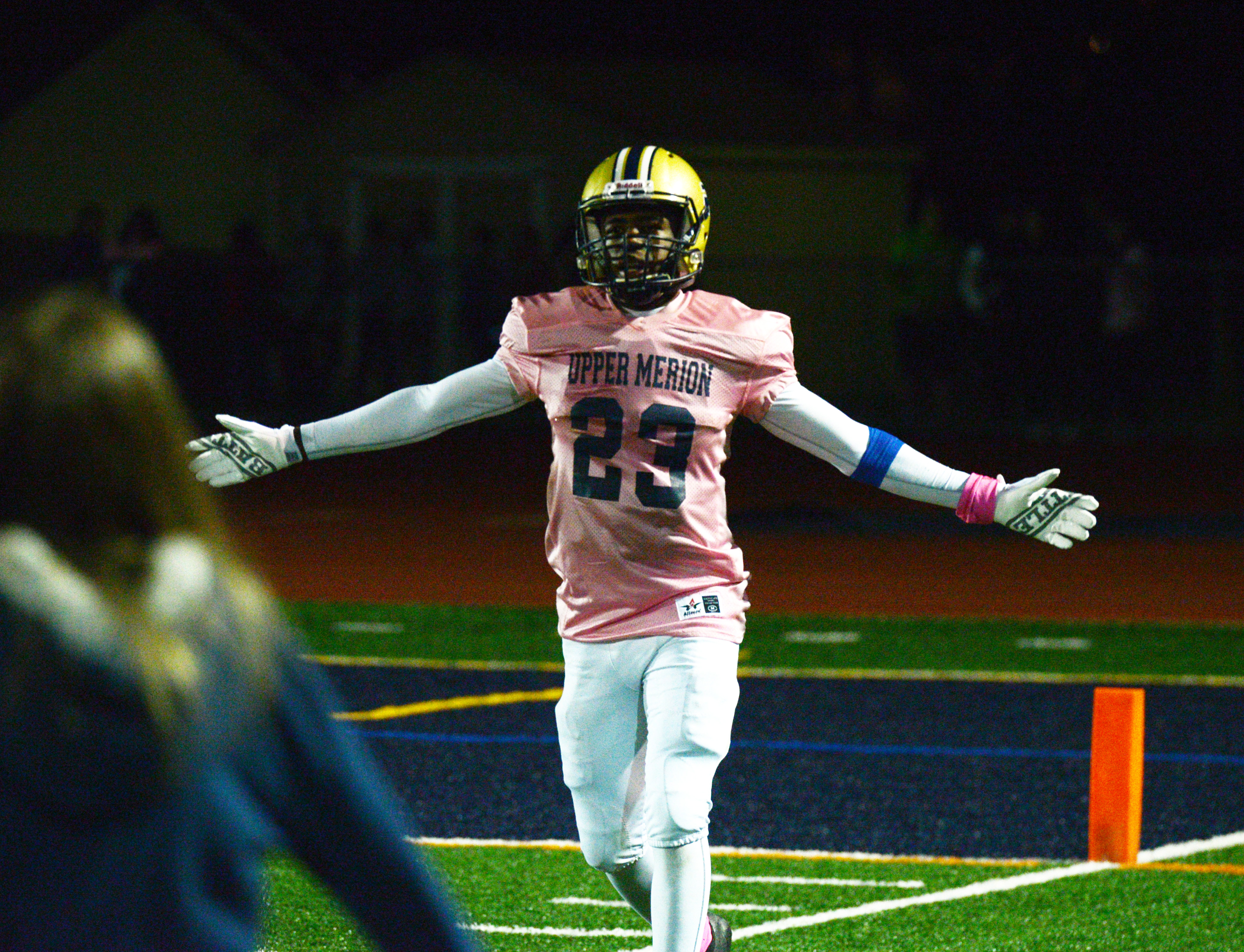 FAIRVIEW VILLAGE >> Upper Merion rushed for more than 250 yards in the first half Friday night at Methacton and that pretty much tells the story as the Vikings tuned up for the district playoffs with a 38-14 Pioneer Athletic Conference crossover win.

Anthony Swenda ran for 145 yards and two touchdowns while going over the 1,000-yard mark for the season, Taiyan Lobban rushed for 92 yards, and Marc Clayton chipped in 78 yards on the ground for Upper Merion (5-5). Mike Torcini ran for 50 yards and a score, and Mike Merola passed for 110 yards and a TD to Brian Dickey for the Warriors (3-7).

Swenda needed 96 yards to reach the milestone and got half of that with a 48-yard touchdown run in the second quarter.

“It’s amazing,” said the 6-foot, 184-pound senior running back and linebacker. “Last year, I was thinking about not playing. Then I went to an Eagles’ practice. Everyone on the O-line. It’s the O-line that did it. Not me.”

Methacton recovered an onside kick to start the game, but turned the ball over on downs at the Upper Merion 19-yard line, and the Vikings drove 81 yards in seven plays with quarterback Dale Clayton sneaking into the end zone from the one.

The Vikings also scored on their next three possessions on TD runs of seven and 48 yards by Swenda and three yards by Marc Clayton after he ripped off a 62-yard run earlier in the drive. Swenda ran for two points after all three of those scores for a 30-0 lead at the half.

Upper Merion finished the half with 253 rushing yards on 25 attempts.

“We went in at halftime and I don’t know if the kids were trying too hard,” said Warrior coach Dave Lotier. “We were not ourselves in the first half. Penalties … missing throws. We told them we can put our tails between our legs or we can go out there and execute and go out with our heads held high. It’s a credit to the seniors that we were able to win the second half.”

Swenda, who caught Dale Clayton’s only two passes of the night for a total of 25 yards, wound up with his 145 rushing yards on just 14 carries. Lobban also carried the ball 14 times for his 92 and Marc Clayton racked up his 78 on only four tries.

“It’s been that way all this year,” said Swenda. “Ty is one of the best runners I’ve ever seen. Marc gets five yards every time. He doesn’t stop. Dale comes through a lot with his throwing. He does a good job when he needs to.”

Even when the offensive line did not open big holes, those three backs still managed healthy gains of four to seven yards while averaging nearly eight per carry on the night.

“That’s been really important,” said Brown. “Everyone wants to get their 100 yards on two plays. They’ve started to understand a four-yard gain is a good gain.”

“They’re much better than their record,” Lotier said concerning the Vikings. “They wanted it tonight. They’re hard-nosed kids.”

Lobban wrapped up the Upper Merion scoring with a 10-yard run midway through the third quarter and then ran for two points. But Methacton came right back with a 43-yard drive to get on the board via a 17-yard pass from Merola to Dickey in the left corner of the end zone. Torcini ran two yards to finish a 55-yard drive in the final quarter.

“A lot of potential,” Lotier said concerning his players. “Not long ago, Methacton lost 20 games in a row. They’ve come a long way. We took another step. I’m happy with the way the program is headed.”

Upper Merion is currently No. 12 in the District 1-5A power rankings, with 16 teams making the playoff field.

“The second year in a row,” said Brown. “We’re proud of that. It will be interesting to see who we play in the first round.”