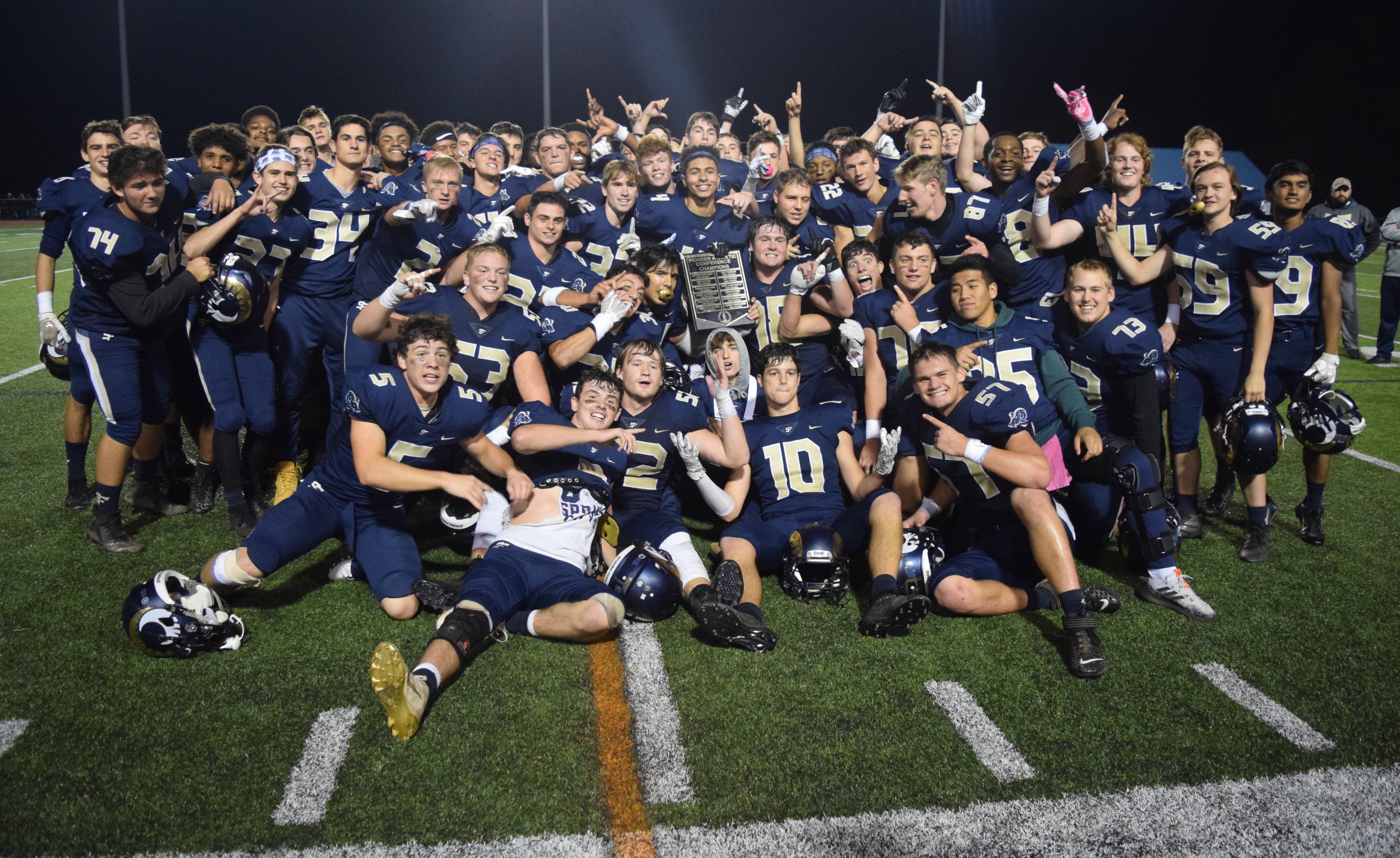 ROYERSFORD >> It wasn’t a virtuoso performance by any means.

But it ended in victory nonetheless, and that above all tells the story of the 2019 Pioneer Athletic Conference champion Spring-Ford Rams.

Armante Haynes bounced back from two first-half fumbles to rush for 167 yards and two touchdowns, the second of which gave the Rams a lead they’d never relinquish in a 38-21 victory over Pope John Paul II in the PAC championship game at Coach McNelly Stadium on Friday night.

The win gives the Rams the PAC title for the first time since 2015, ending Perkiomen Valley’s three-year reign since the league went to a two-division format.

The way the Rams got there tells the real story of their season-long journey.

Spring-Ford turned the ball over three times before halftime, allowed a few big plays and missed some early scoring opportunities. In past years, such mistakes have snowballed at times for Spring-Ford, leading to some late-game collapses, most notably last year against Perkiomen Valley with a trip to the title game on the line.

But this year, Spring-Ford bounced back to control the second half, holding the Golden Panthers scoreless after the break and allowing only 78 total second-half yards.

The defense was energized by the returns of senior linebacker James Albert and defensive tackle Donnie Nicoline from injury as well as safety Nick Teets returning from a one-game suspension. Blake Terrizzi and Ryan Kolander were their usual disruptive selves along the line, frustrating the Golden Panthers offense following a 21-point second-quarter explosion that turned a 14-0 Rams lead into a 21-all tie at the break

“I felt good going into my doctor’s appointment (that I’d be cleared),” said Albert. “I was confident, and I knew I’d be ready to go.”

Spring-Ford coach Chad Brubaker challenged a few of his players at halftime.

“I thought we were a bit passive,” he said. “Rather than hearing ‘we need to take back control of this game,’ I was overhearing things like ‘I can’t believe that (second quarter) happened.’ You might say I was a little vociferous about being proactive and taking control.

“We need to do a better job, when we have a team on the ropes, of staying on them.”

It worked, according to Terrizzi.

“We told ourselves we needed to step up,” he said. “We couldn’t let this opportunity get away as seniors. It’s the only time we’ll ever play for the PAC championship.”

“That’s what makes it special – it’s been a little while,” agreed Brubaker. “We’ve come up short in some big games the past few years. But we came through those trials.”

Perhaps no one overcame trying times on Friday night quite like running back Haynes, whose two first-half fumbles along with PJP’s Rocco DiRico intercepting Ryan Engro set up the Golden Panthers’ second-quarter rally. After Spring-Ford jumped to a 14-0 lead on two short-field drives punctuated by Engro TD runs, PJP quarterback Kamal Gray got the Golden Panthers on the board with an eight-yard TD run early in the second.

Haynes responded with a bruising 30-yard score to make it 21-6, but his second fumble allowed the Golden Panthers to cash in with Gray finding an open Andrew McDonald in the flat to cut the lead to 21-14. The DiRico interception culminated in a seven-play drive that finished with a three-yard touchdown pass on a brilliant misdirection play to tight end Dylan Walker to pull the game even at halftime.

“The turnovers were killing us,” said Engro. “But we got back to running the ball with great success after halftime.”

Brubaker didn’t hesitate to put the game in the hands of his two seniors, Engro and Haynes. Although the quarterback only attempted six passes after halftime, he completed four of them including a late touchdown to BJ Beard. Meanwhile, Haynes continued churning out the tough yards on the ground, capping an eight-play, 69-yard drive with an 11-yard touchdown run – his second of the game – to give the Rams back the lead at 28-21 late in the third quarter.

“(Haynes) was moping a little bit, and I got on him about it,” Brubaker laughed. “But that’s a great lesson. Mistakes happen – I know I made a few of them tonight. I just told him to get back out there.”

“(My teammates) were trying to lift me up,” said Haynes. “Those are the guys who make it all worth it.”

Another long drive (13 plays) that spanned much of the final quarter appeared to end in a third Haynes touchdown, but the referees conferred and ruled him down about half a yard short. Alex Nadeau, filling in for Grant Sillyman, kicked a 25-yard field goal with 3:08 to play to give Spring-Ford a two-score advantage. After a turnover on downs, Engro hit Beard for a 30-yard score with 1:58 left, and the celebration was on at McNelly Stadium.

“It was emotional,” allowed Engro. “I’ve never even made it to a PAC championship in my first three years. We battled through a tough first half, came out on top – now it’s time to make a district run.”

Blaize Scarcelle (13) and the Spring-Ford football team run off the field after turning Pope John Paul II over on downs late in the fourth quarter Friday. (Austin Hertzog – MediaNews Group)

While district playoff seedings and pairings won’t be official until Sunday afternoon, preliminary power rankings show Spring-Ford and Pope John Paul II (both 8-2) poised to host opening-round matchups at home in the Class 6A and Class 3A brackets, respectively.

For the Golden Panthers, it was the fourth straight year dropping a crossover matchup against the Rams, but by far the most competitive of the encounters. Kamal Gray finished 17-for-30 for 191 yards and a pair of scores, connecting on a few highlight-reel plays with junior wide receiver Justin Kormos (four catches, 87 yards). Steve Skarbek had six receptions for 65 yards, while Justin Mitala led a gritty defense with about a dozen tackles in his first PAC championship game.

“Our guys competed their tails off tonight,” said PJP coach Rory Graver. “They should be proud of themselves – hats off and congratulations to Spring-Ford.”

Graver says his team is past the point of taking much of a moral victory out of hanging tough with a 6A team. “If we execute better, maybe we’d have had a shot at the end there,” he said. “But that doesn’t take away from the pride I feel in our guys.”

The night would belong to the Rams and in particular, their 18 seniors honored before the game. They’ll go down as the team who brought Spring-Ford back to the top.

“You’re working with 70 kids between ages 16 and 18, trying to get them all on the same page is not always easy,” said Brubaker. “But you look at them in the locker room now – they’re laughing, having a great time. We get on them, but at the same time we tell them to have fun. This is the best time of their lives, and it makes this one really special.”