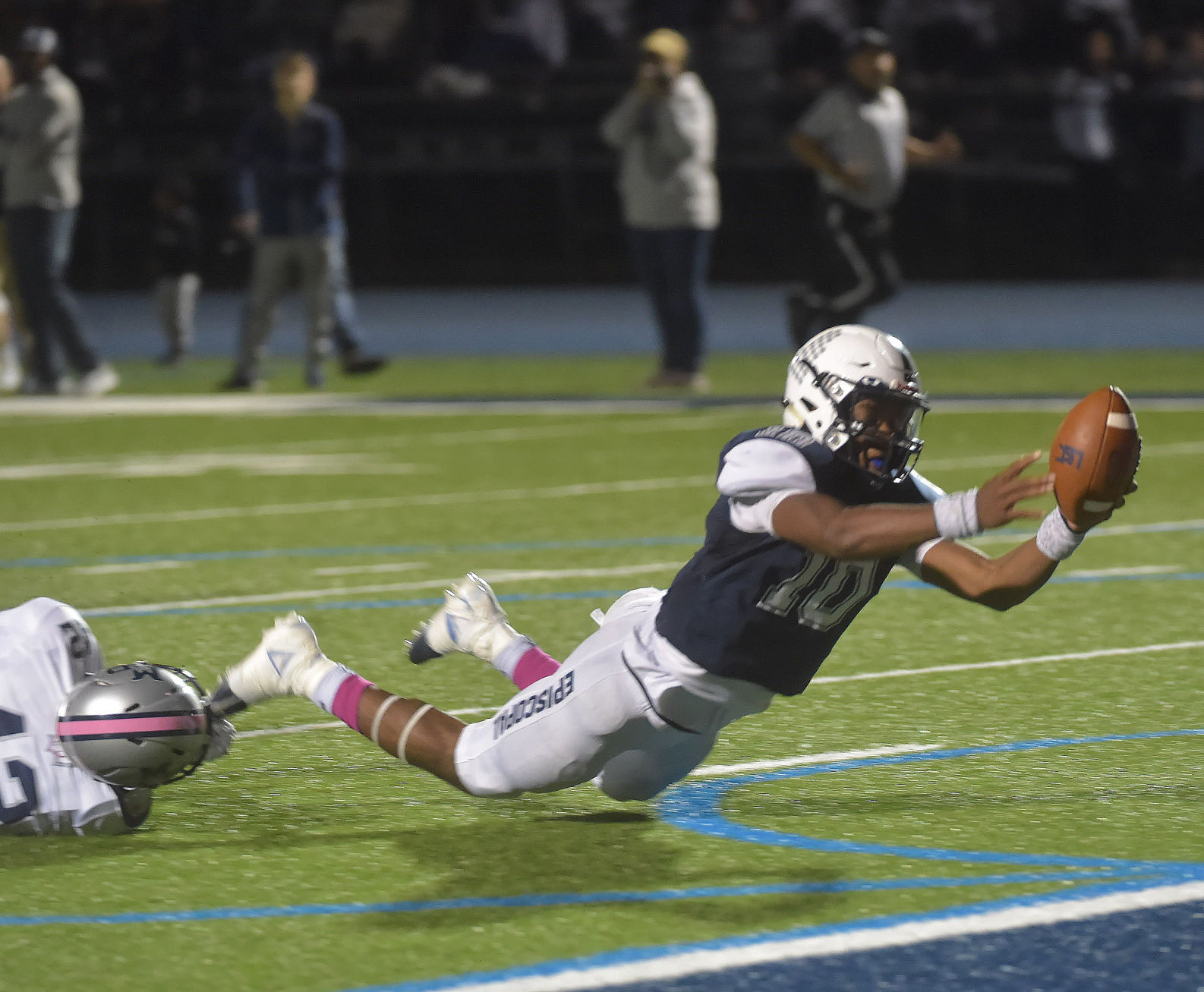 Two weeks back, it was a last-second touchdown pass from McDaniel to Malcolm Folk to beat Penn Charter.

Six days ago, McDaniel overcame a minor neck injury, rushing for both the game-winning touchdown and two-point conversion in a victory over Springside Chestnut Hill Academy.

Friday night, EA faced mighty Malvern Prep, which hadn’t lost an Inter-Ac League game since Oct. 14, 2016. It was Episcopal that did the honors that night. The Churchmen won it on a 29-yard field goal off the foot of Connor Ringwalt. The ball smacked off the left post and went over the crossbar with no time left on the clock.

Since that memorable day in Episcopal Academy lore, the Friars have run roughshod over their Inter-Ac foes. The reigning three-time champions met their match Friday night at Newbold Smith Field before a raucous, bi-partsian crowd.

With an exciting, 29-27 victory, Episcopal reminded everyone in attendance that it is the team to beat in the Inter-Ac this year.

McDaniel completed 14 of 18 passing attempts for 128 yards and three touchdowns. On the ground he amassed 144 yards on 28 carries. The highest-rated passer in Delco coming into the weekend, the senior was simply incredible.

“Every game we have to come out as if it’s the Super Bowl,” said McDaniel, who eclipsed the 1,000-yard plateau (1,034) on the ground. “With these guys, we work so hard throughout the week to prepare. We knew it was going to be close in the end, we just knew we had to make big plays and everyone was executing on the offensive and defensive side.”

EA led 21-20 at halftime and after three quarters. It dominated time of possession in the second half, running 39 plays against Malvern’s 15. The Churchmen trimmed nearly eight minutes off the clock on the opening drive of the third quarter, which ended with a punt. But the damage was done. After Malvern was forced to punt, the Churchmen went on a 13-play, 58-yard drive that resulted in a 12-yard scoring connection from McDaniel to Matt Bush. McDaniel sneaked into the end zone for the two-point conversion to make it 29-20.

Facing a bigger, stronger and arguably more athletic defensive unit in Malvern, the Churchmen racked up 24 first downs and averaged 6.2 yards per play.

“They’ve been the reigning champs for so long and they haven’t been beaten in three years, which was us when we were freshmen. We just wanted to feel that taste of victory over them and it feels great,” senior center Paul McLaughlin said. “Our whole team, we’re a family and we love each other. We have that dedication … and we want to drive on every play and drive the ball down their throats. We’re tough. We might be undersized, but we’re tough and we don’t ever quit.”

EA’s defense was tested. It gave up a touchdown two plays into the game, a 48-yard jaunt by dynamic junior quarterback Lonnie White, who was the centerpiece of the Malvern offense all night.

Episcopal’s Billy Adams dives for a touchdown against Malvern Prep in the first quarter of the Churchmen’s 29-27 win Friday night.

But EA’s big nastys on the defensive line as well as linebackers Bush, Billy Adams and Dylan DiBeneditto found ways to keep White, who ran for 81 yards on 14 carries but only 31 yards after his 42-yard scoring scamper 50 seconds into the first period, in check.

“I think one of the biggest challenges for us is replicating the speed of the opponent’s offense,” EA coach Todd Fairlie said. “A player like that (White), how can you do it? One guy we said we’ve got to stop, it didn’t go so well there at the start of the game. One of our goals every week is to not give up a touchdown on the first drive of the game. So, you take it for what it is. From there, the defense made plays and I felt like from then on it was really contested. They obviously have a lot of talent and that kid is special, but we hung in there.”

Malvern showed its championship pedigree with a fight to the bitter end. Down nine points with five minutes to go, White connected with Ryan Maquire on a 47-yard pass. Two plays later, White was into the end zone and suddenly EA’s lead was down to two points.

Maurcus McDaniel connects with Matt Bush for the @EA1785_Football touchdown. What a drive!

The Churchmen respond to adversity like no other team in the county and they did so again Friday. They successfully ran out the clock thanks to a 26-yard run by Adams (12 carries, 65 yards). Moments later, with EA facing a third down at the Malvern 32-yard line, Bush made a six-yard reception out of the flat for a game-clinching first down. McDaniel ran out the clock with a pair of scrambles.

“(McDaniel) was their offense. How he went, they went and he was awesome tonight,” Malvern coach Dave Gueriera said. “He runs hard and their offensive line did a nice job blocking our defensive line.”

The Churchmen (8-0) have two games to go, one on the road against Germantown Academy (6-2) before archrival Haverford School (4-3) comes to town in two weeks. They are two wins away from completing their first perfect season since 2012.

“We worked really hard in the offseason, but a lot of it has to do with Coach Fairlie coaching us up and preparing us for the league,” Adams said. “We haven’t hit our goal yet. We just want to keep working.”