Joslin makes vision of revenge a reality for Marple Newtown 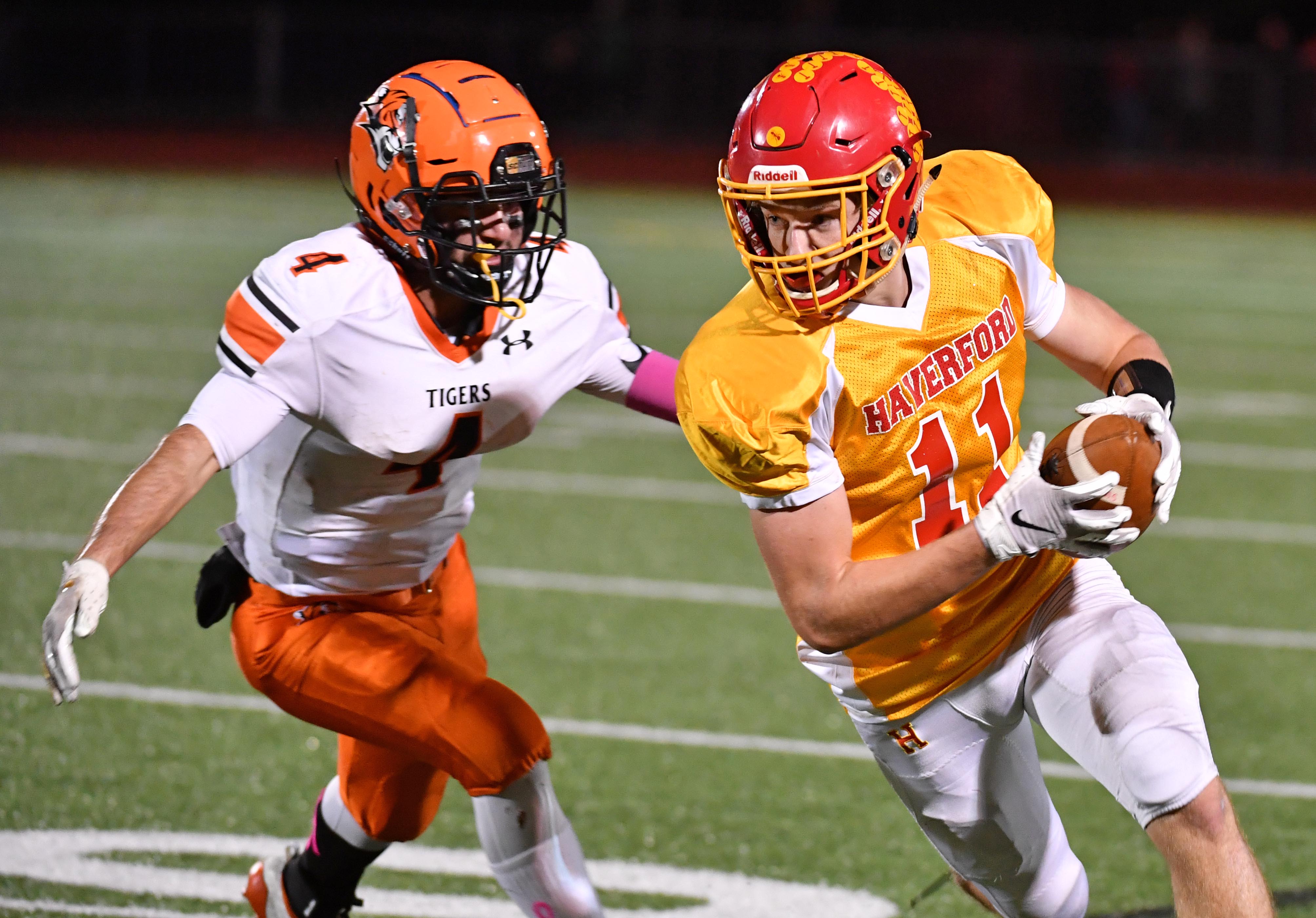 RADNOR — Brian Joslin had a premonition of sorts late in the first half of Marple Newtown’s Central League clash with Radnor.

As the Tigers lined up for a third-and-12 at their 49, with a deep ball dialed up for Neo Vosschulte, Joslin envisioned the result: Vosschulte would go up for the pass, he’d bobble it, and Joslin would be there to snatch it and run to the end zone.

“It’s funny. Going into that play, I pictured it in my head,” Joslin said. “As weird as that sounds, I saw it happen.”

And that’s exactly what happened.

“When he came off, he told me, ‘I saw that happen the whole entire time,” quarterback Joe Paoletti confirmed.

The 51-yard score gave the Tigers a 21-point lead, on their way to a 28-14 victory over the Raiders. The win ensured Marple, No. 8 in the District 1 Class 5A standings heading into the contest, would host a playoff game next week. Radnor entered the night seeded 10th in the district.

Charlie Box gets a shove from behind, and he’s in. Kick is good, 14-0 Marple pic.twitter.com/druqSh4vWb

The Joslin play highlighted everything that went right for the visitors. The Tigers converted 11 of 17 third downs. They scored touchdowns on three of them.

That’s hardly the same offense that put up a goose egg in a 39-0 drubbing at the hands of Haverford a week ago, and surely that result gave them added motivation. But they needed none.

“It’s been 365 days,” Paoletti said in reference to how long his group had been thinking about a 27-25 playoff loss to Radnor in 2018. That game (which took place November 3 — traumatic experiences can warp the mind, quarterbacks not excluded) ended on a last-second touchdown for the Raiders.

The Tigers got started early Friday evening. Charlie Box picked off Sam DiLella on Marple’s first defensive drive, and Paoletti made sure it turned into points. On third down from the 50, he hit Eric McKee, who made a fingertip catch over the middle and ran for a touchdown.

This time the deflection goes Radnor’s way. Austin Stanley gets the pick pic.twitter.com/x9keDZeN1V

The Tigers continued to make big play after big play. Paoletti scampered for 47 yards on their next possession, skipping over a defender in the process. He then found Vossschulte for a 25-yard gain to give Marple first-and-goal. Box finished the drive off.

When Joslin foresaw his serendipitous catch-and-score, it was all but over.

“I just think we took a while to get going,” Radnor coach Tom Ryan said. “I think we’re better than we played tonight.”

To their credit, the Raiders showed life following Joslin’s touchdown. If that was a near miracle, and last year’s playoff win was something closer, then why couldn’t they erase a 21-0 deficit?

A DiLella-to-Reece Evans connection with 13 seconds left in the half started a comeback effort. Then, on the second play of the second half, DiLella threw his best ball of the night. Brendan Surbeck caught it and raced down the sideline for a 57-yard score.

But Marple (7-3, 6-3 Central) wouldn’t be denied. The defense, in search of its own redemption, shut things down, limiting the Radnor (5-5, 4-5) to three first downs in the second half.

Joslin, who finished with 147 total yards (82 rushing, 65 receiving), provided the insurance with 4:22 remaining. He broke through the line and sprinted to the end zone 35 yards away.

Paoletti was stellar. He spread the ball around to the tune of 8-for-16, 157 yards and two touchdowns. He did throw an interception, but it came on a heave to close the first half. The signal-caller made up for it on the other side of the ball when he slid for an interception late in the fourth quarter.

And so the victory was complete for the Tigers. They earned some vengeance and put in a strong showing as they had back to the postseason.

Strangely, Joslin didn’t have a prediction.

“Any game going in, we’re confident,” was all he said.