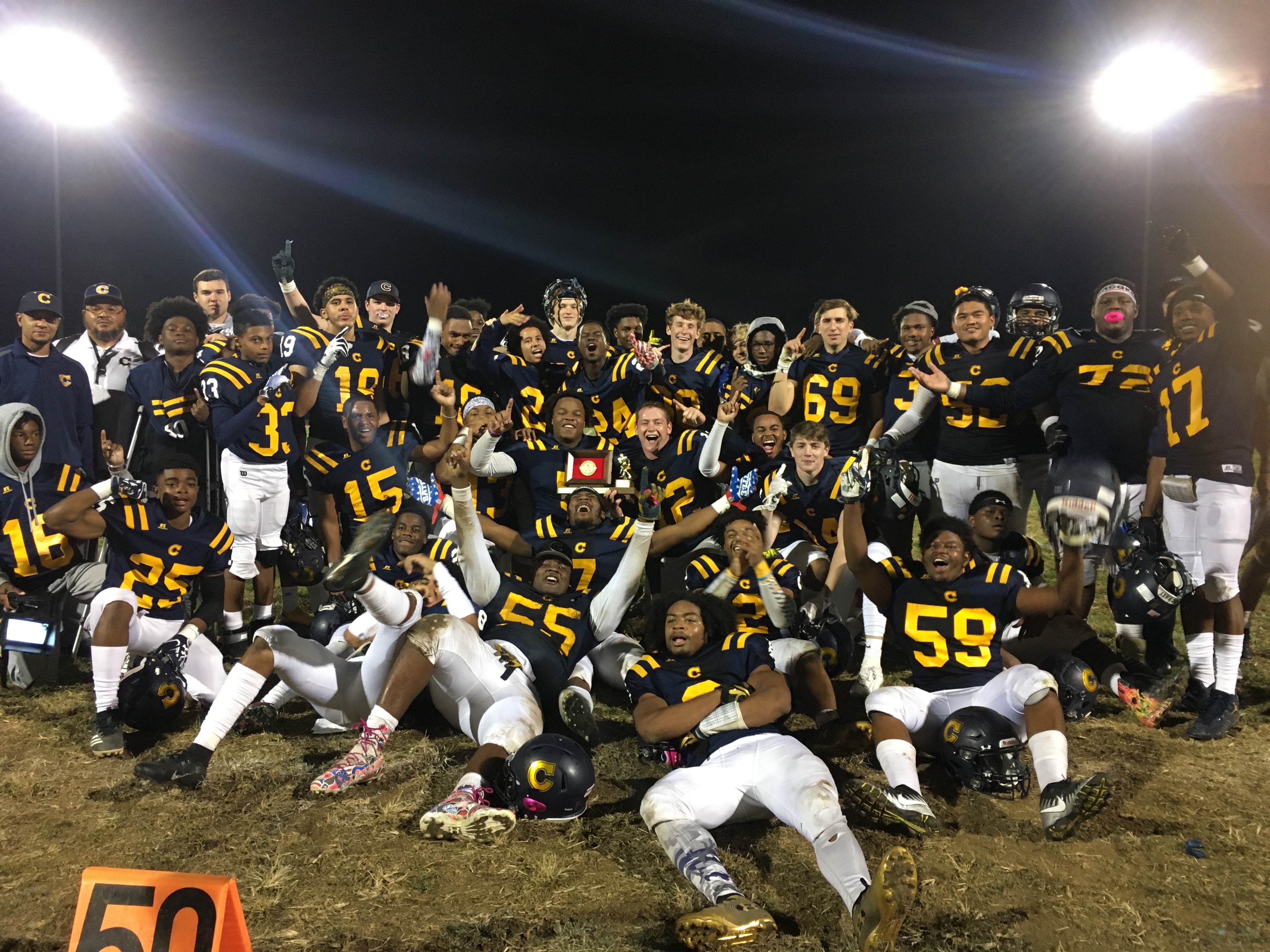 CHELTENHAM >> Adonis Hunter and Nate Edwards couldn’t wait to get their hands on the SOL American trophy.

It was if Cheltenham football coach Ryan Nase couldn’t hand it off soon enough and once it left his hands, the Panthers had it held over their heads, roaring collectively in celebration. For the team’s seniors like Edwards and Hunter, it was an accomplishment a long time coming and they wanted to make the most of it.

Getting the chance to lift that trophy as an undefeated conference champion required some work, as the Panthers used a strong second half to put away Wissahickon 35-17 on Friday night.

“We talked two years ago when were sophomores and said we were going to turn this program around,” senior running back Sidiqq Williams said. “We went from 2-8 to 7-3 and 9-1 and division champions, so it feels great.”

Nase touts the depth of his team and it was thanks to that wealth of options offensively that Cheltenham eventually took over the game. With standout lead running back Jamir Barnes sitting out, Sam Sykes and Williams formed a grating 1-2 punch on the ground.

Sykes, a junior and Williams, a senior, combined for 26 carries, 226 yards and three touchdowns. Sykes had the home run hit, a 72-yard dash for Cheltenham’s first score while Williams closed out the game with a pair of fourth quarter scoring runs.

“We split carries, we knew it wasn’t going to be all on one of us and we trusted our line,” Williams, who rushed 14 times for 80 yards, said. “They made sure they had blocks open for us and we just hit the holes.”

“This is a brotherhood, man, everybody bought it and we do it together,” Sykes said. “We play for each other and play for our brothers.”

Offensively, the first half was a battle of big plays against methodical movement. Chelteham’s first scoring drive was two plays, both runs by Sykes while its second used a 45-yard pass to TJ Harris and a 36-yard pass to Edwards to set up a goal line plunge by Hunter.

Wissahickon on the other hand, had a drive that lasted 18 plays and 11 minutes of game time between the first and second quarters. The Trojans couldn’t finish that drive with points, getting stopped on a fourth-down running play.

Still, the Trojans were far from done.

“I told my guys all week we’re not the same Wissahickon football team people saw in September or even early October,” Wiss coach Bruce Fleming said. “We’re a very different football team and a different program and Cheltenham saw that difference in us.”

The final eight minutes of the first half were a bit of a mess as both teams rapidly exchanged turnovers. Edwards had an interception he ran all the way back, but had the score called off due to a flag. Shortly after, Zahmir Bishop picked off Hunter to curtail Cheltenham’s momentum.

Darenmeen Xayamoungkhoun came up with a strip-sack of Aiden DeFeo, forcing and recovering a fumble to get his team the ball back. That didn’t last long either, as Wiss senior Raejon Benjamin made a superb diving, one-handed pick of Hunter.

Benjamin then got his team on the board with a 15-yard touchdown reception, laying out to get the ball over the line.

Bishop knocked away a deep ball throw into the endzone at the halftime horn and Wiss went to the break down just a score.

“It’s a game of attrition, our guys got tired near the end but we know what we need to work on and we know what our identity is,” Fleming said. “This is what we’re going to be from now on.”

The Trojans only needed one snap in the third quarter to make a game of it again. Senior Jalen Smalls broke through the line and raced 70 yards for the game-tying touchdown.

“I learned a long time ago when I first started coaching ad worked under EJ Smith at Norristown, he always said you’re only as good as your senior class and what your senior class shows helps move your program along,” Fleming said. “I came in when these guys were freshmen at Wissahickon so we all grew together. They leave, not with the win total they wanted or the season they wanted, but knowing they left the program in a better place.”

Cheltenham has been where Wissahickon is now. Nase’s first season ended with a 2-8 record as most of the now-seniors got major reps as sophomores. Last year, things came together during the year, leading to a 7-3 regular season, a home playoff win and a second round district appearance.

With so many seniors back, when the team met last January to start its offseason, the goals were laid out pretty clearly.

“We said we were good in 2018, now we want to be great,” Nase said. “To us, being great meant winning the league and making a playoff run, which hopefully we’ll be fortunate enough to do. I’m still new to Cheltenham but I just learned no team had gone undefeated in league play, so that’s pretty cool to have done. The 1976 team is often regarded as one of the best teams in Cheltenham history, they went 10-1 and right now we’re 9-1.”

Hunter and Edwards connected on the go-ahead touchdown pass in the third quarter and even though Wissahickon hit a 32-yard field goal to cut the lead down to four, the Panthers were back on the front foot. Sykes and Williams both credited the line for opening gaping holes at critical times.

“I want to thank Coach Nase, he gave us a great scheme and I knew it was my time to step up tonight,” Sykes, who had 146 yards on 12 carries, said. “I was glad our line did their job, Nasir Carson and Joe Thomas did their thing and they make running the ball easy and let us do what we had to do.”

Williams didn’t have the big run like Sykes but the senior was efficient at churning up yards and moving the sticks all night. He did rip off a pretty strong 22 yard run for his first score to make it 28-17, then iced the game on a six-yard carry with four minutes to play.

“Once we see the hole, we just hit it,” Williams said. “We’re hitting it full stride, thinking touchdown and we just go.”

On top of an undefeated conference record, the win all but ensures the Panthers will have the No. 1 seed in next week’s District 1-5A playoffs. Nase credited AD Sunil Blackwell and principal Dr. Renato M. Lajara for building community outreach throughout the fall as well as the cheerleading staff, band and parents for supporting the team at every game, home or away

“We all had the mindset that there was no sharing this week,” Sykes said. “I just want to thank everybody, our fans, our coaches. We’re coming.

“We’re not done. We want more. We see something great and we see the future here and if we stay on pace and stay connected, I think we can do some great things.”