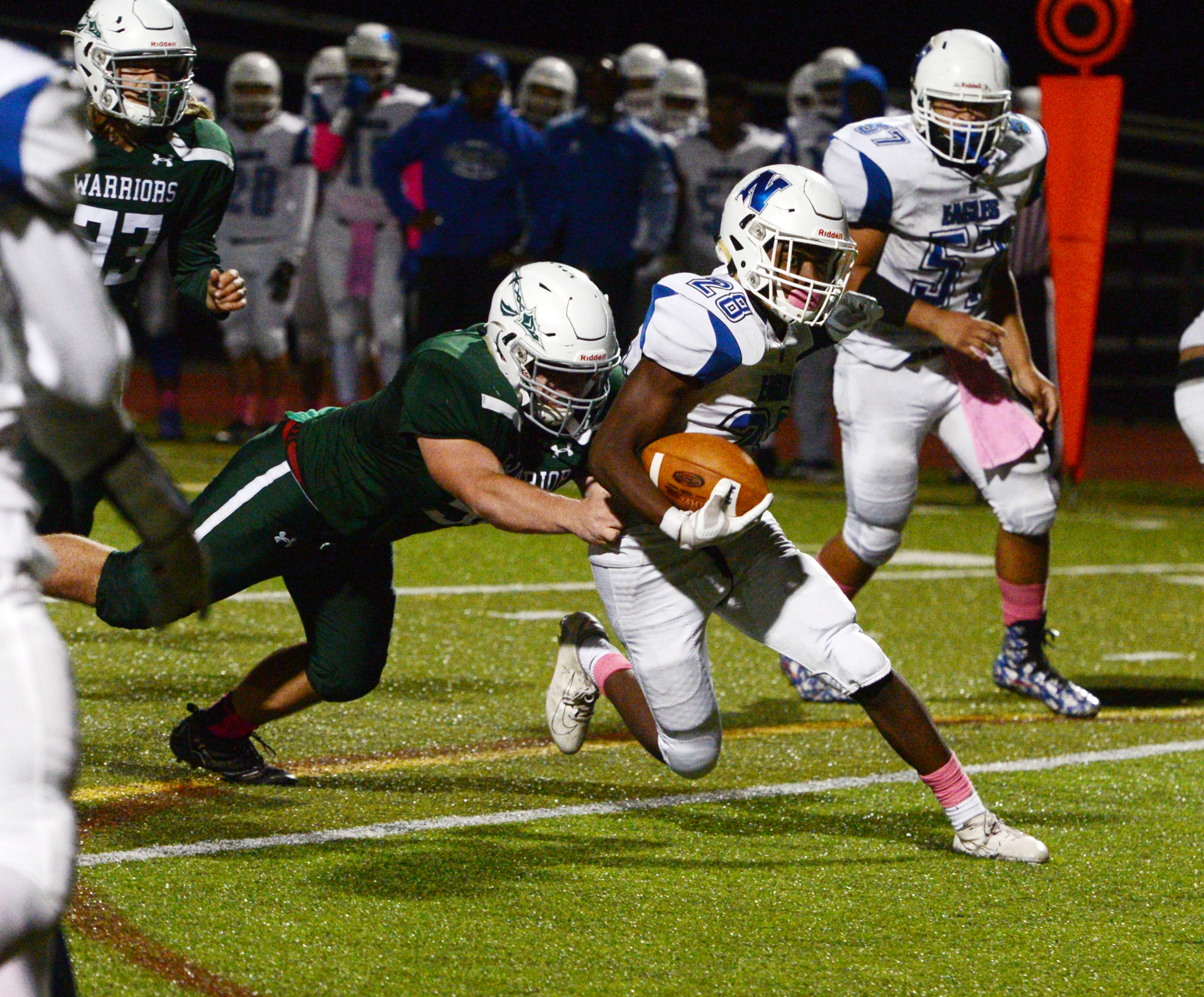 WEST NORRITON >> Zion Malone didn’t need to touch the ball in the fourth quarter to have a career day.

Norristown’s junior running back carried the ball 15 times for 185 yards and four touchdowns in the Eagles 42-21 win over Upper Perkiomen in the season finale at Norristown Area High School Friday night.

“They call me ‘Hercules’ for a reason,” he said. “We had a lot of good blocks out there.”

Malone’s first touchdown came early in the first quarter to give the Eagles (2-8) a 14-7 lead. His 12-yard score was his shortest of the day.

The 5-foot-11 180-pounder really exploded in the third quarter, rushing for 111 yards and two touchdowns in the 12-minute stretch. His third trip to the end zone was from 35 yards away and his fourth covered 49 yards on his final carry of the game.

Malone wasn’t the only one having success on the ground for Norristown. Elijah Twyman eclipsed the century mark, running 10 times for 104 yards.

“Like I said after last week,” Norristown coach Joe Milligan said, “we finally found something we can hang our hat on with those two guys. It’s been a plus having (Twyman). It allows Zion to rest a little bit more and still be fully effective as he plays on defense. That 1-2 punch definitely helps out a lot. We came out, figured we could run the ball. They enjoyed it, they feed off each other. They have a good chemistry.”

Nick Dinolfi added 35 yards on the ground, Isiah Tucker 21 and Thomas Bellmon 17. Steven Haschak scored on a seven-yard run in the first quarter.

“Our line was carrying us,” Malone said. “I don’t know about carrying, but they were putting in a lot of work. They were blowing them off the ball. They knew exactly who to get every play. It was working, for sure.”

“We just had to make some adjustments on the front,” offensive lineman Jamir Seiwright added. “We just ran it up the middle the whole game.”

“We reminded (the defense) what Norristown football is like,” Milligan said. “Come out, fly around and just have fun and make plays. That’s what they did.”

The Eagles held the Upper Perk rushing attack to 109 yards on 31 carries — less than four yards per attempt — and 4-for-19 passing with two interceptions.

Bellmon grabbed an interception in the first quarter and Chris Dinolfi stole Upper Perk’s pass on its final offensive play in the fourth.

Flack does it all

Upper Perk’s Hunter Flack did a little bit of everything Friday night.

The junior quarterback threw a touchdown and could have had a better day than his 4-for-17 passing would indicate but his receivers struggled with some drops. His touchdown was a 24-yard strike to Brady Thompson on third down.

Flack led the Indians in rushing with 47 yards on 13 attempts. He slipped through Norristown defenders throughout the game and picked up three first downs with his legs.

On special teams, Flack went 3-for-3 on extra points.

Ending on a high note

Norristown’s season did not go exactly as it would’ve liked, but after an 0-8 start the Eagles managed to end the season with wins over Boyertown and Upper Perk.

“We won two in a row, for one,” Milligan said. “Two, building a program is going to take a while. Last year we were able to send the seniors off on a three-game winning streak. This year we were at least able to send them off with a two-game winning streak … We found something. We’ve got a lot of young players coming back, which is a huge plus. We’re definitely excited about this offseason and ready to get going with it.”

“The energy,” Malone said, “the feeling that you feel after wins — it’s crazy.”