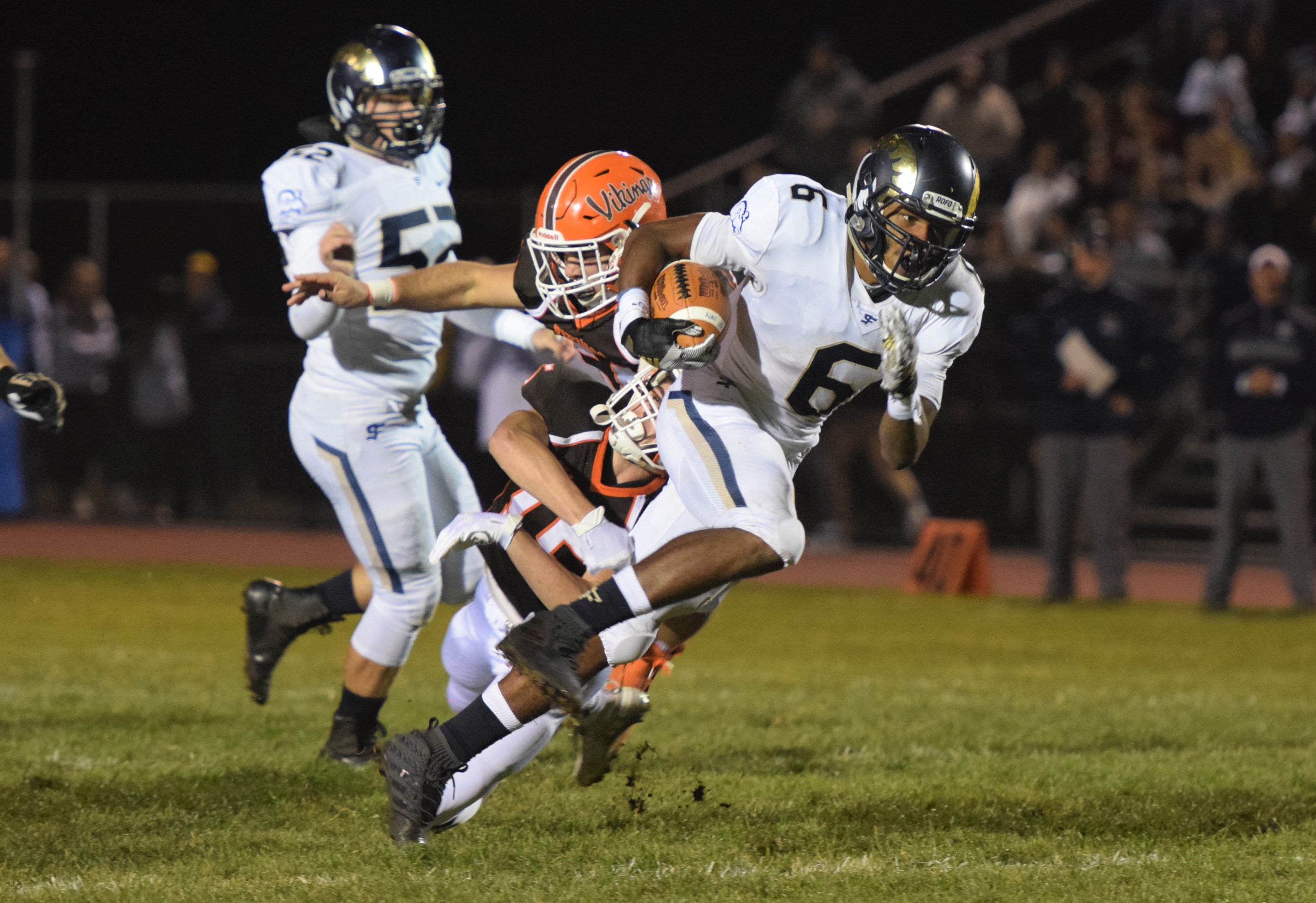 Spring-Ford's Armante Haynes charges ahead on a first-down carry during the first half against Perkiomen Valley. (Austin Hertzog - MediaNews Group)

“We just needed one stop,” said Brubaker, leaving it up to interpretation whether he meant Friday night or in 2018.

This time, the Rams made the stop. Sophomore linebacker Johnny Pergine tackled PV’s Jacob Sturm about three yards short of the sticks on fourth down, and the Rams held on for a thrilling 40-35 victory that put them into the PAC Championship game for the first time since the league went to two divisions in 2016.

On a night with too many heroes to count, it was Pergine’s tackle that finally ended three years of suffering for his senior teammates at the hands of the Vikings. The past four seasons have seen Spring-Ford drop only four PAC contests, but three of them were to Perkiomen Valley.

For Brubaker, the deciding moments were almost too much to handle.

“I was trying to listen in on the defensive headsets on that final drive,” he admitted, “but I couldn’t handle that. Too much chaos.”

Chaos would be an apt description of not only Friday’s contest, but this entire decade of Spring-Ford/Perkiomen Valley football contests. Expected to be an offensive contest, the Rams threw a wrinkle into most expectations when they came out with a run-heavy game plan that saw PAC-leading passer Ryan Engro attempt only 11 passes on the night.

That’s not to say it was a quiet night for the All-Area senior, however, who also carried 12 times for 102 yards and two scores, including a 25-yarder that gave the Rams their final points of the evening and underscored Brubaker and staff’s work in reshaping the Spring-Ford offense during the 2019 season.

Facing third-and-10 from the PV 31 and leading 34-28 midway through the fourth quarter, the Rams got a six-yard carry from Armante Haynes (20 carries, 123 yards, 2 TDs) before Engro kept on a read play and ran up the middle for the 25-yard score that would provide the decisive points. For a team that routinely attempted 30, even 40 passes per game in recent years and even earlier this season, the heavy reliance on the run game in a critical moment spoke volumes.

Haynes from 1 out for TD to up Spring Ford lead to 28-14, 7:37 3Q
Perfect reply for Rams after giving cup late 2Q score @RSenior31 pic.twitter.com/EljYJ5LZpx

Haynes’ 20 carries were predominantly charges through the middle, as he challenged the PV front seven repeatedly, finally staying on the ground for a bit after what would be his final carry, spent from playing both ways for the undermanned Rams.

The Rams burst out of the gate at the opening kickoff, with Kolten Kqira’s return reaching the PV 38. Three plays later, Engro kept on a mesh with Haynes and plowed into the end zone from 16 yards away to give the visitors a 7-0 lead less than a minute into the game.

After a quick three-and-out, the Rams took over at their own 28 and gave the Vikings a healthy dose of Haynes, running the senior back five times in a row before Engro pulled the ball on a second down play at the PV 14 and found an open BJ Beard for a quick 14-0 SF lead less than halfway through the first quarter.

But despite the losing effort, some of Friday’s heroes wore brown and orange as well. At the start of the second period, sophomore quarterback Ethan Kohler was able to utilize all his weapons, finding four different receivers on an 89-yard drive. The last of the four pass catchers was Randy Washington, who carried the reception over to put the Vikings on the board with 5:51 to play until halftime.

It was the beginning of a huge night for Washington, whose speed and versatility were apparent on a five-catch, 117-yard night that saw him hit pay dirt three times on connections with Kohler.

Spring-Ford responded quickly with a five-yard scoring run from Haynes to re-open the two-score lead, but PV’s ensuing drive took only 57 seconds to go 64 yards in seven plays, with Jon Moccia’s one-yard score coming just one second before halftime, cutting the visitors’ lead to seven at 21-14 and with PV getting the ball out of the break, seemingly flipping the momentum going into the break.

But the Rams’ defense would render the point moot.

Spring-Ford’s Dante Bonanni (10) signals for an incomplete pass after breaking up a long pass intended for Perkiomen Valley’s Randy Washington (25) during the second half Friday. (Austin Hertzog – MediaNews Group)

Brubaker admitted coaches tend to overuse the expression “team effort,” but he could be forgiven for falling back on the phrase Friday. Missing five starters from their beginning-of-2019 defense, including leading tackler James Albert, Spring-Ford found not only replacements but contributors from all spots on their roster.

There was Blaize Scarcelle, back only one day after having screws removed from a broken thumb, battling Washington, Mike Dougherty and other PV receivers at one corner.

There were Ryan Kolander and Blake Terrizzi, senior mainstays on the line getting the best of PV’s impressive blockers on several occasions and chasing Kohler repeatedly from the pocket.

There was Dante Bonanni, the PAC’s leading receiver who would catch only one ball all night as the Rams focused on the run, but who filled in for the suspended Nick Teets at safety and tipped away what would have been another sure TD reception for PV’s Washington late in the game.

And there were linebackers Pergine and JSeth Owens, the former leading the team in tackles and the latter taking advantage of an underthrown pass and zig-zag 44 yards for an SF score, re-opening the two-TD lead once more.

In a game that featured 75 total points, such discussion of defense may seem out of place, but it was that unit that told the story of Spring-Ford’s resolve and determination to break their recent run of bad luck against the Vikings.

“The coaches challenged me this week,” said Bonanni. “They told me I’d need to step in at safety without Nick (suspended player Nick Teets) playing, and I just try to fill those shoes as best I can.”

For all his prolific numbers on offense, Bonanni wasn’t taken aback or put off in the slightest by the run-heavy approach.

“When you’ve got this guy running the ball? Come on,” said Bonanni, with a nod in the direction of Armante Haynes. “We had to feed this guy, the way he was running, and we’ll need him the rest of the way.”

“He believed in me,” Haynes said of coach Brubaker. “I listened to him, and he made me a better running back, but above all I trusted him.”

Perkiomen Valley (6-3) will host Pottsgrove next Friday in a battle of divisional second-place finishers.

“Our kids are hurting,” said Heist. “We played a great team, it came down to the wire as it usually does. This time it didn’t turn out our way, but we’ll be ready to go again next week.

“Spring-Ford played outstanding. That’s a great team, and a great program, and we knew we would get their best. We were right there – a couple plays, this thing goes the other way.”

NOTES >> Before the game, Perkiomen Valley inducted new members into the school’s Hall of Fame, including Thomas J. Keenan, for whom the football stadium is named. Also honored were Lisa (Thompson) Angleson, class of 1983; Dr. Joseph DeSimone, class of 1982; and former wrestling coach Charlie Kramer. … Sarah Knorr was named Homecoming queen at halftime.