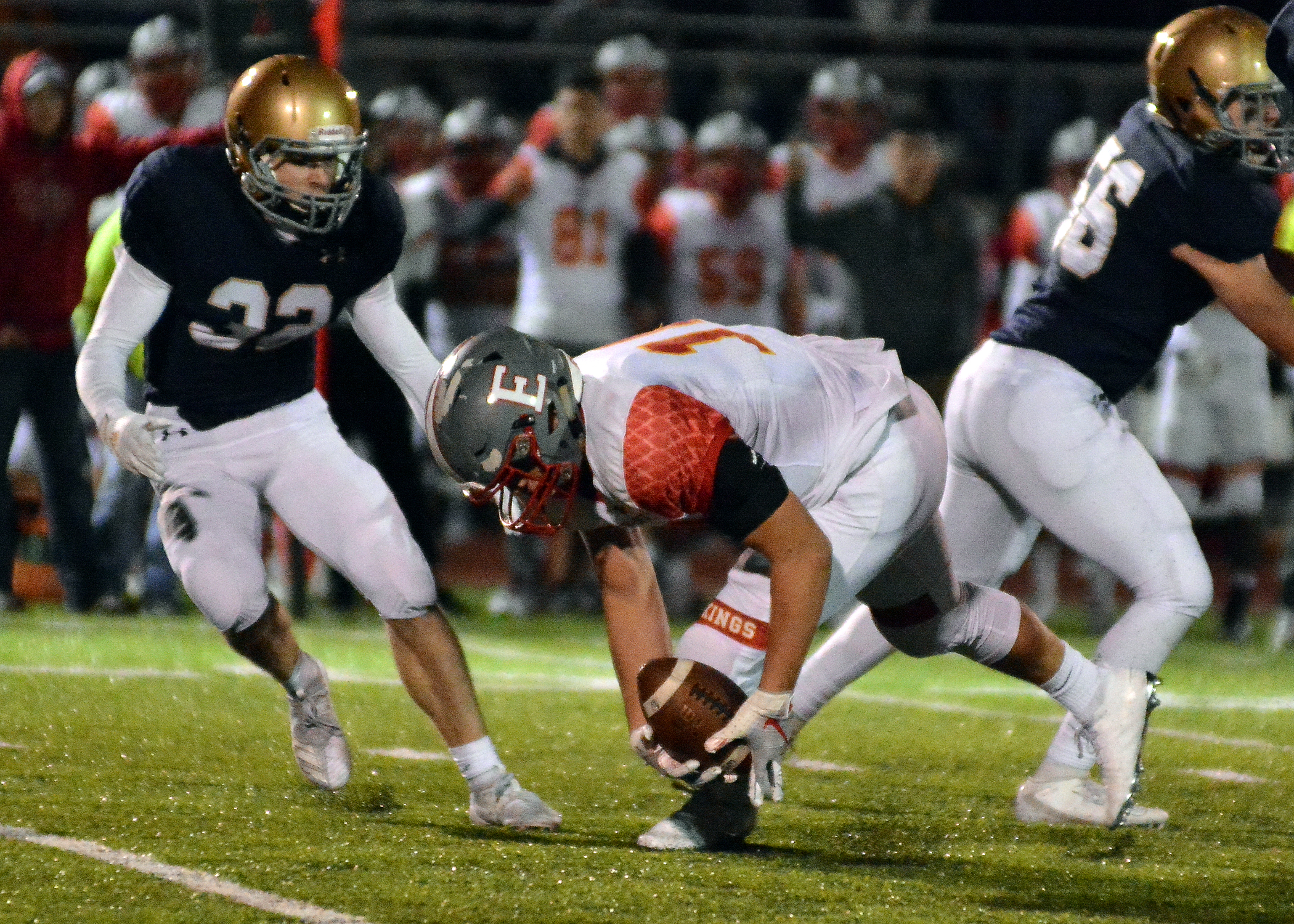 Matthew Treon forces a fumble, one of a number of big plays from the Vikings defense (Bill Rudick for MediaNews Group)

WESTTOWN – When the siren sounded, and West Chester East had not only won the borough, but also secured the outright Ches-Mont American football crown, the ensuing celebration was befitting a long championship drought. It was, in a way, the release of emotion following a 13-year wait.

The Vikings — and a large throng of East fans — danced and hugged, cheered and high-fived on Friday evening. And they did on the home field of archrival West Chester Rustin, who has dominated borough football since opening 15 years ago. The final score was 27-7.

But the biggest cheer of them all came when head coach Scott Stephen broke the post-game huddle with an emphatic declaration: “That’s why they didn’t want us to join the division!”

What transpired not just on Friday but during the 2019 season only reinforced the offseason decision by West Chester East (and Henderson) to shift divisions from the large-school Ches-Mont National to the American, which populated by Class 5A schools. Heading into Friday the Vikings had won four league titles since opening in 1973, but the last came all the way back in 2006.

The football landscape has evolved in the intervening 13 years in favor of Coatesville, Downingtown East and Downingtown West, who have not only dominated the Ches-Mont, but District 1 6A in recent years.

“We feel like in a 10-mile radius there are three of the top-10 teams in the state, and all three of them are in the Ches-Mont,” Coatesville head coach Matt Ortega said recently.

“I think it was a disadvantage for West Chester East and Henderson to be in the National,” former East and current Malvern Prep head coach Dave Gueriera added. “When I was at East, we were playing schools that were a lot bigger than us.

“They should be in a 5A conference. And what’s happened this season absolutely reinforces the move.”

Gueriera spent three seasons as the head man at East from 2014-16, and his final victory came in the district playoffs at Marple Newtown, which was the program’s first postseason win in a decade. Stephen was as assistant coach that season, and when Gueriera went to Malvern, he took over the helm.

“That playoff win certainly set the stage. This senior class were freshmen at the time,” Stephen said.

“It gave the program a taste for what playoff football was like again,” Gueriera recalled.

Three years later, the Vikings become the first program to break through the Rustin-Unionville stranglehold at the top of the National Division.

“After all of the hard work, there is definitely a relief,” said star back Kyle Cichanowski, who gained 151 yards and scored twice against Rustin, and is the county’s leading runner with 1,587 rushing yards and 25 total touchdowns this fall.

Before Friday, Rustin and head coach Mike St. Clair were a combined 18-7 against East and West Chester Henderson. The Knights were also the defending C-M American champs. But that’s all changed. The win clinched the title for the Vikings (6-0, 7-2 overall), and they did it the hard way, beating division powers Unionville and Rustin on the road, and also handing upstart Kennett its only loss.

“(Rustin and Unionville) are two very good programs who have established themselves not only in the Ches-Mont but in District 1,” Stephen said. “So to be able to win this game and be successful is really important to our program.

“Winning West Chester is always important. But it’s Week Nine and we needed to come and play well as we approach the playoffs. We preached that we had to play for 48 minutes and worry about the implications later.”

If there was any doubt that West Chester East was all-in on winning the outright crown on Friday, it became obvious when Stephen decided to go for it on fourth and a yard at his own 40 in the second quarter. The Vikings did not convert, but the defense held off two subsequent scoring chances, including the first of two goal-line stands on the night.

“We wanted to come here and be aggressive,” Stephen explained. “We didn’t get it, but it set a good tone for our guys.”

Reigning champs rarely give up the title easily, and the Golden Knights (4-2, 6-3) certainly didn’t. Despite falling behind 21-0, Rustin cut the lead to 14 in the third quarter and had three cracks from inside the East 1-yard line to slice the margin in half in the fourth quarter, but couldn’t punch it in.

St. Clair spend 13 seasons on Joe Carroll’s coaching staff at West Chester East before taking over as Rustin’s first and only head coach in 2006. He was there when the Vikings won the program’s first three Ches-Mont crowns in 1995, 1998 and 2003.

“Rustin definitely had the home field advantage tonight and it was their Senior Night,” Cichanowski pointed out. “We had to fight for this win.”

East will be heavily favored when it wraps up the regular season next week at Zimmerman Stadium against Oxford. And as long as they don’t slip up, the Vikings will likely host a first round District 1 5A playoff game, and maybe two.

“This will certainly help the cause,” Stephen said of the Vikings’ postseason positioning.

Gueriera acknowledged that when he decided to leave East for Malvern Prep, he was asked to make a recommendation.

“I told them that Scott was a no-brainer choice,” he said.

“I think he’s doing a great job. His players have totally bought in and he is a good guy in addition to being a good coach. Plus he’s a hard worker, so when you combine all those attributes, I’m not surprised.

“East has had some good teams over the years, and this one ranks right up there.”

Pottstown goes for 2, gets it to beat Upper Perkiomen 8-7 in OT
Jackson’s block the difference as Archbishop Wood edges La Salle in overtime
Loading Comments...
Comment
×