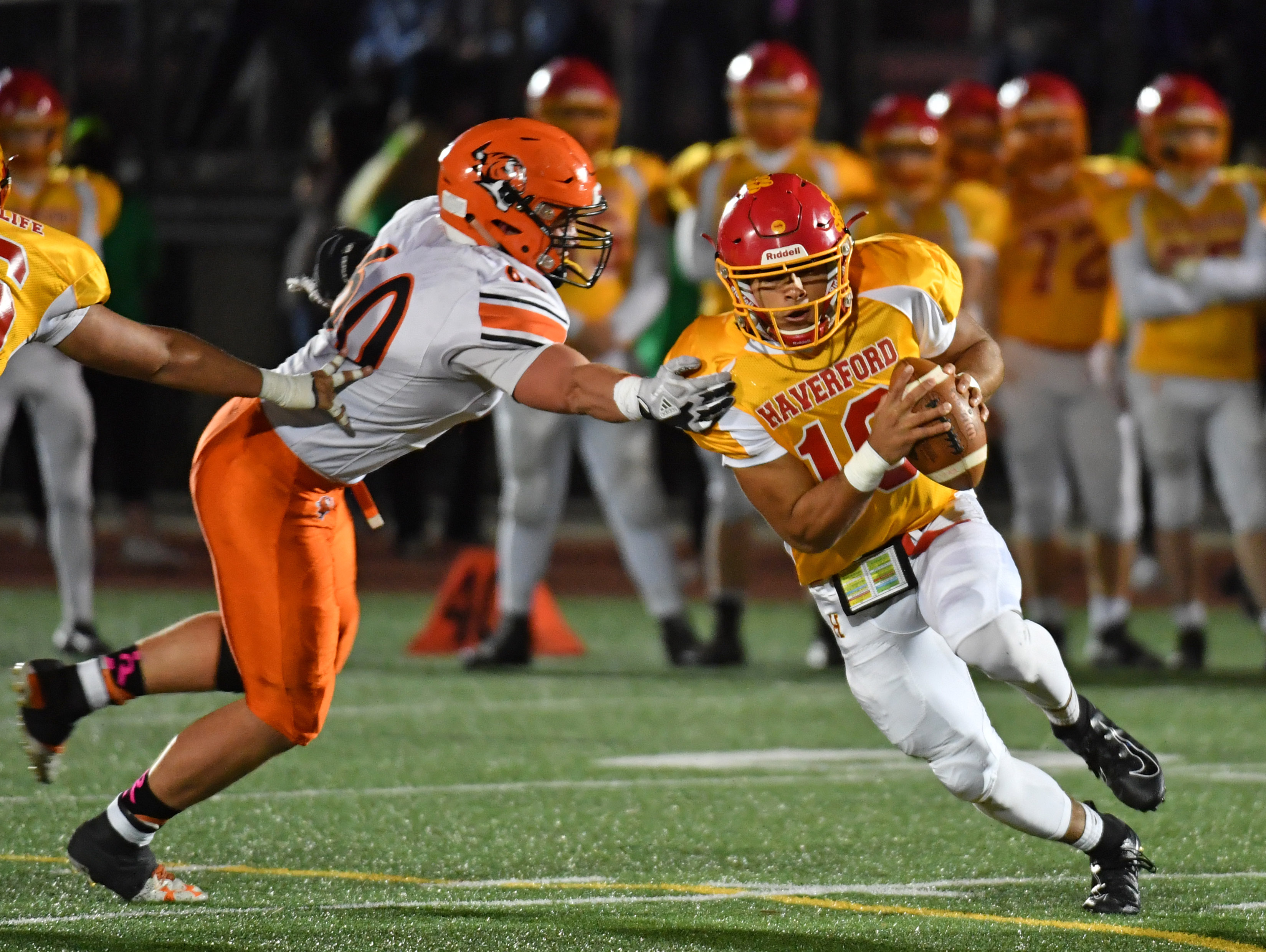 The Haverford quarterback knew the Tigers would key on him, trying to stop the player who entered fourth in Delaware County in rushing yards and first in rushing touchdowns. He knew that, without injured receiver Shane Mosley and with running back Chasen Wint making his return after two games out, the Tigers would know little about the threat posed by Sean Reynolds.

Haverford wide receiver Casey Gilroy, right, is about to haul in a touchdown pass from quarterback Trey Blair ahead of Marple Newtown defensive back Shane Benedict in the first quarter Friday night. The score was the first touchdown in a 39-0 Haverford win. (Eric Hartline/For MediaNews Group)

So as the Fords hammered away on the ground early, utilizing a read-option around Reynolds’ jet sweeps, Blair read the defense to see how they’d adjust. Once Marple shaded toward the threat of Reynolds, Blair decided it was time to call his own number.

Blair promptly ran for 278 yards on 11 carries — including touchdowns of 74, 85 and 54 yards — and the Haverford defense did its usual stingy job in its fourth shutout of the season, turning a battle of two-loss teams into a 39-0 laugher for the Fords’ seventh straight win.

The Fords’ adaptability has been necessitated by injuries, and Reynolds’ part is the latest version.

“It’s definitely helpful having guys like Sean that teams don’t know about really,” Blair said. “He hasn’t had a lot of jets or carries at all. But he obviously can do it and he’s good at it. It’s pretty nice to have guys like that in the back pocket to use if we need it, and they definitely stepped up and performed tonight.”

In total, the Fords (7-2, 6-1 Central League) rushed for 437 yards on 41 carries, outgaining Marple Newtown, 507-78, in total offense. Reynolds had four carries for 44 yards. Wint, in limited action as he gains strength from a knee issue, gained 53 yards, including a two-yard score. Reserve Colin Rezer added a 10-yard score in the fourth.

That crowd gave Blair room to move the county lead in touchdowns to 14; he’s also the first Delco player over 1,000 yards this season.

A tight game in the first half was opened by a moment of Blair brilliance. On third-and-10, he scrambled and, shrugging off the grasp of Marple Newtown lineman Johnnie Ebert, wriggled out of the pocket to hoist a deep ball to Casey Gilroy, who made a great adjustment and hauled in a 37-yard touchdown.

“It was a scramble drill; it wasn’t really a designed play,” Blair said. “I rolled out and saw (Gilroy) open up for a second. He’s a tall guy, he can jump, he’s got great hands. I figured I’d give him a shot, and it turned out well.”

Trey Blair out at the 2, but that spin move tho … pic.twitter.com/EBRzVTgpRR

That would prove to be enough for a defense sculpting a reputation as one of the most fearsome in District 1. The unit has allowed 28 points in their last seven games, blanking opponents more often than it has allowed points.

The defense goes about it with ferocious intensity. Look no further than the massive (and clean) hit that Jimmy Callahan leveled Marple running back Charlie Box with for an eight-yard loss on a pass in the flat in the third quarter, burying the Tigers at the three.

The heart is a trio of hard-chargers at linebacker: Klee, Will Higson and Reynolds. The Fords started in typical fashion, with Higson dropping Box for a five-yard loss on the game’s first snap, then Justin Burgess jumped a corner route to intercept Joey Paoletti.

Though the Fords wouldn’t score off the short field provided, the tone was certainly set.

“This defense is ridiculous,” said Blair, who also plays cornerback. “I definitely have never played against a defense like this before. I have never played on a defense like this before. Just the mentality, the work ethic, these guys are just different. There’s no other way to explain it. You can really tell they’re passionate and love the game of football. I think that plays a huge role in how we’re playing.”

It was the start of a rough day for Paoletti, who completed six passes for just two yards. The Tigers had only seven first downs, three by Haverford penalty. (If there’s one demerit against the Fords Friday, it’s the 13 penalties for 108 yards).

Box was limited to 38 yards on 13 carries; he made four catches for two yards. Marple punted five times and turned the ball over on downs three times.

Even when the Tigers got a break, it didn’t translate. Down two scores, they failed to convert a fourth-and-4 at midfield with 1:12 left the first half, leaving Blair lots of time, three timeouts and a short field. Aided by a 31-yard Blair dash, the Fords reached the three with seven seconds left.

On the final play, though, Shane Benedict picked off Blair in the end zone, and a dead-ball infraction on Haverford carried over to the second-half kickoff.

But after an onside kick failed, Blair took the first snap 85 yards to the house, breaking one line of pressure and vanishing from the Tigers’ sights.

Blair didn’t stay down for long though, thanks in large part to the sturdy defense behind him.

“That definitely put us down, but we ran right into the locker room and got our heads right,” Blair said. “We had a very, very good plan for what we were going to do in the second half. We came out with a bang, and I think that’s what put them to sleep.”