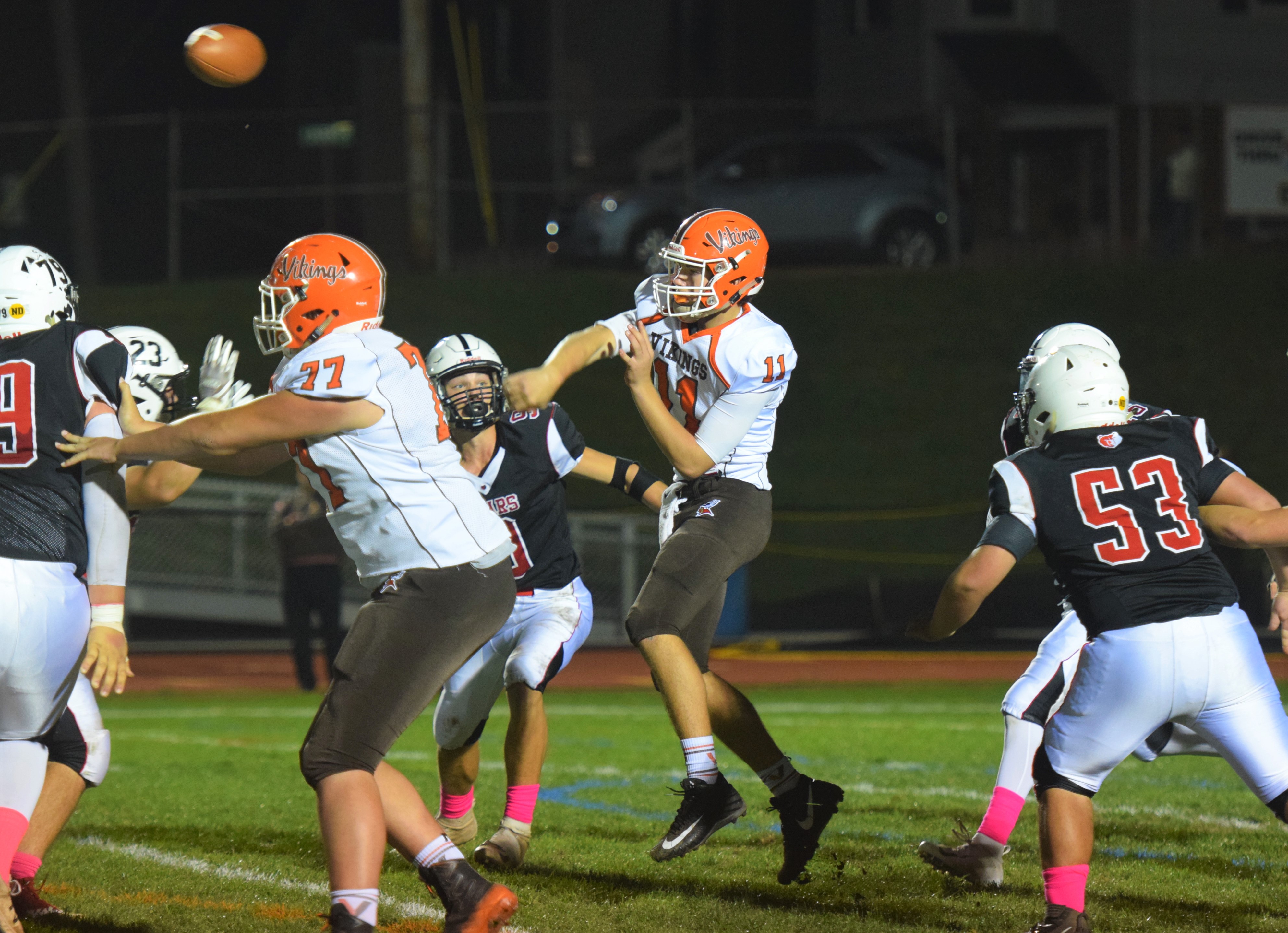 “We’ve been focusing on our mantra, going 1-0 every week,” said Perk Valley coach Rob Heist. “Not looking past anybody. You can’t look past a team like Boyertown.”

The Vikings — the Liberty and league champions all three years since the PAC divided into divisions — scored three plays after a Bear fumble on the game’s first possession, with Kohler hitting Washington with a 23-yard TD pass to complete a 49-yard drive.

Then the Bears put together an impressive 15-play, 63-yard drive in just under seven minutes, pulling to within 7-6 on a 7-yard scoring run by Moccia. Along the way, Boyertown converted a pair of 4th-and-1 plays and had no gain longer than 10 yards.

“They’re tough,” Heist said of the Bears. “That triple-option offense that they run, it’s tough to game-plan for them. They have some nice backs.”

Perkiomen Valley’s Nick McMenamin (2) breaks up a fourth down pass intended for Boyertown’s Anthony Billetta during the first half Friday at Boyertown. (Austin Hertzog – MediaNews Group)

But PV scored on its next possession when Washington grabbed a pass from Kohler and shot past the defensive secondary for a 73-yard touchdown play.

“Randy’s a good athlete,” said Heist. “He made a couple nice catches. And our offensive line was awesome, giving Ethan enough time.”

Kohler connected with Nick McMenamin for a 27-yard TD play with 28 seconds left in the first half for the 21-6 margin. Then the Vikings broke the game open early in the third quarter.

First, Rasheem Grayson fielded a bouncing opening kickoff and ran 68 yards for a score. Then the Vikings quickly got the ball back and Kohler passed 38 yards to Jake Sturm and Jon Moccia ran 18 yards into the end zone to make it 35-6 less than two minutes after the intermission.

Boyertown finished with more first downs than the Vikings (18-13) and ran for 210 yards on 61 attempts. But the Bears had trouble sustaining drives after the early long march.

“I was proud of the way our kids played after that first series,” said Heist.

On the other hand, the Bears — who trailed Spring-Ford by just a 21-20 score at the half last week — again showed that they can compete with the toughest in the Liberty Division well into the game.

“We can,” said Boyertown coach T.J. Miller. “I don’t think our kids understand how close we are. We have some really good leadership in our senior class. They’re one rep away, one sprint away. The difference is settling into the game with some of our younger guys. Our guys fight so hard. They have to do that over and over and over.”

The win moved the Vikings into first place, at least briefly, ahead of Spring-Ford (3-0) which plays Owen J. Roberts (2-1) on Saturday. Perk Valley will host the Rams next Friday night. Last year, PV won the division title by defeating Spring-Ford in the Liberty Division finale, 27-20.

“It’s a special week for us,” said Heist. “It’s an amazing rivalry, one of the best rivalries in Pennsylvania high school football. I know we’re going to get everything they’ve got, and it’s going to be a great football game.”

Wysocki, Reilly help youthful Marple Newtown get back on track
Banged up O’Hara no match for Neumann-Goretti